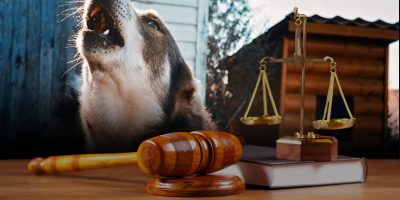 When, like me, you are running one of the leading sources of reliable information on dog breeding, one of the most polarizing topic ever, you hear a lot of good and bad things. There is a stance on dog breeding that is however defended by most people, dog breeders, and animal rights activists included. It is the criminalization of backyard breeding.

Yet, I am writing this blog post to explain why I believe backyard breeding cannot be criminalized and heavily punished by a court.

The first step when discussing this topic is to separate cases of animal cruelty from so-called backyard breeding, puppy farmers and puppy mills.

Animal cruelty is defined as innocent animals being neglected, abused or forced to fight.

Backyard dog breeding has no accepted definition but commonly labels dog breeders who are breeding dogs using substandard breeding techniques and/or in inadequate breeding facilities. Backyard breeders are often described as profit-obsessed people who cut corners on their dogs’ wellness and health.

Now, if a backyard breeder is treating its dog(s) extremely bad, it would be considered as animal cruelty and should indeed be prosecuted under the current legislation.

If we detach animal cruelty that is already criminalized from backyard breeding, you are left with the wish from a lot of people to condemn some dog breeders because they are not experts in canine reproduction, nursing, and care. I’m already hearing all of you (and myself, too) say that «it’s not like in any other field because there are actually living beings at stake here.»

Let’s think about it with another species so we can hold a comparison that may help us understand how slippery this slope would get:

I am purposefully driving my point far because this is the problem: freedom allows a lot of people of doing things they should never have done in the first place. A lot of these words and actions are going to have negative effects on beings of all sorts. Restraining such freedom would lean towards fascism and an impossible to enforce a set of laws.

Unless we are talking about a country’s corpus of Laws, everybody is allowed to have freedom of ignorance. We most definitely all are revolted about it but such freedom is here to stay in our society. And unless incompetence falls into animal cruelty, any punishment seems impossible or even unfair.

Can't We Agree On a Strict Set Of Rules?

Nope, we cannot. That’s the very short answer. To add some meat to my potatoes, how do you want animal right activists and actual good dog breeders to sit down and agree on a regulation? The debate will be heated and not much juice will actually come out of it. Additionally, for almost every single rule or regulation you can make, you will have plenty of counter-examples and exceptions.

This makes criminalizing unethical dog breeding impossible unless you accept placing an undue burden on responsible dog breeders who have been bettering the breed, according to their own definition, since the day they started breeding dogs.

Despite recognizing 189 dog breeds to date, the American Kennel Club is leaving hundreds of other dog breeds on its doorstep. These rejected breeds are, on the other hand, accepted by other huge international kennel clubs such as the Fédération Cynologique Internationale which recognizes over 332 dog breeds.

Plus, we know that purebred dogs can be sensibly more at risk with inherited medical conditions because they are all coming from the very same closed gene pool of the few dogs that started the breed. Kennel clubs are purebred dog registrars promoting the breeding of purebred dogs and therefore, for many, they are part of the problem dog breeding is facing, called inbreeding depression.

A lot of dogs are bred because of their specific aptitudes at performing a particular task, these are usually working dogs. To those breeders, breeding a purebred dog is of very little interest since their mission is not to match an arbitrary standard mainly based on looks, but instead, it is to breed in order to better their bloodline’s purpose and skills.

Sniffing dogs for drug or bombs aren’t bred to be part of a pure breed or to be registered to the American Kennel Club! Instead, each dog is bred to a complementary partner in order to improve the bloodline’s olfactive performance. Same for herding dogs, hunting dogs, therapy dogs, racing dogs, assistance dogs, retrievers, and so on.

Medical conditions affecting dogs can be classified in several ways:

But more than a type of health problem, the way it expresses itself is extremely variable:

Screening binary hereditary conditions is rather common nowadays and it would be easy to enforce such law. However, for everything else, it would be terribly difficult to enforce.

For example, a Sire may have hip dysplasia despite having both his parents genetically cleared for it. What if this dog is also completely clear of all hereditary conditions — would you not breed such a stud despite all the genetic greatness his blood would bring to the next generation?

Additionally, where should we place the cursor on what health conditions are acceptable, especially gradual ones, and which ones are not?

Finally, there are hundreds of dog breeds out there! Each breed is affected by its own set of commonly found diseases and health problems. Such a list is poised to frequent changes thus can quickly become outdated. Who would be in charge of maintaining such a crucial list and even more problematic, what list should mixed-breeds and mutts follow?

Requiring Achievements In Order To Breed a Particular Dog

Speaking of ethics, only allowing champions to be bred is an extremely unethical though. Let’s leave ethics out of this discussion and focus on the principle of breeding champions only. A dog needs several years in order to become a Champion. If it’s a female, she might be past her prime-time thus breeding wouldn’t even be an option.

Like I mentioned above, most dogs who are acclaimed and awarded only are so because they look like their official breed standard’s description. This would encourage the breeding of dogs purely for looks which have caused some incredible problems over the past decades.

On top of that, a lot of dog breeders are breeding dogs for their abilities, and no championships are held to award their skills. They are working dogs doing a great job that is only seen by their owner.

Why Not Cows, Pigs, and Hens Too?

It would be unfair to criminalize backyard breeding for dogs only; and because we have properly defined backyard breeding as the breeding of an animal using substandard breeding techniques, we should also enforce it for every single animal bred in our country. Do you realize this is impossible — especially if we are using health screenings as a condition to breed an animal?

Imagine a surprise test, today, in most slaughterhouses and industrial farms. These animals, for a large part, are full of health conditions and for some of those who are problem-free, it’s mainly because they got packed with antibiotics and other drugs. Let’s face it, it’s just not feasible, or realistic.

My last words may revolt some readers but when it comes down to the essence of this problem, animal reproduction, there is a question we cannot avoid. Who are we to remove a dog, his or her reproductive rights? Because most of the above rules are extremely subjective at best, and totally unfair at worst.

We would basically be ranking animals as per our own subjective definition of perfection and only allowing the top 1% to reproduce. It would bring up a whole new set of genetic issues in the long run, but it’s also completely unethical.

Imagine doing it with humans! Allow a couple to have a child only based on how healthy, wealthy and great looking both are, is a thought none of us could ever have. So why would we do it with dogs?

I wish we could come up with a great way to penalize and criminalize backyard breeding but I don’t see how it could technically happen without penalizing the canine species and ethical dog breeders who have for decades been practicing ethical dog breeding.