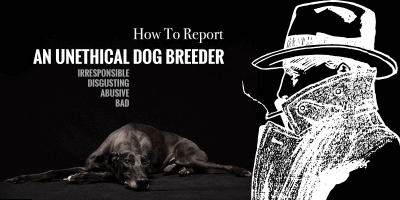 Have you noticed an abusive or unethical dog breeder? This article is for those who want to know how to report a bad dog breeder who is either having low breeding standards or has shown actions of animal cruelty.

On one hand, before we start there is a truth we must explain to you: low dog breeding standards are not illegal, but they can indeed be penalized by some organizations the bad breeder is affiliated with (Kennel Clubs, for example.) On the other hand, animal cruelty is clearly defined in the law and animal abuse utterly illegal and can be severely punished by a jail sentence.

This is why when you are noticing something unpleasant or shocking with a particular dog breeder, you need to be a lot more specific in the facts you want to report than just using words like unethical, bad, cruel, dangerous, abusive, or disgusting. A lot of situations people judge as abusive (breeding dogs back to back, breeding unhealthy dogs) are completely legal.

Don’t get your feelings in the way of what the law says.

What Is Animal Cruelty?

The definition of animal cruelty or animal abuse is physically hurting the animal by any means possible, intentionally or unintentionally.

ASPCA recognizes animal cruelty through a number of common physical signs, such as the following:

PETA looks into the issues in particular for chained dogs that cannot escape the cruel hands of their owner or breeder who abuses them day by day. Dogs that are chained may experience:

Low breeding standards should not be confused with animal cruelty — as unethical breeding has to do with quality whereas cruelty has to do with abuse as defined in the Law.

What Are Low Breeding Standards?

Low breeding standards are defined differently from animal abuse, as it means having a poor rating for being a dog breeder because of various actions or lack thereof, such as:

Breeders must have their puppies or dogs registered in the AKC, UKC, CKC or any governing organization in your country. Therefore, they should comply with their rules and guidelines, allowing you to report them to such organizations if you judge they are failing.

The sad truth on dog breeders is that some of them will be allowed to bypass the animal abuse law because they are not really “hurting” the dogs. Instead, they are obviously and clearly leaving them in unfavorable conditions, which is very wrong to most of us but not penalized as per most legislations. We recently wrote a great article on why unethical dog breeding cannot be criminalized.

Because a dog breeder is only showing poor animal welfare practices in their kennels does not mean you cannot do anything. It just means you cannot prosecute them as is. If a dog breeder is truly honest and responsible, he will share all of the health records and will show you the living conditions beforehand. Breeders who conceal their dogs’ living conditions are often hiding bad hygiene and potential mistreatments.

Dog breeders can be different from each other in terms of kennel management, dog breeding program, and handling their puppies. For some it is a business, for others, it is a hobby. Some bad breeders don’t even have a good reputation in the first place. Either way, breeders must comply with general principles based on common sense. If they don’t, you are entitled to have your opinion and express it, and in some cases, you may report and complain about bad dog breeders.

What may be animal abuse to someone is just a case of animal neglect for someone else. There are different forms of concerns with regards to unethical dog breeders, for example:

For instance, just because you see kennels with poor hygiene doesn’t mean you need to call the police right away. Make sure you know which organization you should call or contact for reporting what you saw or experienced. If you get that wrong, chances are nobody will ever investigate and get back to you.

If you believe that the animal cruelty you have just witnessed could be a criminal offense, you can contact your local law enforcement agency. They should normally be trained to deal with such issues thanks to The National Law Enforcement Center on Animal Abuse. The goal of the NLECAA is to spread awareness to people about animal cruelty and offer means to stop and punish the abusers (dog breeders, or else.)

The organization believes that if a human can hurt an animal then it can hurt another human as well, which is why they agree that breeders or people who abuse dogs need to face the law for charges, especially if the abuse is intentional and serious.

The Humane Society of the United States, or HSUS, is also the partner of the NLECAA when it comes to handling crimes that involve animal cruelty. Videos that are submitted to them by various concerned citizens are taken into action by the law enforcement body. They also train law enforcement agencies across the country on how to act in case of animal abuse.

Recently, they have also featured the BlackBox Digital Witness app, in which reports can be submitted in the form of videos to the National Sheriffs’ Association and will be sent to the local authorities for taking action. You can find out more about the NLECAA and ICEBlackBox here.

Wherever your locality is, you can contact a local shelter or animal rescue organization, such as the LA Animal Services for those in Los Angeles, or the Arizona Humane Society if you live in Arizona. Nearly every state in the U.S. has some governing body or animal rescue organization for you to contact in case of animal abuse, especially dog abuse which is one of the most common. Some organizations are city-based, making them a closer interlocutor if you feel the need to complain.

Most reports to the local shelter or rescue center are due to the mishandling of dogs or being kept in poor condition by their owners or breeders. Some reports involving dogfighting and other forms of violence may be forwarded to law enforcement by the shelter. Such organizations have some quicker channels than commoners when it comes to liaising with the local police department.

However, in the event that a local shelter being abusive to dogs itself (and possibly other animals as well), you can try contacting the Animal Legal Defense Fund (ADLF) to address the situation. They will relay your evidence, such as a photo or video, to the authorities for further investigation.

In case of a lost or missing dog, or even with a case of animal abuse that was dismissed multiple times by the police and other organizations, you should contact local newspapers or even national news bodies such as ABC News and the New York Post.

Media publishing will also help spread the awareness of animal cruelty and put the offender to shame and because of the number of reports and requests they receive daily, you should get much luckier with a local media outlet, be it print, TV or radio.

Ideally, you do want to provide them with clear details such as compromising photographs or any other proofs you can come forward with. Having your word only will make it difficult for them to make it worthy of a mention. Media love a shocking image so it would be the ideal approach, but don’t put yourself in an illegal zone by trying to take a picture (always respect the law yourself.)

Humane organizations are one of the last resorts if the police don’t take action. PETA currently accepts various forms of animal abuse with the use of this reporting form. You will be asked to fill in some details, as well as some photo evidence.

In addition, the Humane Society also accepts reports of chained dogs, abandonment, neglect and the like; find out more here. They are closely affiliated with law enforcement teams around the United States so contact them if the severity is lower, and contact the police directly if it’s extremely serious.

The AKC’s Investigations and Inspections Division can also be contacted when it comes to dog registration and information about the breeder to see if dogs are living in proper condition. The standard penalty for anyone convicted of animal cruelty involving dogs is a 10-year suspension and a $2,000 fine.

Obviously, the American Kennel Club should only be contacted in cases of animal neglect, poor kennel hygiene, and worryingly low breeding standards.

Before you go, it’s important to highlight some very important takeaways from this article:

And, in order to be convincing, you need to build a case without crossing the line yourself. Don’t enter anybody’s property without being invited. Don’t steal anything from anybody. And obviously, it would be very helpful if you could try to take compromising photographs showing the abuse or the lack of hygiene, for example.