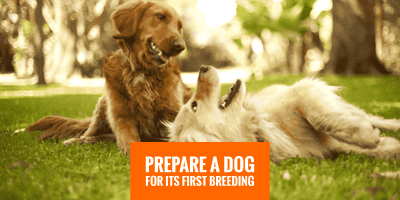 Dog breeders with experience will always tell you how important it is to prepare a dog for its first mating ever. Especially if the dog is young, whether it is a male or a female, your dog may panic, run away, become too agitated, or even hurt itself or its breeding partner.

When breeding two dogs, the mating and copulatory tie are very stressful situations for both the stud and the female. As the male is locked inside the female, both are stuck together are completely unable to run away. And if they do, they would end up hurting themselves and their partner, enduring a lot of pain doing so. This is why it’s important for you to get both dogs ready to remove most stress factors from the equation when the time comes for both dogs to engage in their coitus.

If you are breeding your dog for the first time there are many factors to consider to help produce a healthy and active litter of puppies. One of the many aspects of breeding a bitch for the first time is to make sure both are as comfortable as possible with the partner you have chosen for them. Responsible dog breeders believe that each litter that they breed should be an improvement on the parents and one of the ways to ensure this is to create a comfortable breeding experience for both dogs. It’s important to find a compatible mate for your bitch and the best way to narrow down your search for the ideal mate is to introduce the dogs before the breeding day.

Introduce the Mating Partners Prior to Mating

To do this we would suggest arranging several meetups for both dogs a few weeks before the mating day. This is so on the breeding day, both dogs are comfortable and happy to see each other rather than anxious or frightened at the other stranger animal. These meetings can also be a great way to analyze if the stud and bitch have similar pleasant dispositions, increasing the chances that these traits can be passed on to the litter if they mate. Even one initial meetup will help provide a more comfortable atmosphere for the dogs on the breeding day and will make the animals less anxious as they may have played and gotten to know each other’s scent during their introductory meeting. This may also speed up the mating process as the animals will have already became accustomed to each other and therefore will be less anxious than if they just met for the first time.

Creating this safe and comfortable environment for both the stud and the bitch with this introductory meeting will increase the chances of successful breeding as one of the most important factors during the breeding day is to ensure the dogs are relaxed and happy in their environment. This will also allow you as the breeder to be in a better position as you will know both animals are compatible and ready to mate.

Organize the Breeding in Known Territory

Now that both dogs have been introduced and you are happy with the first meeting it is time to arrange the breeding area. As it is your dog’s first breeding it is vital to make them as relaxed as possible, to do this it is advised to arrange the first breeding in your home. Breeding days are usually carried out at the stud’s residence because taking a male outside of his normal environment can cause insecurity and make his attention wander. The dogs should be given a private enclosed area with good footing, preferably outside with weather permitting, where they can breed without distraction.

Normally, only two handlers should be present, preferably the owners of each dog. The mating process cannot be rushed. The dogs may need hours or days to become comfortable with each other even with an introductory meeting as it is a first time experience for at one of the animals involved. If you are the owner of the female, you can always bring a blanket or toys from home so that they can have a familiar scent around them which will help them in a new environment.

While the dogs are in the breeding area they should be supervised at all times to ensure their safety, usually with both on a leash and with the female gently muzzled, especially if she is a virgin. However, muzzling the female means that if she is in pain or unavailable to be mounted yet, she has no efficient way to say so. It’s a risk and we do not recommend that for everybody.

Talking to the dogs in a soft, encouraging voice can help them feel secure and comfortable. They should never be disciplined and loud noises or voices should be avoided in the breeding area to ensure both dogs are relaxed in their environment.

It is also advised that no other dogs should be allowed in the breeding area as they may cause a distraction for the couple mating. Jealousy can also occur if the couple is not separated as two males may fight for the female or for the attention of the owners. The most effective area for a first time breeding will be in a private area preferably where the male lives and with little distractions for the couple mating. The more relaxed the animals are the more likely they will be to breed successfully.

Find an Experienced Partner For Your Dog

If it is both dogs’ first time ever, chances are they may both get very anxious and unable to actually reach intercourse. There is a range of difficulties that can happen during the mating process such as aggressivity during the introduction, both dogs being shy, female yapping the male, male unable to mount the female, etc. That is why if your dog has never bred before it is advised to find an experienced mating partner. This can alleviate some of these common difficulties that can happen especially if it is two virgin dogs that have never mated before. The proven stud or bitch will guide your dog with confidence as it will have previously experienced the breeding routine. This can be very helpful for the first time breeder as when it is two virgins it can be quite time-consuming for everyone involved and puts more pressure on the dogs to mate.

[pullquote-right]Do not show signs of impatience, even if you must wait a few months for the next attempt. You are dealing with animals, not machines.[/pullquote-right]

When you are choosing an experienced partner for your dog it should always have a well-documented history, which should include the history of their parents and siblings. The dog’s pedigree should pay particular attention to any genetic or potentially hereditary disorders in the male or female, as well as in their parents and offspring. It is vital to remember that responsible breeders should never compromise their dog’s health for monetary reasons so it is important to do extensive research into choosing your dog’s partner. The breeding age range suggested by the Kennel Club is that female dogs should not be bred before they are 2 years of age, which is when most of their health tests can be done, and they should only be bred once again (if ever) after their next heat cycle.

Similar to female dogs, it is also not advised for studs to be bred before two. As stated it is very important for a dog especially larger breeds to complete their own growth before siring puppies. Heart problems and hip and elbow dysplasia are more common in the large breeds but can still appear in smaller dogs. Some of these problems will not surface until a dog has reached its adult size. As these health issues may not be obvious it is vital for male dogs to reach full size and maturity before allowing them to breed. The age and health of the experienced mate you choose should always be considered so that healthy puppies can be produced and your dog is not put at risk for monetary reasons.

Do Not Become a Distraction

As a dog breeder, we tend to always want to be around to monitor the breeding process, especially when it is your dog’s first time mating. It is advised to keep an eye on the couple, making sure no problems arise such as issues with penetration, locking problems or general aggression from the dogs. However, if there are no visible problems, then you should try to remain invisible.

Indeed, your dog will see you as a huge distraction if you are hovering around the breeding area, they will want to play and interact with you rather than their mate. This is why it is best to keep in the background and try not to interfere with the natural mating process. If your dog sees or hears you their attention will be focused on you and what you are doing which can delay breeding.

However, if your dog as a first-time breeder is distressed in the situation you can speak to them in a low tone as previously advised as this can comfort the dog. This can create a calming atmosphere for the dog in their new environment. Breeding can be a lengthy process so even if the dogs are not mating quickly fight the urge to get involved, the process can take hours sometimes even days but if you act as a distraction you will lengthen the process.

It May Take More Than One Attempt

With a first-time breeder, mating can often take more than one attempt, be prepared to come back the next day or to arrange a second or third try as the dogs get to know each other and become comfortable in their environment. An inexperienced breeder may need more time and patience to successfully mate. One of the ways you can help the dogs to mate is to assist them with positioning if one or both animals are having difficulty with this.

The mating process can take dozens of minutes, while the stud mounts and the two dogs play around and switch positions. The actual insemination mount can take as little as five minutes and as long as an hour, during which they will not be able to separate due to swelling of two glands on each side of the penis. Make sure there are no loud noises or other interruptions to startle them. If they are startled and attempt to pull apart they can hurt themselves. The dogs separate naturally when the swelling goes down.

If the couple does successfully mate it is important to prevent the bitch from urinating for about thirty minutes after mating to save as much semen as possible. It’s a good idea to provide her with a crate, where she will be less likely to urinate. If you are the owner of the main you can also check to see whether or not the stud’s penis has retracted into the sheath. If it hasn’t, don’t force it. It could take thirty minutes for this to happen naturally, but be sure it does.

Breeding is a lengthy process but the best way to increase the chances of successful breeding is to ensure your dog is healthy, happy and comfortable in their surroundings. This can take several attempts to achieve but will benefit you as a responsible dog breeder and will ease your dog into the role of a mate in a pleasant environment.

Once the pregnancy is successful, you may want to also learn how to prepare and take car of a female dog during her first pregnancy.