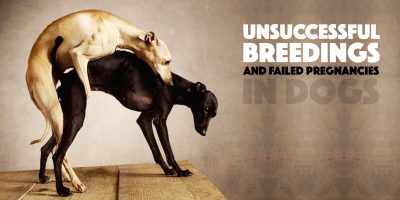 The breeding of your favorite female and male dogs was organized properly. The mating of the two dogs happened but pregnancy failed and did not occur.

Unsuccessful pregnancies in dogs are commonplace in the world of dog breeding and dog showing. Generally, dog breeders will put the best effort into planning the copulatory tie. Yet, few days or weeks later, when it’s time to confirm the pregnancy, breeders realize that the dam is not pregnant at all and the breeding failed.

Breeding dogs takes a lot of effort and knowledge: it has to be organized at the right time with both dogs at the peak of their form. And even with hindsight, it is hard to understand what went wrong in a particular mating. This is why we made this article so you can get some pointers.

Breeding occurred at the wrong time during the heat

Female dogs come into heat on average twice a year for their entire lifespan. Of course, that is just an average and there can be much variance depending on breed and a particular dog (see our FAQ about heats in dogs.) Some perfectly healthy females may come into heat only once a year or others even three times a year.

Nevertheless, the basic biology of a female dog and its mate will determine if a pregnancy occurs. If a male dog has copulated with a female in heat and no pregnancy has occurred, one of the reasons may be that the male dog was introduced at the wrong time. A successful pregnancy will only occur if the sperm was able to fertilize the female’s eggs. The sperm of a dog is vital for 9 days after ejaculation. A female dog will ovulate and her eggs will be ripe and in position for conception an average of 5 days. These two viable times must coalesce for a pregnancy to potentially occur.

In female dogs, the first stage of heat is referred to as the proestrus. During the proestrus, the female dog will typically have the bloody discharge, swollen vulva and the pheromones that will attract male dogs. However, no ripe eggs are available yet for fertilization. The proestrus phase lasts approximately 9 days, and gives way to the second phase called the estrus. It is during the estrus phase that ovulation occurs,and eggs travel from the ovaries to the uterus.

A female dog may be receptive to males prior to her body’s ovulation. In fact, the same hormones that make her receptive are, also, stimulating her ovaries to produce her eggs. Sperm introduced before ovulation and the maturity of the eggs may lose vitality and no pregnancy will occur. This kind of timing failure happens so frequently that many breeders introduce the male for a second copulation a couple of days after the first one. Of course, copulation or introduction of sperm after the eggs have lost viability will not result in pregnancy either. This kind of problem may happen if the period of heat exceeds the average 2-4 weeks and breeding is attempted in a waning and non fertile day. Extra-long heats may happen in healthy female dogs but can be symptomatic of things like ovarian or uterine cysts.

Female dogs, too, may have silent heats in which there are no signs of heat, or split heats in which a heat started, then stopped, then started again a few weeks later. These variations make the breeding of a female dog sometimes seem more like an art than a science.

The coitus was interrupted before ejaculation

Another reason impregnation may be unsuccessful could be that the coitus was not long enough for the dog to ejaculate.

A dog that mounts a female dog must be able to penetrate the female’s vulva with his penis. The penis of a dog does not become erect prior to copulation. A bone within the penis aids in the penetration of the female. A penis becomes erect and swollen when fully inside the female dog’s vagina. Ejaculation occurs only then. Any interruption of mating before ejaculation will not result in a pregnancy.

During the copulatory tie, both the male dog and the female dog may have their own reasons to move away and cease the coitus. Stress, pain, and inexperience, are all common reasons why a coitus can be stopped. Obviously, the breeder and the environment may also cause the dogs to stop the matin before the sire’s ejaculation.

The stud dog has fertility problems

Most male dogs produce healthy sperm and in sufficient number and vitality to impregnate a female. However, if sperm is of poor quality (infertile) impregnation may not occur. Stud dogs in poor health and dogs of advanced age may not produce healthy sperm capable of impregnation. The medications and treatments of some illnesses (e.g. cancer) often lower the sperm count and negatively affect a dog’s sperm vitality.

Complete male infertility is not very common in dogs but does happen. A veterinarian will need to determine its cause, and in some cases, it may be reversible. Infections from the canine herpes virus and brucellosis can cause male infertility and must be treated. Brucellosis is a particularly bad infection since it is contagious to other dogs and can even infect humans. Other bacterial infections in the reproductive or urinary tracts may cause infertility and will require antibiotics.

Hormonal disorders in male dogs may result in low sperm counts. Low thyroid is one of those conditions and is treatable. Other problems in a dog’s anatomy including physical injuries to the testes, tumors in the testes or prostate gland can make insemination of the female impossible.

The bitch is infertile

Finally, female dog infertility is a problem that may have a myriad of causes. In general, it is easier and cheaper to rule out timing issues, and male infertility than dealing with female infertility.

Most of the causes, nevertheless, will have to be dealt with or the female will eventually show signs of illness. A female may be infertile because of abnormalities in her reproductive organs. Again, a veterinarian is essential here. She may have ovarian or uterine cysts. She may have tumors both cancerous and benign that block or prevent healthy fertilized eggs from their travel from the ovaries to the uterus. X-rays and/or ultrasound scans will need to be used to visualize these kinds of reproductive abnormalities or problems.

Infections like canine herpes and brucellosis will cause infertility in female dogs as they do in male dogs. Any infections in the reproductive tract of the bitch may render her infertile. Regardless of breeding, these infections need to be treated by a veterinarian. A history of uterine infections, also, can lead to scarring in the uterus and cause infertility later on. Too many back-to-back breedings of a female can tire her body’s support system, too.

Hormonal imbalances may also cause female infertility. There is a complex chain of hormones that are all necessary for the healthy production and release of eggs ripe and ready for insemination. Any abnormality in the organs producing these hormones may render the female dog infertile. Such conditions as hypothyroidism, or hyperadrenocorticism, or too little thyroid and too much cortisol from the adrenal gland, can cause female infertility. These conditions usually have other symptoms so a veterinarian is likely to spot and test for them.

Other hormonal problems related to the ovaries like progesterone levels may require a bit more detective work. These may be asymptomatic except for infertility that they cause. Sometimes premature ovarian failure occurs in a young dog. In this unfortunate condition, the female dog’s ovaries stop functioning for no obvious reason. Premature ovarian failure may be genetic and is irreversible.