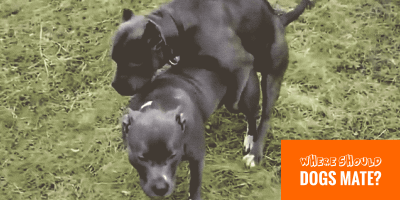 When you are planning a future mating with an external dog breeder, there is always a dilemma on where should the breeding take place? Is it better if the dogs mate where the female lives, or is it better to bring the female to the stud?

Whether both dogs should be breeding at the dam’s place, at the stud’s place, or using artificial insemination with shipped semen is a matter of common sense, leverage, and paperwork. Just like most questions pertaining to dog breeding, there is no single good answer here. Every relationship has generally somebody owning more leverage and it is no different between two dog breeders partnering up for a breeding. The decision commonly belongs to the most experienced breeder out of both.

When Should Dogs Mate at the Female's House?

Many variables will make the bitch’s house the best place for mating to occur. Of course, the impregnation of the bitch with the least distress to either dog is the best place to be. A female that has never been bred before may require the presence of the breeder or the person she has the most familiarity with in order to accept the stud. Females many times will become distressed after the tie. The owner of the bitch (or the person she’s most familiar with) should be present to reassure her. Bitches need to be steadied by their breeder during the tie to prevent injury to either dog. A breeder who is infirm or otherwise unable to travel with the bitch may make it necessary for the stud to come to the bitch’s house.

The owner of the stud may not have the space to board the bitch, or the owner of the bitch may be unwilling to relinquish control of the bitch to the care of the stud owner. A bitch in heat transported outside of her protected environment will attract male dogs of all breeds for miles around. An irresponsible stud owner may subject the bitch to a setting in which she is vulnerable to misalliance. If that happens, it will be two months (or the 63 days of the dam’s pregnancy) before a (incensed) bitch owner finds out that something went wrong in that mating. Some bitch’s owners want maximum control of the process.

If the bitch is a very valuable animal, the risks of transportation (in both just injury and disease) may not be acceptable to her owner. Airline transportation can be especially worrisome to the owner of an expensive bitch. In 2016, the Department of Transportation reported that 26 animals died while being transported on airlines (download the PDF.) Worrying statistic if you love flying United Airlines, an article by USA Today states that the airline company accounted for a third of animal deaths on domestic flights over the last five years. As you can understand, it may be worthwhile to the bitch’s owner to pay an additional fee to have the stud transported to the bitch for mating. Again, this can be done and contracts can be entered into for the stud to come to the bitch.

Finally, an experienced stud with a maiden bitch may be more successful if she is in a more familiar less distracting environment. A maiden bitch that has a generally submissive nature and is not territorial gives the proven stud the opportunity to stake out his new territory. The assertiveness of the stud and the species drive to mark territory will work in favor of a stud mating with the bitch.

When Should Dogs Mate at the Male's House?

Most stud contracts have provisions for the bitch to come to the male. Dogs are more sensitive to changes in their home environment than the bitch, they are extremely territorial by nature. Dogs can get skittish and distracted in a new place with new smells. The stud needs to be the most assertive one if a successful mating is to occur. A dog put off and distracted will not be as focused on the task at hand. Dogs that have not be bred before are especially susceptible to stress and distraction of a new locale.

In addition, the bitch is usually the more aggressive animal if left on her home turf. A dog brought to the bitch’s house may be treated more like an intruder than a suitor. She may nip or even bite a dog. Fewer of these kinds of scuffles will occur if the bitch goes to him. Neither owner wants their animal injured in a mating so such an agreement is usually the right one to do.

Some male dogs may need a helping hand to mount the bitch. This assistance is best provided by the sire’s owner or someone the dog is comfortable with. If the breeder is unable to travel and the stud needs assistance, the male’s house will be the place to do it. Some breeds (e.g. English Bulldogs) will need this kind of human intervention routinely. In other cases, an individual dog may need this extra help. An older dog, for example, may need the steady hand of a familiar person because of a bit of arthritis in hips. Arthritis in the hips of an older dog may make him more awkward and less enthused about mounting, and the pain may put a definitive stop to any breeding. If the mounting is uncomfortable, the older dog may not even complete the insemination after mounting the bitch. Young dogs being initiated, too, may need that extra help from their breeder.

Practical reasons, also, play their part in this common arrangement. Stud services may be ongoing to more than one bitch at a time. The kennel owner may even be mating his own bitches to him. Most bitches have only two opportunities to travel a year: while in heat. A stud dog could easily rack up some frequent flyer points. It would be terribly inefficient for a sire to travel around the country for various matings. The risks of fatigue, injury, disease and death to a valuable dog would be an unacceptable risk for the dog’s owner who could simply receive the females on his own land.

Another practical reason is that the bitch’s owner is the one who stands the most to gain from the mating. A shift in expenses to the dog doesn’t make good business sense. The owner of the bitch will want to to control the expenses involved in travel. The cost of each puppy can reflect all the expenses of mating. A stud’s owner would have to charge more for stud services if that cost involved travel. If the stud did the travelling and the bitch’s owner was paying for it, the stud’s owner may decide to stay at the five star rather than two star hotel.

When Should Artificial Insemination Be Used?

Artificial insemination is very common in cattle husbandry and it is becomingly increasingly used by dog breeders, and not just of champion specimens. The American Kennel Club has standardized the steps that must be taken in order for a litter produced by artificial insemination be registrable. In artificial insemination, the semen of the dog is transported and manually inserted into the vagina of the bitch by syringe or by surgical implantation. Generally, anywhere between 1.5ml to 8ml of a male’s sperm will be collected depending on the female’s size.

The stud’s semen may be used:

Artificial insemination should be used when a bitch becomes overly aggressive with dogs, and prevents mounting. Some bitches have this problem, and one of the solutions to it would be to use fresh or frozen semen. Dogs that have medical conditions or arthritic hips that make mounting difficult can have semen extracted and shipped to the dam’s owner. Breeds that have problems in natural mating like English Bulldogs can improve mating success by use of artificial insemination. Breeders who want to prevent stress or injury to valuable animals may not want to put them through the process of a natural mating. Artificial insemination is a good option there as well (e.g. champion dogs.)

A breeder may have an excellent older dog, and then come into the possession of a female puppy that is a potential mate. Artificial insemination is a way to preserve the excellent bloodline. The semen of the older dog can be extracted, and stored for use when the puppy has matured enough to breed. In those two years, the older dog may become too infirm to mate naturally, and may have even died. Artificial insemination gives the breeder more options to achieve his breeding goals thanks to freezing the semen of the absolute best Sire.

Artificial insemination, also, may become the method of first choice if distance between the breeding dogs is prohibitive. Long distance travel is difficult, potentially damaging to dogs, and is costly. Artificial insemination bridges this distance. Dogs in New England, USA can now breed with dogs in England, UK without leaving home thanks to artificial insemination techniques. Potential mates can bridge the distance of time. Dead dogs can leave a legacy of semen for the new offspring through artificial insemination. A desire to increase the gene pool and prevent some of the genetic time bombs in some inbred dogs has led to breeders searching for bloodlines from times past or distances far beyond.

In addition, artificial insemination makes it possible to give a close medical examination of the semen prior to insemination. This kind of medical examination not only can tell the vitality of the sperm, but also can detect latent sexually transmitted diseases. The knowledge of how vital the sperm are can be used to either discard this dog as a suitable mate or to take steps that can improve the chances of successful implantation. A male’s semen can be manipulated to concentrate the most vital sperm in it. Additional inseminations, also, may be done to improve pregnancy success. Sperm identified with sexually transmitted diseases won’t be implanted to avoid causing disease(s) in the bitch.