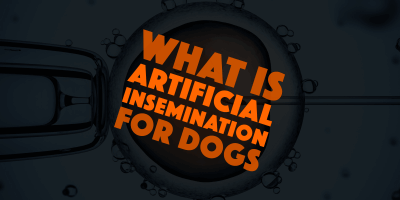 Breeding has never been safer or easier thanks to the advantages of artificial insemination. Still, it is a practice shrouded in mystery for many dog breeders. Here are some important facts that will help you decide if AI is right for you and your dogs.

There are so many technological and scientific advances in the world of animal husbandry, and large and small animal breeders are usually the first to take advantage of the great opportunities present. However, the artificial insemination breeding method tends to lag in canine reproductive circles, and usually because it scares people until they learn more about it. In reality, there isn’t anything scary about artificial insemination. In fact, it can eliminate many of the scary issues that can accompany traditional “physical” breeding, and make things a lot simpler for both stud and bitch owners.

What Is Artificial Insemination?

Artificial Insemination, commonly referred to as AI, simply put it is the act of inseminating bitches through artificial introduction of semen into the vagina. Using a simple plastic tube, semen is placed directly into the cervix, for immediate delivery, thereby improving conception rates greatly. This is one, but only one, of the many benefits of AI (the ability to increase conception rates as much as 25% over traditional breeding). Not only will you have more successful breedings a year, but you’ll be pleased to learn AI can also increase litter size, giving you the opportunity to produce more puppies per litter!

[pullquote-right]Think about it… if you had more successful breedings a year, what would that do for your program? What could you do if you produced 1 more puppy a litter? How about 2?[/pullquote-right]

For some dog breeders, the vastly increased conception rate using AI might be enough to convince them there is something to look into. For others, however, there is still worry that the procedure is invasive and too unnatural. In reality, artificial insemination increases the safety and health of breeding stock on both sides of the breeding. It also allows breeders unprecedented ability to access a worldwide gene pool in an affordable and easy way, as semen samples can be chilled and shipped a great distance overnight via special chilled AI Kits for Dogs. What was once only available to the richest breeders is now open to everyone thanks to Http://AIKitsForDogs.com and their artificial insemination resources and supplies.

When a breeder takes a bitch to another kennel or home to breed to an outside stud, they expose her to anything that might be in that new environment. The stud dog can also be just as at risk if the visiting bitch is carrying a transmittable disease as well.

The three most common STDs in dogs are CTVT, Brucellosis, and CHV. CHV puts unborn puppies at great risk, CTVT is a form of cancer that is sexually transmittable and Brucellosis is a bacterial infection that can cause miscarriages and/or sterility. There are MANY unfortunate stories of prize producing dogs having to be taken out of breeding programs because they got STDs from incidences such as these, making them useless to their programs. Artificial insemination eliminates the risk of any of the three destructive illnesses.

Dogs and bitches can both carry viruses, kennel grounds can harbor serious diseases that may not affect healthy dogs, but can cause spontaneous abortions in bitches, or abnormalities in puppies.

These illnesses can be devastating, sometimes just irritating. It may not even be the fault of one or the other animal owners, sometimes the problems aren’t immediately apparent and an unsuspecting dog owner can walk right into a dangerous environment unwittingly. When breeders use AI, they can get the best of both gene pools without ever exposing their dog or bitch to diseases.

Whether you own both the bitch and the stud to be used in the pairing or you plan on using an outside stud, the traditional breeding method has some inherent dangers. Animals may struggle, severely injuring the stud during the tie. Bitches can bite when feeling agitated, as dogs may be overzealous in their efforts, hurting the bitch and causing excessive stress. Some of these common issues are a result of a dogs’ character and how it reacts to stressful/exciting situations, others are just due to inexperience. Artificial insemination takes all of the elements of animal personalities and desires out of the picture and provides a safe, calm way to breed your dogs. With AI there is no physical interaction between stud and bitch, eliminating any chances of behavioral mishaps.

One of the most attractive aspects of artificial insemination is the way it opens up the global gene pool. Even those areas formerly closed off and subject to a depleted gene pool can now reach out and strengthen their bloodlines with animals they haven’t been able to access due to financial or logistic issues in the past. Even breeding dogs on opposite ends of the country is lightening quick, far more affordable, and easier than ever before with select Chilled AI Shipper Kits. These shipper kits allow you to extend the life of the collected semen via a special additive that helps protect the cells during transport and ship it overnight anywhere in an insulated cooler. This gives you the chance to grow your kennels’ reach exponentially as now you can advertise your stud internationally!

AI Keeps Your Dogs in Action

Stud dog owners soon learn to love the flexibility that artificial insemination provides. They can keep their competitive dogs out on the road for shows or performance circuits, and still make them available for stud without having to make them physically available. Keep everything on schedule while staying in business.

How Difficult is AI?

Here is the real roadblock in many breeder’s minds. Once they find out the benefits and stats of using the AI method, many breeders still fail to take the next step and actually learn how to AI because they automatically think it will be difficult, technical, or require too many tools.

The process is broken into two parts, one for the stud owner, and one for the bitch owner.

It is entirely possible to do everything from your own home as long as your dogs are in good health and you have already done the common breeding tests that you would do in any type of breeding. For first-timers, expect it to take 20-30 minutes for both collecting and inseminating a bitch when both dogs are on-premises. For the best results, you should inseminate your bitch 4 times per heat cycle, waiting 24 hours in between inseminations.

For dogs in different locations, semen can be collected and shipped the next day air to be used the very next day in just a few minutes by the bitch owner.

We’ve published an article if you believe your bitch isn’t having regular or normal heat cycles. That way, you can get her back on a regular schedule and use artificial insemination when suitable.

The last reason why some dog breeders are hesitant to try AI is they falsely believe it will be too expensive or require trips to a vet. While we recommend a good relationship with your local vet, one should not be necessary for fresh collection or insemination of your dog (Unless your litter will be registered with the AKC registry. The AKC requires a vet to perform the procedure for verification purposes). Artificial insemination can also be much cheaper than traditional breeding. You get all the benefits of AI, reduce your risk of illness/injury, and reduce your time invested not having to interrupt your schedule.

Where To Get Your Artificial Insemination Kits for Dogs

Using AI Kits for Dogs makes it even easier. Their kits have all of the sterile collection and insemination supplies for everything you need to do. Everything from pipettes, gloves, to semen vials, is right at your fingertips. Packaged according to your specific needs, and ready for instant use. Step-by-step instructions are included with every kit ordered to ensure you are successful, even if it’s your first time! There are even chilled semen kits with insulated shipping carriers for safe delivery of semen samples to kennels where on-site insemination isn’t possible.

Daniel Featherston owns Elite Bullies in Salt Lake City. He is internationally known for his high-quality breeding program, positive training techniques, and is a strong proponent of AI to help breeders get the best genetics available from anywhere it exists. Happy to see the ripple effects of his actions, Daniel has created AIKitsforDogs.com to help breeders whether they breed one bitch per year or a hundred, own one stud dog or are standing a dozen, have all the tools you need on hand, easily accessible and properly created for canine AI.