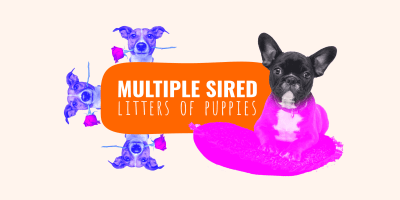 Have you ever seen a litter of pups, where some are white, some spotted and some black? And you wondered how that happened? It is probably because of a multiple sired pregnancy. These happen when two or more dogs have mated one female dog. Such breeding results in different looking pups fathered by a different stud each.

However, a lot of breeders are making this marvel of dog genetics, work to their advantage, by inducing multiple sired litters.

What Is a Multiple-Sired Litter?

A multi-sired litter is a group of puppies that are born from the same mother, in a single ovulation but have more than one father.

Puppies of the same multiple sired litter can look totally different from each other and when put through a DNA test, can show completely varying genetic lines. It is a fascinating miracle that only dogs are blessed with. The female can birth a litter of 6-8 puppies in one go, all belonging to different genetic lines.

What Is a Dual Sired Litter?

Dual sired litters or stud doubles are a form of multiple sired litters in which breeders mate the female with only two purebred studs.

Dual stud litters are also very commonly accidental. Indeed, breeders often want to arrange one mating with their female and a known dog. Yet, another dog can knock at her door a few days later.

Advantages of Breeding a Female with Multiple Sires

A lot of professional breeders are adopting the technique of mating their female in heat, with more than one dog for one of the following reasons:

Having said that, you cannot deny that a litter with multiple fathers is often accidental. You cannot keep a watch on your dogs at all times. Plus, the signs of pregnancy in dogs are very subtle and they only begin to show once it is too late.

How Can a Litter of Puppies Have Multiple Sires?

A female dog in heat produces many eggs at a time during ovulation. This makes her so fertile that she can conceive during every breeding. When the female in heat ovulates, these eggs aren’t even fully mature. So the sperm from different copulations simply clings onto her uterine lining, waiting for eggs to mature.

The eggs of animals mature in the uterine horns, an organ that is very prominent in most mammals. When these eggs are accessible to be fertilized, the sperm that has been sticking to the uterine lining impregnates them.

Thus, if the sperm from multiple dogs is present, multiple puppies are sired in the same heat cycle.

The puppies born out of this process are genetically proven to be from different fathers. Their appearance also differs from one another and so do their habits.

This particular genetic marvel is what makes canines and felines stand out in the animal kingdom. The ability to sire different puppies from a single ovulation sets our pets apart.

How Do I Know That My Litter of Puppies Has Different Sires?

Mainly their appearance is what gives them away. You may find color and shade variants within a single litter.

Sometimes, it also happens that the female may have mated with another dog, while her present eggs are getting fertilized. The puppies born through this last mating may be younger and weaker than the rest – this also is a sign that the litter is multiple sired. For example, runts of a litter may be from more recent breedings.

Another distinguishing factor in a genetically diverse litter is also the behavioral traits and habits displayed by the different pups. But if you’re very curious or are a breeder and need to know the exact details, you can buy a Breed Identification Kit online or even get your dog’s DNA tested.

Can a Single Puppy Have Different Fathers?

No, they cannot. A single puppy will constitute of one father and one mother only. A full litter of 6-8 puppies can have different fathers, but each puppy will only be the offspring of one male and one female.

Miracles happen, but they can only stretch as far as medical science takes them.

The simple science behind this is that in order for a puppy to be born, the mother will ovulate. During ovulation, she will release many eggs. She will mate with a male dog that will release his semen into her. The semen will contain many sperms. A single sperm fertilizes an egg and when the sperm meets the egg, a fetus begins to form. There is no room for more sperms to meet the egg anymore.

How Do You Register a Multiple-Sired Litter?

The registration of multiple-sire litters is possible with the American Kennel Club but it follows a different process than more regular litters. The process depends on whether this special breeding is intentional or accidental.

If the multiple-sired litter was induced under supervision to breed a genetically diverse offspring, the rules to register the litter are as follows:

If your female dog’s litter is accidentally multiple sired, which is very common, the rules change. In the case of a surprise stud double or multi-sired puppies being born, one must:

If the DNA test confirms that the litter was sired by a single dog, then regular charges to register will apply which are $25 base charge and $2 per puppy.

However, if the puppies are found sired by multiple dogs an additional fee of $200 is charged. Thereafter, for each sire, a base fee of $25 is charged and for every pup born from that sire, a regular fee of $2 is charged.

Earlier, the AKC disallowed the registration of litters that were sired by more than one father. However, starting 1998, this has changed.