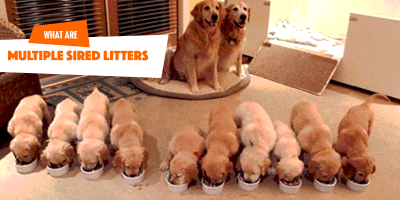 Can dogs have more than one father? Our visitors, and not just those involved in dog breeding, often send us an email asking a specific question they need an answer to; and this one is definitely in the top three. Unlike humans, dogs are designed to give birth to several whelps which can raise the question of these littermates potentially having multiple fathers.

Perhaps it sounds curious but can dogs from the same litter share the same mother but have different fathers? Even weirder, can one puppy be fathered by multiple sires? Let’s answers these questions precisely but let’s first explain how a female dog becomes pregnant.

How Does a Female Dog Become Pregnant?

During her ovulation, the female dog will release multiple eggs. These eggs will become mature each on their own time during the estrus stage of her cycle. Once her hormonal levels change during her heat, male dogs will become attracted and try to mount her.

Once a male dog ejaculates in the female dog’s uterus, the sperm cells will race to find these eggs and fertilize them. Male dog sperm cells usually reach the eggs in the female’s oviducts within 30 to 60 seconds after ejaculation. Canine sperm cells have a viable lifespan of around 5 to 7 days — meaning fertilization can happen several days after penetration!

Let’s summarize the timeline of events happening between our canine dam and sire:

So, can a puppy or a litter be multi-sired? Yes and no.

Can One Puppy Have Multiple Fathers?

No, one single puppy cannot have multiple fathers. One puppy has only two parents: one mother and one father; never more. Let me explain…

A puppy starts as an egg released by the female’s uterus during her heat cycle; one sperm cell coming from one male dog enters this egg and this puppy’s story starts right there and then. The resulting fertilized egg is called a zygote, which will then start the cell division growth to become an embryo. We’ve got an illustrated article explaining the canine whelping timeline, from the coitus, fertilization to the birth of the puppies.

As you can see, one egg only accepts one sperm cell, so one puppy can only have one single father. But on the scale of a given litter, it’s another story!

Can a Litter of Puppies Have Multiple Fathers?

Yes, a litter of puppies can have multiple fathers. Because each puppy comes from the encounter of a father’s sperm cell and one of the mother’s eggs, if the female is penetrated by several males and she holds their semen inside her uterus, she may have her eggs sired by different males. Each egg, regardless of its father, will develop with half the mother’s genetic material and half of their respective sire’s genes.

From an evolutionary perspective, this makes sense. Indeed, a female wants to have the strongest litter possible so the breed can thrive. In other words, receive semen from several candidates and letting the best ones win can only be a good thing.

For decades, the American Kennel Club was not allowing the registration of the puppies coming from multi sired litters. Since September 1, 1998, Multiple Sired Litters (MSL) are able to become AKC registered but the path to registration is a lot more complicated than for regularly single-fathered litters.

Indeed, you will need to DNA profile all the parents and all the puppies, a parentage evaluation will be performed and if successful, the regular registration process starts. Obviously, all these steps incur additional costs.

Why Would I Want a Multi Sire Litter?

In simple terms, ovulation in dogs is initiated by the hormone estrogen. Estrogen gets the female dog’s reproductive tract ready for breeding. However, this part of the process varies greatly from dog to dog and could be as quick as one day or as long as three weeks. After the estrogen portion of the fertility cycle has finished then a surge of luteinizing hormone (LH) is released (which is typically called Day Zero). This is the trigger for the release of ova (eggs). Bitches ovulate 48 hours after the LH surge (that is on Day 2). The optimal fertility period is from Day 4 to Day 6. The LH surge can be documented by measuring the hormone levels.

There are two related phenomena that relate to multi sired litters. The first is superfetation, which occurs when an already pregnant animal is bred and a second conception takes place. This has never been documented to occur in dogs and is exceptionally unlikely to occur because dogs ovulate all of their eggs over a single 24 hour period. If additional spermatozoa were to be introduced because of another breeding event, they would not be able to reach the uterine tube past the placentas that had developed.

However, the phenomenon which does occur in dogs is called superfecundation. This is when one litter of pups has multiple fathers. This could occur in any bitch that is bred with more than one male. Indeed, superfecundation can be encouraged because it will result in additional genetic diversity in a single litter. Indeed, the AKC has recognized this and has developed the Multiple-Sired Litter (MSL) Registration process. For the MSL process to take place the AKC requires that all potential sires have a DNA profile in place and all puppies in the litter must be tested for parentage. If it turns out that the second sire is not the same breed as the bitch then testing is absolutely essential to determine which of the puppies are purebred.

There are a number of reasons to attempt MSL including low sperm count, poor quality semen and a desire to maximize genetic diversity in a bitch during her prime breeding years (which may be very limited in larger breeds).

For all mammal species, including humans, felines and canines: a female who releases more than one egg and breeds with more than one male, while her eggs are still mature, may host progenies with different fathers in her uterus. In dog breeding, this usually happens by accident but some dog breeders actually seek these multi sired litters to bring more genetic diversity to their bloodline.

Please note that the knowledge shared on this page applies to all healthy mammals, including cats and humans. Some females dogs may go through some abnormal heats which would obviously change their entire experience. Furthermore, in our own human species, the female commonly releases only one egg resulting in a single baby.