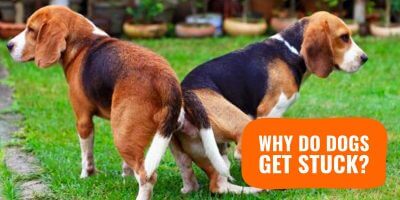 “Why do dogs get stuck while mating” is one of the most valid questions for anybody planning to be a dog breeder. Intercourse between a male and a female dog for the purpose of impregnating the latter often turns into a rather scary scene when the two appear to get stuck to each other.

Mating and breeding are crucial and important activities in every dog’s life. Yet, most people, even breeders, and experienced dog owners are surprised by the way dogs mate.

In fact, it is quite disturbing to behold for an anxious breeder because there is no defined time until when the dogs would remain in that awkward position.

This getting stuck, however, is not as threatening as it might look because both the dogs turn their rear end on each other and it is difficult to conclude whether they are in pain or just being uncomfortable. Well, no matter how weird the process is, getting stuck or what is technically referred to as a copulatory tie is an essentially common and natural thing to happen. It is not something to be really worried or anxious about as it is just a stage in the breeding process.

Let’s understand the phenomenon in details more so that first-time breeders and dog owners stay more relaxed in their approach to the furry ones.

Why Do Dogs Get Stuck During Mating?

Dogs get stuck during mating because of a process called a copulatory tie. It is also one of the main stages in the process of intercourse.

The male dog has an organ called the bulbus glandis, which is responsible for keeping him tied up with the female. The dog breeding tie basically keeps the semen secured inside the female dog. The bulbus glandis expands and gets locked in the uterus, and the female dog gets higher chances of getting puppies.

The tie is extremely common but as opposed to common misconceptions, not a strict requirement for pregnancy as such.

How Long Do Dogs Get Stuck For When Breeding?

The approximate time for which the dogs can be stuck from butt to butt varies between 5 minutes to 15 minutes. However, depending on several factors, the copulatory tie can take as long as half an hour.

Browsing forums will show you how varying such timing can be.

Both the breed as well as the individual dog has a large role to play in this. The calmer the dog stays, the faster they get over it. On the other hand, when the dogs get panicked, the induced anxiety makes the locking position last longer.

One thing that breeders must ensure is that the dogs should never ever be interrupted when they are in the mating position. Even if they are stuck for a fairly long time, making it rather agonizing to watch them over, interruption by any possible means is strictly prohibited.

Ideally and in most cases, the copulatory tie won’t last for more than 20 minutes. It mainly depends on how long the male dog will take to ejaculate his sperm into the female dog. They will stay stuck till the bulbus glandis is back to its original size.

Stages of a Tie

Mating in canines takes place through the following stages, which breeders should be aware of to avoid confusion or unnecessary anxiety.

Getting stuck often happens right at or after ejaculation. The expansion of the bulbus glandis compels the dogs to get stuck to each other from the rear ends. The situation lasts for 10-15 minutes in the majority of the cases. It is also when the sperms are deposited in the female dog. There should be no interruption whatsoever during a tie and throughout the entire intercourse.

After the tie, the dogs release from each other. The male dog’s penis gets smaller and he comes out all on his own.

The first stage is referred to as Mounting. This is triggered by the female dog’s flirting and especially, flagging, which involves showcasing her rear end to imply that she is ready. The stud or the male dog, after getting this signal, prepares to mount the female one.

The next stage is locating, identifying, and penetrating the vulva of the female dog. This might require some assistance and help from the breeder especially if the male dog is about to mate for the first time.

Once the vulva is located, it is ejaculation that takes place. The male dog releases the prostatic fluid along with his own sperm just as he starts humping the female dog.

A copulatory tie can be a bit painful depending on several factors. For instance, if the dog is breeding for the first time, there are high chances of the process being painful for him. This is also because the dog’s lack of breeding experience leaves them confused about which position would suit each other the best. Stress-related discomfort can also result in some kind of pain for both.

There is also something called slip mating that breeders need to be aware of.

Slip mating is when the coitus does not happen because of the male dog withdrawing his penis even before the bulbus glandis enlarges. This is caused when the female counterpart is not completely ready for intercourse and starts moving just as the penetration takes place.

It is good to remember in this respect that slip mating can also impregnate a female dog if the male one has been successful in releasing the semen into the female prior to the withdrawal. In fact, the first ejaculation has the maximum amount of semen and sperm in it.

Lastly, if the male dog’s penis continues to be enlarged after he has pulled out from the female; make sure catching the seminal fluid in a container and keeping the surroundings clean.

To avoid wrong coitus (or multiple breedings) from taking place and ensure that the mating goes smooth and successful, comfort the dogs as much as possible. Allowing both dogs to meet before breeding is an essential way of preventing chances of discomfort during the breeding, as we explained in another blog post.