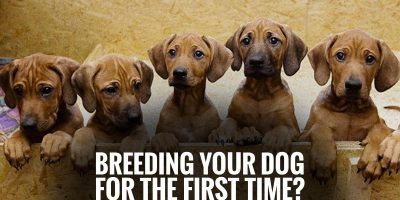 Breeding your dog for the first time can be a daunting task especially if you have nobody experienced mentoring you. There are so many interrogations new dog breeders have in their mind about dog breeding so we’ll try to answer them right here.

Each dog breed has its own timeline when it comes to pregnancy and cycles; this is why it is almost impossible to give precise answers using numbered years, for example. Small breeds tend to come into heat more often while giant breeds divide this number by three or four. The same goes for life expectancy, while some breeds have it set around 8 years, many others double it.

Some answers are purposefully short but accompanied with a link for further reading. We focused on providing first-time dog breeding information.

How old does a dog have to be to breed?

This is a difficult question because doing it too soon is most likely going to stress the bitch and knowing when too early is can be tricky. As a rule of thumb, a responsible breeder will wait for his bitch to be at least 18 months of age in order to start breeding her.

Never breed her on her very first or second heat since she isn’t yet fully fertile.

How old is too old to breed your dog?

The age limit for breeding a dog depends on the sex of that dog.

A female’s fertility will decline sharply from 5 years old as her body becomes a little less able to cope with a whole pregnancy and the nursing of the delivered litter. Female dogs, unlike women, do not go through menopause, therefore, they never really cease their cycles. Instead, the regularity of their estrus cycle (heats) changes and instead of being four times a year, it goes down to once or twice a year. The female is technically still fertile but a lot less than when she was in her prime time. Getting her pregnant will turn out to be very difficult and even if you do, risks of stillborn puppies increase while the puppy count sharply declines.

The age of a male is less relevant as they are able to reproduce until much later in life; however, they face the same issue than their female counterparts. The older they get, the weaker their sperm becomes and once they enter the senior stage, they tend to fail most ties.

What does prime time mean in dog breeding?

The prime time when discussing dog breeding is the few years starting from 18 months of age until her puppy count sharply declines, usually around her 5th or 6th year of age.

This is the best time to breed a female since her fertility is at an all-time high thanks to high progesterone levels. Her body is also able to cope with the tiring pregnancy and draining delivery of the puppies followed by their nursing. A first-time pregnant dog will inevitably struggle a little bit but she will get better at it over time.

What day of the heat cycle should my bitch be bred on?

Roughly 11 to 13 days after the bleeding has started, the female should be ready for mating. Usually, you can notice the bleeding has thinned down to a more pinkish color but this is not always the case.

The best way to figure this out is to put both dogs together and see whether your Dam is in the first or second stage of her estrus cycle:

The second stage is when you should be able to see the female flagging her tail and the male trying to mount her. Let them do it.

Otherwise, you can visit your vet on her first day of heat and he will be able to set up a schedule for progesterone blood tests on days 9 to 11 in order to tell you when the best moment for mating is. This is the best option if you are using artificial insemination.

What is a tie in dog breeding?

When you put your two dogs together they will eventually mate if the female is ready and receptive. The breeding or mating process can be lengthy and follows several steps, one of which is the tie. It’s also the one people expect the least and are the most scared of.

Both hind ends touch each other and this position is often very uncomfortable for both partners. The tie will stop only once the male’s penis becomes unswollen.

The part worrying most new breeders is that the breeding tie can last for several dozens of minutes, during which the bitch may want to run away. This would be disastrous as the dam would end up dragging the male and it would cause serious damage to either one of them.

This rarely happens as Nature did things well but be aware that it might occur and you should definitely be around in order to calm your bitch if she seems to get anxious. Do not intervene if everything is going according to plan; just approach them if there is a high risk of injury.

You can learn how the coitus between two dogs develops on our dog breeding timeline.

How long is the pregnancy of a dog?

The gestation period in dogs lasts between 58 and 68 days, with an average of 63 days or roughly two months. The breed, size, and type of your female dog does not matter; your bitch should still give birth to her litter of puppies in the aforementioned timeframe.

Obviously, a vet should monitor your female’s gestation just to know how many puppies she is carrying and to make sure she is perfectly coping with her pregnancy. Closer to the delivery day, your bitch will suddenly drop her rectal temperature which will be a sign of imminent labor.

How many puppies could my dog have?

The puppy litter size is mainly defined by the size of the dog:

As you can see, each breed has an average puppy count given as a range because other factors will determine which end of this spectrum she will lean towards.

We’ve written a comprehensive article discussing what influences a puppy litter size but in short, here are the top factors coming to play besides the dog’s size:

The puppy count of a given litter is difficult to predict and almost impossible to influence. Science has not yet found the tools in order to allow breeders to decide how many puppies should land on the next litter; and it’s a good thing.

Do I need a whelping kit?

Puppy Express Whelping Kit for up to 8 for Puppies Dogs
$34.99
Buy on Amazon

As soon as your vet confirmed your bitch’s pregnancy, you must prepare a comprehensive dog whelping kit. This sort of toolbox will allow you to assist and help your bitch towards the end of her pregnancy, during labor, delivery and while she’s nursing her whelps.

There are some ready-to-use whelping kits available on Amazon and they are usually enough for most people. Some experienced breeders prefer to assemble their own whelping kit, which usually includes round-tipped scissors, dental floss, forceps, a thermometer, ribbons and a lot more. We’ve got a full list available on our DIY whelping kit article.

Along with a whelping kit, a breeder must prepare a confined, quiet, warm space for the bitch to rest and nurse her puppies. This is called a whelping box and we’ve also written a comprehensive article on it.