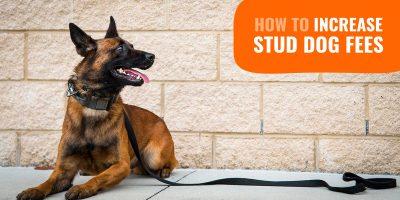 Stud dog fees refer to the amount that a popular proven male dog is paid for each stud service. Indeed, stud dog owners generally get paid each time one of their studs mates with a female dog.

On average, stud dog fees come to an amount of $250 to $1000 for each time that he mates with the female dog. Sometimes, breeders and stud owners waive the monetary fees in exchange for a profit percentage from the sale of puppies or by keeping the best of the litter for themselves.

Such stud services are done so that the stud’s ideal genetic lineage can produce a top of the line litter, and bloodline. The owners of a female dog, who get to keep the litter and sell it at a profit, pay these fees to the owners of the stud for services rendered.

In this article, you will read about the little tips and tricks that will enable you to increase stud dog fees to drive higher profits.

In order to be a successful dog breeder, networking is more important than you think; even more so when you own a prize stud. All events, big or small, can in some way lead you to more business. So make sure that you don’t miss out on any dog shows, local kennel club meets and the more recently trending dog parties and fairs too.

Apart from networking with your peers and contemporaries, you will also be exposed to opportunities to connect with some good local, national, or international brands, pertaining to dog grooming, feeding, and health. This is excellent for business, as it adds to your credibility as a breeder. Plus, collaborating with bigger brands also puts your stud out there, making him a prize catch for female dog breeders.

Win dog shows, or at least participate in many. Light the stage on fire with your star stud and let the females know that he’s available! Without a doubt, winning dog shows will increase your stud service fees. Stud dog fees shoot up because most breeders want to have some champion blood in their lineage. When you own a female, you want awarded proven studs to show clients you are serious about the future.

Moreover, your stud can become very popular just by participating in dog shows without actually winning any of them. He will still be a catch for most dam owners. It all eventually boils down to business. The litter born out of mating with a popular stud would probably sell itself. It is excellent from a marketing point of view, for the female dam owner and for those who buy the litter.

Promote Your Stud on Social Media

Turning your stud into a social media sensation can rocket your chances of increasing his stud fees. Understand social media and promote your dog in the right way. Each social platform has its own code of conduct. Most certainly, social proof affects your kennel name‘s credibility and reputation. Therefore, your kennel can immediately increase its stud fees successfully.

Getting good followership for your stud’s social media profile will also make it obvious that your stud is worth it. People love what other people love. Instant public gratification and full points in credibility assure that your stud’s litter will go for a higher price. Basically, a popular stud is beneficial to you the stud owner, but to the female breeder too.

Moreover, you might also get requests for brand collaborations, depending on your stud’s popularity. This results in a direct inflow of money. While a popular dog will fetch more money in stud service fees, it can also help diversify your income streams.

Proof in the Pudding

The best way of marketing your stud’s awesome genetics is to back them up with evidence! If you’ve been in the business for a few years, chances are that your stud’s offspring are already shining in the market. Make sure you always stay in touch with past customers.

You are hopefully keeping a track of the pups that you have sold before. Find out what they are up to now and document their successes. Have some of your past puppies won competitions or dog shows? Been employed as skilled working dogs? Or, have you turned into the most lovable family pets? If so, then right there, you have your stud’s real-life quality certificate. And obviously, the more, the better.

If you are selling to experienced breeders and therefore asking higher stud fees, you inevitably need proof. So get them before people ask.

Customer reviews are everything, even for a kennel. Even for the tiniest spend, we look at reviews first. So reach out to past customers. List all owners of female dogs that you have formerly mated your stud with. And ask them, one by one, to write you positive testimonials. Showcase testimonials on your website or your social media platforms. If you own a kennel, then some of these could also go up on the pamphlets or flyers, if you have any.

Get your past clientele to mention:

Get them to throw in some good words for your sire, about how well behaved he had been and how the litter turned out. To ensure that you get the answers you need, you can even create a questionnaire with the precise information that you want to put out.

Sometimes, you simply need to cut through the trumpery. Just tell prospect breeders why your stud is the right choice, and why you increase stud fees. Every female dog breeder is aware of the features that a good stud brings to the table. It could be incredibly famous lineage, award-winning abilities, rare and sought-after attributes, special skills or behavioral traits.

Find out your dog’s USP and make it the foundation of your stud service price hike:

Recognize your unique selling proposition and build on it. In fact, improve this proposition over time by breeding complementary dogs. This will be particularly helpful when a female dog owner is looking for specific qualities to match that of his dam.

You can hike your dog’s fees by offering a guarantee of the female getting pregnant after the mating. It is a unique proposition that not many stud breeders offer today. Display your strong work ethics. Promise a refund if the pregnancy isn’t confirmed. Or, guarantee multiple mating sessions in the same stud fees, in case the female fails to conceive.

Such guarantees will put you in the good books for breeders and encourage more people to work with you. Breeders might not mind paying higher fees to someone who offers a guaranteed litter and also promises refunds in case of a no-show. This is a must-do for beginners and studs mating for their first few times.

Make sure any terms and conditions are properly written and agreed to by all parties. This stud service contract should include any guarantees, amounts and other relevant information. In case of disagreement, it is a legally binding document.

A common practice amongst breeders is to hike prices by way of revenue sharing. If you believe that your dog is that good, simply waive off the fees in exchange for a percentage share of the revenue generated through the sale of the puppies. If your stud is exceptional, you can go as far as asking for half the revenue, or profits.

Be thorough with your calculations, so that in the end you get an indirect price hike. Most importantly, don’t forget to have complete faith in your stud – that kind of confidence always works!