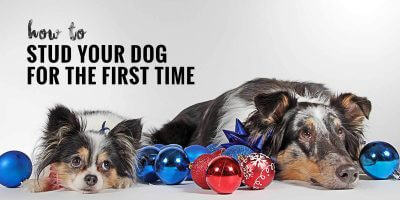 If you’re a dog breeder you will inevitably need to know how to stud your dog for the first time at some point in your dog breeding adventure. We all dream of owning a champion sire but it all starts with a very first copulatory tie.

You should stud your dog for the first time when your male dog has fully sexually matured, has a clean health sheet, and is provided with a suitable, experienced brood bitch that exhibits the desirable features of your breeding program. Ideally, the stud dog will be kept at home during the breeding process to avoid any external stress variables and to ensure optimum comfort.

The process of choosing a sire to serve as your breeding base and breeding him with an ideal dam is referred to as a stud service. Breeders, in general, will have their own reasons for providing their dog as a stud in these types of breeding services, however, the main reason, which happens to be the most important, is to improve that particular breed and to greatly benefit the gene pool. By this time, you should already have an established record and registry of your stud dog as well as have him officially registered in a Kennel Club.

First of all, when running a stud service operation, you must be able to show proper identification and documentation of both your stud dog as well as the dam. A stud dog contract should be made before mating with details about the amount of any stud fee or compensation. The agreement should be mutual by both parties involved, the owner of the sire and the owner of the dam, and they should be signed by both.

How to Stud an Inexperienced Dog

To be qualified as a stud in a typical stud service, your dog must pass all the necessary requirements. He should be free of diseases such as syringomyelia, mitral valve disease, or any other various eye conditions, for example. Additionally, he must not have a history of any other ailments and health issues that would prove to be detrimental to its offspring. He should be free from any defects as well.

A qualified stud dog must prove himself to be physically fit, appealing, and contain proof from various means through dog shows. Ideally, he has gone through the proverbial hoops of a show dog with dog trials, agility training, and show rings. With that said, your dog should have already reached a mature age that makes him adequately equipped to breed for success.

When you stud your dog for the first time it is important to keep in mind certain tips that that even the most experienced breeders will advise. You want to ensure success in your breeding program so be sure you have a set of guidelines to go by, as well as common mistakes that dog breeders tend to make and how to avoid them. Read our bestselling handbook to find all of it in one handy place!

Contrary to what some breeders may believe, your constant interference in the dog’s affairs can actually hinder the process and disrupt the natural flow of things. Due to this, it is recommended you let nature take its course and let the dogs interact naturally according to their timing without forcing the outcome.

Likewise, you want to make sure you don’t hang around too long as this, too, will cause a disruption in the breeding process. As much as it is tempting to want to meddle in your dog’s affairs and be around to watch things happen, give him some space.

Finally, by now you should have a suitable mate (dam) for your stud that fits your ideal breeding program and has all the traits and characteristics that are desirable for your purpose. Similar to any other relationship between two subjects, both male and female dog should have developed a comfortable rapport with each other before the actual mating is planned to take place. This is to ensure optimum comfort and a natural progression of events. Keep in mind, the dam chosen for mating must also be Kennel Club registered.

Where to stud your dog for the first time

When breeding a male dog, several factors need to be considered in order to ensure quality in your breeding program. If this is your first time, you will have to keep in mind that the place in which you plan to stud your dog and breed him with a female can make or break your long-term plan.

Inexperienced dogs need to be bred in a familiar environment where they feel at home. This will promote the natural succession of events according to their natural timing. This will also prevent any of the dogs experiencing anxiety during the process. In general, a new, unfamiliar place will provoke stress in the dogs because it will cause them to feel lost and they will, in turn, feel on guard.

When to stud a dog for the first time

Not only is the place where you stud your dog for the first time crucial to breeding success but so is the timing — so what is the best age to stud your dog? Timing really is everything in this case. To determine the best time to mate the dogs based on their fertility is dependent on several factors including the dog’s age, sex, health, and size. Generally, smaller breeds sexually mature earlier than larger breeds.

Wait for the prime time to begin the act of mating both dogs. This time refers to the best time a female dog should breed due to her high fertility rate and progesterone levels. She should be 2 years old at the least, have already had two heat cycles before mating and be bred 11 to 13 days after the start of bleeding in her heat cycle.

Stud dogs, on the other hand, tend to be more sexually capable earlier than their female counterparts and can mate for each day of their lifetime. Yet, sires also should not mate before two years of age. Both the vitality (motility) and viability (spermatozoid count) of the sperm is what determines his most fertile time. For both male and female dogs, the older the dog is, the less sexually potent they become so aging does play a major part in diminishing fertility, as well as bad health.