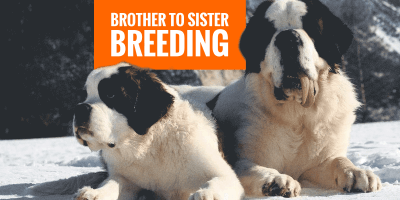 On most occasions, it is generally considered dangerous to breed brother and sister dogs together because of the risk of long term health complications. Even if inbreeding is carefully planned and managed, it still has the potential to cause other indirect problems over time.

However, a certain degree of inbreeding is still required if dog breeds themselves are to continue to exist — otherwise Labradors will no longer look like Labradors, and so on. Nevertheless, it is recommended that dogs to be bred do not share the same the same parents or ancestors in a four-generation pedigree. This ensures the genetic material shared between a litter and its parents is similar but not too similar that it will significantly reduce the gene pool over time.

Benefits of Mating a Brother to its Sister Dog

Most people associate inbreeding with incest in humans which is both illegal and medically wrong. However, completely different standards apply in the canine species. Inbreeding in canines is often seen as beneficial and is still perfectly legal. Dogs lack emotional maturity, so a male dog will still naturally attempt to mate with his sister, without giving any thought to morals or repercussions. The copulatory tie will not require any additional assistance than it would usually. In fact, it might even be easier because the dogs are already known to one another; they should already be comfortable around each other and familiar with one another’s smell.

Brother and sister dogs are most commonly bred together to help produce puppies with predictable traits related to temperament and appearance. The general idea is that — in theory — if you have two dogs with exceptional health and aesthetics and you breed them together, they will produce one or more equally superb specimens.

A brother and sister dog will share far more genetic material than two unrelated or distantly-related canines because they share the same parents. Therefore, breeding a brother and sister dog together can fix or homogenise certain superior traits in dogs by increasing the likelihood that they will be passed onto the next generation. Some believe that this is the most efficient way to strengthen a breed of dog because dogs within this bloodline will share more and more of the same superior genetic material.

This is how an official dog breed comes about in the first place — dogs with very similar traits repeatedly breed until a group of dogs have a certain look about them, then a breed standard is officialized, and the actual dog breed exists. Therefore, Labradors look like Labradors and Pomeranians look like Pomeranians.

This process of breeding a brother and sister dog together can be considered a lot simpler logistically. A dam owner can spend months seeking out a stud that complements their dam. They will then have to pay fees and sign a stud service contract to have access to the stud for breeding. If the dam can instead be mated with one of her brothers, the time taken to locate and secure a stud is significantly reduced.

Additionally, canine incest (if done by an experienced breeder) can sometimes provide some peace of mind. You will have more of an idea about what to expect from a litter. However, siblings or not, both dogs should still undergo genetic screening, so you can learn about all their genetic material, both good and bad. It is important not to become complacent or irresponsible or you may end up exacerbating any negative traits in future pup(s).

Risks of Breeding Siblings in Dogs

Unfortunately, it is not correct to assume that two dogs who share strong genetics will always produce the perfect litter; free from disease, disability or illness. Two dogs who do not outwardly display certain negative traits or characteristics, may still be a genetic carrier and carry recessive alleles which, when combined at a later breeding, cause negative traits to manifest in their offspring. Consequently, it is not uncommon for inbred dogs to experience problems such as hip dysplasia and heart and liver conditions at some time in their lives. Therefore, you must always carry out a full genetic risk assessment before attempting to breed a brother and sister dog together — even if (on the surface) they seem perfect.

Reducing the Size of the Gene Pool

Breeding sibling dogs together also reduces the size of a breed’s gene pool which is widely viewed as a bad thing from an evolutionary standpoint. Certain breeds become prone to certain diseases (and to death from certain diseases) because their gene pool is so limited that it is difficult for future generations to avoid inheriting genes that predispose them to these diseases.

For example, Great Danes are prone to potentially fatal conditions such as bloat, meaning they have a life expectancy of just 8-10 years, whilst the Dogue de Bordeaux is prone to breathing difficulties and overheating and is therefore expected to live no more than 5-8 years. If the Great Dane and Dogue de Bordeaux are perpetually bred with their siblings, their genetic line will forever experience health problems of this calibre because there are not enough dogs with predominantly good genetic material in the gene pool to improve and reinforce the health of the breed.

Furthermore, if a breed becomes too inbred, it may be subject to inbreeding depression whereby its ability to thrive and continue its genetic line decreases. Too many harmful recessive alleles become present in the population’s gene pool. Thus, in the same way that it becomes more likely that when you breed a brother and sister together they will share the same good genetic material, it also increases their chances of sharing the same bad genetic material. The frequency of this bad genetic material will increase within the population’s gene pool as breeding continues through future generations.

For this reason, animals in the wild have their own highly organised social setups to avoid inbreeding altogether. For example, hyenas will only breed with female hyenas in a pack separate from their own. It is by mechanisms such as these that they avoid inbreeding depression, which could lead to extinction of the species all together — or at the very least, a significantly reduced life expectancy (which has already happened with the Great Dane and Dogue de Bordeaux, for example).

Many breeders who have bred siblings have also found that the puppies have weaker immune systems. They also noted more prevalence of autoimmune disease. They can become seriously ill from common infections and colds than other dogs with greater genetic diversity. Some breeders have also noticed that inbred offspring are more aggressive and less intelligent, making them more difficult to train and control.

Research suggests that the only way out of this trap is to outcross which means breeding dogs together that are not closely related to widen (and improve) the breed’s gene pool. The genes can still be of the same breed but should not share the same parents or share common ancestors within a four-generation pedigree. What makes a species strong and long-lasting is its genetic mix and variety; reducing it leads to no good if done consistently over several generations.

Should I Breed Brother and Sister Dogs?

If you are considering breeding a brother and sister dog together, it is not a decision that should be made lightly. Both dogs must undergo full genetic screening and you should seek advice from a vet about possible implications of breeding these siblings together. There will be rare times when it is smart or required to inbreed and oftentimes when it isn’t. If you are asking yourself the question, then it is probably NOT a good idea to go ahead with such close linebreeding.

The only real benefit to inbreeding siblings is to keep hold of one or more favourable traits and move those down the genetic line. If you are thinking about breeding two siblings together, you should evaluate how important these traits are to the breed and whether these outweigh the potential problems that may also be brought on as a result.

It is useful to consider the Coefficient of Inbreeding (COI) which is the likelihood that two copies of the same gene from a stud and a dam will be inherited by a potential pup. The higher the COI, the higher the risk of inbreeding and the more health complications the dog is likely to have. It is generally recommended within the breeding business that a COI be no higher than 5%. Typically, breeding a brother dog to its sister dog will result in a COI of around 25%, which puts the pup at a dangerous level of risk. Therefore, both the dam and stud should have an exceptionally clean genetic profile before any attempts at mating begin or there is a high chance the pup will inherit any negative genetic material present.

There are also ethical decisions to be made here. As the owner of a brother and sister dog that you are interested in breeding, you should consider how you the owner will feel if your dam gives birth to puppies with congenital birth defects consequential to inbreeding. This can be quite distressing for you, the mother dog and the pup. The mother may reject one or more of her pup(s) if they are sickly or weak and there is a chance they may not survive. You should consider whether the stress placed on all involved is truly worth it. If you still decide to go ahead, never do anything without advice from professionals, as there are lives at stake!