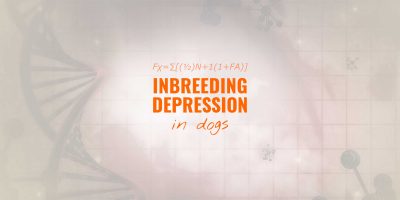 Weakened genetics will lead to a higher probability of poor health in all individuals of this bloodline and breed. Further negatives include a loss of variation. This increases the probability of transferring negative traits such as difficulty breathing due to a small snout or hip dysplasia.

What is inbreeding depression in dogs?

When two closely related individuals mate, the puppies that they produce are a result of inbreeding. When puppies’ parents have closely related genetics, the puppies may suffer from inbreeding depression. This means there is less variation in their genetic makeup, increasing the probability of health issues, negative temperaments, and reduced herd immunity. Any breed and species can develop herd immunity. When genetics have variations, if a new disease comes along, certain members will be able to adapt and survive through them. When inbreeding depression takes place, few to no individuals will have genetic variance, meaning all of the species/breeds are vulnerable.

Inbreeding depression can also affect breeding and fertility in general, both in males and females. Litters produced through inbreeding may have shorter life spans, higher rates of puppy mortality and smaller litter sizes. Furthermore, all produced puppies may have shorter lifespans due to poor physical build, weakened immune system and inherited disease. Thereby, all the produced puppies are already at a huge physical disadvantage in life. Even with preventatives such as DNA testing, problems can still arise. These tests only show up known diseases, many recessive and unknown diseases could still affect the young.

With these negatives, you may be wondering why breeders would even consider these routes? Breeders consider using inbreeding in hopes to pass on a desirable trait seen in the two individuals, such as their temperament or physical statue. For example, a well-pronounced ridge in Ridgebacks. Another example of this. Other motives may be the ease in finding two biological able dogs and thereby increasing the speed of breeding and reducing the costs. This is often why inbreeding is seen commonly in poorer countries. But the process is generally considered irresponsible and poor animal care by most breeders. Hence why the AKC prevents puppies from being registered who have been directly inbred.

What is the coefficient of inbreeding formula?

Without explanation, this formula can be overwhelming and confusing. To simplify it, we are going to individually explain each component and how to complete the formula.

Now that we have explained the meaning of each component, we can take you through step by step of the process.

Check here if you need further clarification or click here for the simple calculator!

What are the consequences of inbreeding depression?

Inbreeding depression consequences grow more severe with increased genetic inbreeding and time. With each generation of inbred individuals, the genetic pool is less varied, thereby leading to less well-adapted dogs. It is important to note that inbreeding affects dogs in three ways: biologically, behaviourally and through their appearance.

When a dog’s biological system because less varied, it is less exposed and weakened to outside diseases. Fewer antibodies and defense systems are passed on and this leads to a weaker immune system of each inbred puppy. With similar genetics, this also increases the chances of the puppy being born with a hereditary disease as more genes carry it, thereby increasing the probability. Disease immunity and positive health may also be passed on but when individuals are inbred their experiences and genetics are not as wide-spread leading to increased chances of negative possibilities.

The most popular motivation for inbreeding is to achieve a litter with a similar aesthetic to that of the parents. Coat color, Size, muscle types, and even snout length are all possible breeding goals. However, genetic influence is a lottery and puppies may have any number of traits from either parent. This means that although the probability of the litter having the wanted traits is increased, so are any negative traits found in that family due to the inbred lines. This may mean that a litter of Boston Terriers have the ideal coat length but come out with the families well know eyesight problems.

Inbreeding can also affect puppies’ behavioral traits. The aim may be to produce a litter of high energy Labradors which is achieved, but they may also have high levels of aggression or anxiety.

How to avoid a high level of inbreeding within a gene pool?

Outbreeding is bringing in a member from a different gene pool to breed with a female and vary the gene pool, increasing the gene pool’s health. With breeding, it is easy to hire an AKC approved stud dog for breeding to allow for a healthy and branched litter of pups. The benefit of this is that you can look through a stud catalog to find a male that has your desired traits, while also not minimizing the health of the litter produced. Similarly, you can pay for a female to be fertilized by your stud dog and then gain ownership of the litter produced. This means the members of the litter you keep for breeding are genetically more healthy.

Heterosis is another suggested method of creating a healthier gene pool, defined as cross-breed breeding. This remains a controversial subject in the dog breeding industry due to implied health risks/ argued health benefits and influence on physical appearance. Many scientific minds state that this can be hugely beneficial due to the introduction of new genetics into the breed also known as hybrid vigor. Many experts debate this is merely a myth though and that outbreeding depression can cause reduced health in the offspring.

If breeders are determined to inbreed, it is strongly recommended to breed individuals who are distantly related and to monitor the coefficient of inbreeding regularly. Distantly related means the parents should not be parent and child, siblings or even first siblings. Ideally, though, outbreeding needs to take place to introduce a new genetic pool and maintain a high level of health within the family and for the offspring. Ultimately, in-breeding does have a proven negative impact and breeders have a responsibility to maintain high levels of health for all their animals.