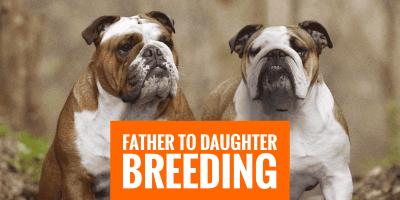 Breeding a father to his daughter dog is a classic case of very close inbreeding. Studies have shown that breeding closely related dogs leads to a decrease of the pure breed’s genetic pool, which consequently increases the rate of inherited and medical conditions.

As a very short and clear answer, nearly all breeders should never ever attempt to breed a daughter to her father dog, or any parent with any child. Besides the immoral and unethical relationship, it is the health of several generations that are at stake. With such close linebreeding, the risks outweigh the potential benefits.

Benefits of Mating a Father Dog to its Daughter

Inbreeding, or also called linebreeding, has been a proven tactic to clarify and isolate a variety of traits and characteristics in a dog’s appearance and abilities. By definition, it is the mating of two related individuals sharing common ancestors. There seem to be fewer people who promote the inbreeding between father and daughter in dogs, but the small minority of those who practice it do so for the very few benefits it may offer.

When it comes to this type of breeding, a breeder will have to determine a key component to measure the degree in which the two copies of a gene received are relevant to the ancestors of both the mother and father. This is classified as an inbreeding coefficient. A 0% coefficient would indicate no relation, 12.5% would indicate an average relation, and a 25.5% would indicate a very close relationship as we see with father and daughter inbreeding. There are methods in which a breeder can calculate this number more readily as shown by The Kennel Club.

Now, the question is why would a breeder want to organize what could be considered by humans an incestuous mating?

When performing this type of inbreeding between father and daughter dog, one would like to be assured that this can be used to bring out certain underlying genes to the surface. This is the main reason why people agree to mate these types of close individuals. The benefits reaped from this method can be good if done correctly and if the desired outcome comes to fruition. In doing this, it will require very serious judgment and caution, as this type of breeding is usually frowned upon.

Normally, all the offspring of the litter are preserved and kept so that the desired traits present and develop themselves over time. Many breeders who participate in dog shows may want to isolate certain personality aspects of a qualified exhibition-type dog, making performance and production dogs top participants. Breeders who inbreed for this reason are not to be mistaken for “assortative breeding” in which case, two unrelated dogs are mated for fixing particular traits.

Another common reason for mating father and daughter dog is the added benefit of homogenizing certain simple genes. The goal of genetic homogenization is that the gene pool becomes more populated with the more dominant traits which can only occur with very close inbreeding as we see with this close tie. Some of these genes that are desired could be anywhere from their color, a specific coat type, or even their size.

Because of their close inbreeding coefficient number, certain dogs’ traits have a higher chance of survival and reproduction in the offspring. Furthermore, this gives the breeder more room to work with when it comes to more complex traits such as speed and hunting abilities, for example. Most dogs, however, have a big enough gene pool that it may not be needed. Dogs who are regularly outside may be selected to compliment certain attributes versus using inbreeding to amalgamate possessed traits. Additionally, this can also be used to weed out certain illnesses such as dogs who are prone to bladder stones, by causing the recessive gene to be presented and allowing the breeder to select the ones that don’t show it for future breeding reference.

Unfortunately, the genetics behind an inbreeding do not differentiate between good traits and bad traits. Indeed, a dog’s traits may or may not be passed on regardless of whether they are considered good or bad in the breeder’s eyes. And this leads us to the many risks associated with breeding a father dog to its daughter.

Risks of Breeding Father to Daughter in Dogs

As a general accord, it is often highly advised NOT to breed father and daughter dogs because of the number of risks associated with it.

In fact, this type of breeding has been banned by The Kennel Club. Although some breeders provide a general rationalization for breeding daughter and father dogs, most often than not, the results are far from desirous. In the case of breeding father and daughter, the risks outweigh the benefits. In order to get a better understanding, one must comprehend what happens during the act of inbreeding of such close proximity. As mentioned, a father and daughter inbreeding coefficient is extremely close, resulting in higher probabilities of negative consequences to subsequent offspring. The risks need to be contemplated before deciding on mating two closely related dogs.

Close inbreeding has given rise to infertility cases in dogs because there is so much lack of gene variation in an inbred dog. More inbred males have been reported to have lower fertility rates than purebreds which makes the process very difficult for breeders to continue. The females have a higher incidence of delivering unhealthy whelps as well as experiencing more absorbed litters. Furthermore, inbred dogs have a higher mortality rate as well.

Many breeders get into the act of mating close relations with the idea that they can somehow perfect the traits, yet don’t take into account that this puts a serious damper on the available gene pool. In ordinary breeding, gene pools are expanded, giving way to an array of available traits in a species that allows for more variety and growth throughout generational lines. However, with close inbreeding, the gene pool loses its potential for expansion and stays severely limited. Small gene pools are more susceptible to genetic disorders.

While it is normal for dogs to get mildly aggressive at times, dogs who have been inbred closely tend to show abnormal signs of behavioral issues. These dogs usually lack affection towards other dogs as well as their own breeders, or owners. They also tend to be much more fearful in situations where purebred dogs do not react to. They are more impulsive and more anxious, exhibiting higher levels of aggression and irritation. Additionally, inbred pets tend to be less intelligent as well.

Inbreeding has a high rate of passing on abnormal or undesirous genes to the offspring. It is more likely to isolate a congenital defect than it is to isolate beneficial genes. This enables recessive alleles to be more prevalent in inbred specimens which can often lead to inbreeding depression and genetic diseases.

Such alleles are more likely to show up in close matings because both the father and mother are at higher risk of carrying the same set of these genes than the standard breeding practice. These defects can show up in a number of ways including diseases that compromise the immune system, abnormal faces and bodies, eye diseases, and even cancer. As a direct result of this type of close linebreeding, many of the dams have had to undergo C-sections because the pups had acquired such large heads.

One of the most distressing aspects of some of these congenital defects is that oftentimes they do not show up until later, so breeders may think they are in the clear early on just to realize that their dog is severely sick further down the road.

Should I Breed a Father Dog to its Daughter?

Taking in all the information regarding the benefits along with all the risks, one must conclude that inbreeding is not the safest bet, nor is it standard practice. It is not recommended to inbreed such close relationships such as father to daughter dogs because one cannot know the outcome, and considering the dangers outweigh the hypothetical benefits by a far shot, why even do it?

In the event that a breeder does decide to take the route of inbreeding, they must do it in good timing. Timing and patience are crucial when it comes to mating dogs because frankly if one doesn’t know what he or she is doing, it could turn out to have disastrous consequences. A breeder must be very attentive to details and have a thorough comprehension of the generational dogs preceding the two who are to be mated. The more background information one has, the better they can weigh out the potential effects with more accuracy. One must acquire knowledge of all the health defects of the ancestors to determine possible problems that may appear in the future.

One must take the time necessary to decide what traits one wishes to enhance and isolate with inbreeding so that those particular traits are concentrated in order to produce a more favorable dog. If recessive genes show up and can be eliminated this can provide a suitable host, as well as wanting to double up on the good genes and removing the unwanted traits. Breeders need to be able to produce predictable offspring in this case and only breeders who have had years of experience with breeding should be able to attempt to inbreed two dogs. And even then, they should not be so closely related. Moreover, inbreeding should be done if the breeder wishes to breed dogs for longer than two generations and want to correct the inbreeding coefficient in the future by widening, somewhat, the bloodline’s gene pool.

Another time it would be recommended to inbreed is to increase the litter’s market value. Breeders who are experienced and knowledgeable about isolating preferred traits are able to produce a more concentrated and homogeneous litter and use it for marketing. These are dogs that may be highly sought for, especially for their future offspring, too. Dogs that breed favorably for a number of generations through a number of mating are more preferentially selected for breeding. All in all, inbreeding should only come as a last resort for breeding considerations. And in addition, it should be noted that it’s only recommended if the intent and desire of the breeder is to mainly protect the traits that are not commonly found in any other active bloodline.

Breeding a daughter to her father dog is very risky and you should most likely never attempt to do it.