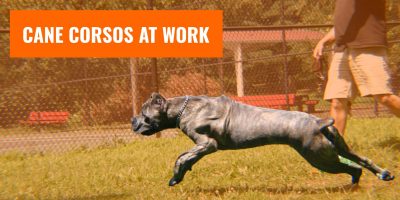 Highly intelligent, loyal even to death, and perfectly trainable, Cane Corsos are one of the most noteworthy and notorious of the Mastiff breed. These athletically inclined dogs have a more compact body than a lot of the Mastiff family, but their bodies are muscular and their bone structure is stately, so when a Cane Corso is in action, their movement flows gracefully. With the ripples of muscle reactions showing like a visual symphony of canine structures working in perfect harmony, it is profound to see this breed at work—and throughout history, its working ability is what the Cane Corso has been most admired for as a dog.

History of the Cane Corso as a Working Dog

The Cane Corso has a rich history as a working dog that originates in the Roman Times thousands of years ago. The dog’s name actually translates loosely from the Latin phrase meaning “bodyguard-dog.” Molossers, which is a subcategory of working breeds named for an ancient Greek group who bred larger dogs for working purposes on the Greek Islands, was brought to Italy where they were bred with native canines. The results of these breeding pairs are considered the ancestors of what we know the Corso to be today.

Originally, Cane Corsos were used in war zones where they would be used in many attack efforts. Some dogs would be outfitted with buckets of flammable fluids and sent charging through enemy lines carrying flames to subdue or distract the enemy just before a ground attack. Some dogs were trained to attack enemies in battle, sometimes even sent wearing collars with spikes and knives around their necks and ankles. When the Western Empire fell apart, the remaining dogs slipped into more civilian-related job roles and were a common sight across the countrysides of Italy. These dogs were used for hunting, to protect and drive livestock, to patrol farms and vineyards, and of course, to serve as loyal guardians of their owners and their properties.

Cane Corsos at Work in the Modern Day

These days, the Cane Corso may be most known as a loyal and serving family dog with its cooly competent personality and confidently willful demeanor, but this breed is still hard at work beyond being just a beloved pet companion. Cane Corsos are also still highly prized for their working capabilities and are used in several different fields because of their natural-born abilities.

The Cane Corso has that strong and intimidating physique, keen intelligence, and loyalty to their owner that makes the breed fit in well in policing environments. Even though Corsos are not the most common police dogs compared to German Shepherds or Rottweilers, they have been successfully trained and enlisted as K9 aids in the past. Soldier, a Cane Corso successfully trained at Iron Mountain K9 in Oregon, is one fine example.

Historically, the Cane Corso was trained to work with night watchmen as an added layer of protection during overnight surveillance efforts. The nightwatchman could send the dog out to secure the perimeter of the property being watched without leaving their own station or another area that needed to be scrutinized. Therefore, using Corsos as part of K9 policing units is not too far away from the breed’s historical job duties.

The Cane Corso on the Farm

Cane Corsos can have a different personality and drive traits according to its lineage, so some dogs with a high prey drive have been bred selectively to continue that deep-seated need to seek out prey. The beauty of this (if the dogs are not used for hunting purposes) is that very trait can be worked with by a good and diligent trainer to nurture a profound ability to protect other animals in farm settings. For example, a farmer may employ a Cane Corso to patrol the perimeter of a livestock field in an area where predators like coyotes and mountain lions are densely populated.

The high prey drive the dog holds serves this scenario well, but there are other roles for Corsos on the farm including things like:

Because Corsos are known well for getting along with other animals who they do not see or have not been trained to see as a threat, they work well with docile livestock types like horses, cattle, and sheep. Some farmers only use their Corso at certain times of the workday, such as rounding up a herd of cattle for milking or surveying for predators before locking up housing facilities, and the dog retreats to being the typical family pet or household guardian the rest of their day.

Some people want to bring home a dog for a specific reason, and when a prospective dog owner has a specific reason for investing in a large breed, there is usually an interest in bringing home a guardian for their household, their property, or their children. The Cane Corso has been entrusted with the task of being a family guardian for literally thousands of years. These dogs have been touted as being gentle enough to play with an infant yet ferocious enough to defend that child from anything or anyone looking to do harm. These dogs can even get along with other pets when properly socialized and trained, so they fit right into a household that may have other dogs or pets.

Numerous owners seek out a Cane Corso because of their notoriety as a guardian breed. Unlike many other guardian breeds, Corsos are not instinctively going to attack for no reason if they are not provoked to do so. The dogs tend to sense an owner’s uneasiness when a foe is around, so they will be on high alert as a protector should if something about a situation is amiss. Their sense of perception is highly regarded among Cane Corso enthusiasts because there are times the dog will sense danger before an owner realizes something is wrong.

There’s something to be said about the intimidating stature of a Cane Corso when used as a guardian. The body of the dog is a deterrent of its own. Much like much of the mastiff relatives of the breed, these dogs appear incredibly strong with their muscular build and broad stance. As one of the more compact of the mastiff family, however, the Corso is agile and fast during an attack. If an intruder were to break into a home and see a Cane Corso waiting for them, chances are, they would be too terrified to get very far. Not to mention, the Corso would likely have the intruder pinned before they ever realized the dog was there because of their ability to move silently like a stealthy sniper.

Corsos are such a popular guardian breed that there are multiple dog trainers who specialize in helping owners with a Cane Corso who want their dog to be specifically trained as a protector. For example, if you are a high-profile individual and want the Corso to be a guardian by your side during public outings or you want the dog to act as a protective guardian for your child, this breed easily takes up to this form of instruction. Through professional training and development, these dogs can be almost as instinctively effective at guardianship as a physical bodyguard.

The American Kennel Club recognizes multiple dog breeds as part of the Working Group. In order to be part of this group, a breed must be intelligent, rapid learning, always alert, and primarily bred to be an assistant to man in some way or fashion. Siberian Huskies, Great Danes, and Boxers are a few other examples of breeds who are part of this esteemed group set forth by the AKC. Cane Corsos have a noble lineage that reaches far back into history, they are incredibly smart dogs and readily trainable for different tasks. Therefore, the Cane Corso stands as a prime example of a working dog, and will gladly accept their dutiful role as a valuable and loyal companion with a job to do.

Curt Gebers is a widely recognized Cane Corso breeder based in the Red Rock Canyon Conservation Area outside of Las Vegas, Nevada. He has been breeding and enjoying the lives of Corsos since 2003. Gebers is an Approved Breed Mentor by the Cane Corso Association of America (CCAA), and an appointed member of the CCAA 2018 Election Oversight Committee. Corsos owned and bred by Gebers have obtained numerous awards, including 2018 CCAA Western Regional Best Of Breed, 2017 CCAA Puppy Of The Year, and the esteemed award for 2014 #1 AKC CANE CORSO. Find out more about Curt and his champion Corsos at the Red Rock Canyon Cane Corso website.