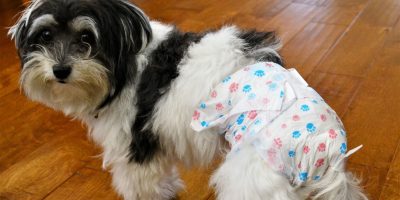 Owning a dog in heat with a male dog at home can be challenging. Not only is there the risk of accidental matings, but the behavior of your two dogs can be difficult to manage. While a male dog may become restless and insistent when he catches wind of a female, a female can become moody and pushy when she wants to get to the male.

Keeping a male dog with a dog in heat at home is not an easy task. You must be prepared to separate them at all costs. This might involve kennelling or boarding your male dog until your female dog’s cycle is complete. You will need to exercise them separately. And, for some dogs, it helps to mask the female’s scent by cleaning more often.

What Does It Mean When A Dog Is In Heat

When an unspayed bitch goes into heat, it means that she is physically able to mate and is receptive to attempts by male dogs. She will be releasing hormones to tell male dogs that she’s open to mating. But first, she goes through several stages, each one with its own characteristics.

The first stage is proestrus. During proestrus, the bitch’s vulva swells and you’ll notice bloody discharge. Next is estrus, wherein she is able to become pregnant. Her ovaries will release eggs ready to be fertilized. At this stage, her discharge is lighter in color, and your bitch may become more flirtatious with male dogs. After this comes diestrus, where your dog’s body begins recovering from the estrus stage. Here, she is no longer fertile, her vulval swelling reduces, and there will be little to no discharge. The fourth and final stage is anestrus. This is the resting stage of your bitch’s reproductive cycle and lasts until her next cycle begins.

An intact male dog will exhibit several behavioral changes when in the presence of a female in heat. You may find that your dog becomes more aggressive, insistent on getting close to the bitch, whining loudly, and being agitated. Even a mild-mannered dog might behave erratically when he spots a female in heat. This behavior can go as far as digging under fences or bolting across a busy highway. It is not unheard of for a male dog to travel three miles or more to reach an intact female when he catches wind of her scent.

Signs Your Female Dog Is In Heat

The signs that a bitch is in heat include a swollen vulva, bleeding from the vulva, licking her hind end more than usual, going to the toilet more often, and several behavioral changes. The behavioral changes may include being overly friendly to other dogs, roaming to find male dogs, moving her tail aside when touched, appearing anxious and restless, and mounting objects.

Do not keep your bitch outside when she is in heat to separate her from your male dog! A bitch in heat can attract male dogs from miles away, and it’s not unheard of to find stranger dogs in your yard who have been attracted to her scent. When she is outside you must supervise her at all times.

Owning intact male and female dogs can be challenging. Thankfully, there are some measures you can take. These measures may help your situation if you choose not to spay or neuter your dogs.

The most important thing to do when owning an intact male and female is to separate the two when the bitch is in heat. Under no circumstances should your intact male and in-heat bitch be kept near each other. Keep your dogs separated until her heat cycle is definitively over. This will involve putting the dogs in rooms on opposite sides of the house at all times. This, however, may not be enough for some very persistent males.

Do not assume that a door will stop your dog, as when left alone for long enough, male dogs are known to break or chew doors open to reach bitches in heat. Some breeders find it best to kennel their male dogs or bring them to a boarding service until the bitch is no longer in heat. Having a trusted friend or family member care for your dog until your bitch’s heat is over is another possibility.

One of the most important ways of keeping a male dog calm when a female is in heat is to exercise him. Be sure to take your dog for walks regularly. You’ll need to walk him for long enough for his size and breed. You’ll also want to keep your dog mentally stimulated during this difficult time. Some of the best methods include stimulating dog toys and obedience training! If your dog struggles to focus at home because of your bitch in heat, try training him away from home. You might consider enrolling him in training classes or participating in a dog sport to keep him occupied away from home.

If you’re unsure about how much exercise your breed needs, try talking to your vet for advice as well as doing your own research. Many dog breeds are high-energy and need outlets for their innate working drives. For example, the Belgian Malinois thrives on high-octane physical exercise. This breed needs at least 60 to 90 minutes of exercise every day to thrive. In contrast, an English Bulldog needs a maximum of 40 minutes of exercise per day. Going too far over this limit can be harmful to them, especially if they are unfit or have BOAS.

Another way to help your male dog is to make efforts to mask the female’s scent. A very important way of doing this is by keeping your household clean. While cleaning is a task that should be done regardless, it becomes especially important when you own a female dog in heat. A bitch in heat produces bloody discharge which is not only messy in the home but serves as a source of pheromones that attract male dogs. Be sure to clean any stains from discharge when you see them and keep your bitch’s sanitary area clean.

You may also consider using a spray to mask her scent, but these are not always safe for dogs. For example, menthol sprays are often sold with the promise to mask a bitch’s scent when she is in heat – but menthol is an irritant to the mouth and digestive tract of dogs. While it may be safe to inhale in small amounts, ingestion is potentially toxic. So what can you use instead? According to Clents Hill Vets, safe essential oils for dogs include cedarwood, clary sage, marjoram, chamomile, and ginger grass. Do not attempt to use anise, clove, mugwort, tea tree, garlic, camphor, or wintergreen essential oils around your dogs.

Dog in Heat With a Male Dog At Home :FAQ

Have any more questions or concerns about having a dog in heat with a male dog at home? Feel free to check out our Frequently Asked Questions for more details. If in doubt about your dog’s heat cycle, it’s best to ask your vet for advice!

What should I expect when my dog goes into heat for the first time?


When your bitch goes into heat, she will produce bloody discharge, her vulva will swell, and she will lick her rear end more than usual. She may also hold her tail close to her body and move it aside when touched. These are all normal parts of your bitch’s heat cycle, though they may be worrisome for an owner who has not seen it happen before!

Will my dog change after her first heat?


It’s unlikely that your bitch’s first heat will cause any significant personality changes once it’s over. However, as your dog matures, especially between the ages of 1 to 2 years, you may find that she exhibits behavioral changes, especially towards other dogs. And, keep in mind that if she learns undesirable behaviors when in her heat cycle, she may learn that her irritable behavior gets her what she wants.

Can a dog be fixed while in heat?


Your vet can spay a bitch in heat. However, there is more risk of complications when the bitch is in heat. This is because the blood supply to your dog’s reproductive tissues is significantly increased compared to when she’s out of the heat. This means that her tissues will be swollen and fragile, making bleeding more of a risk. So, she may lose a lot of blood during the surgery, which can be difficult to control and increases the surgery time. As a result, some vets will charge more to spay a bitch in heat.

How will I know when my dog is out of the heat?


When your bitch is no longer in heat, she will no longer be receptive to male dogs. Instead of allowing males to mount her, she may defend herself or seem otherwise disinterested in their advances. She will also stop producing bloody discharge when she is not in heat. Overall, the heat cycle should last 2 to 4 weeks.

Are dogs in pain while in heat?


Some dogs appear to be in pain during their heat cycle, while others appear moody and irritable. Dog heat cycles don’t involve the sloughing of the uterus lining like a human heat cycle does, and instead, the bleeding is all vaginal. This means that there should be little or no pain involved in the heat cycle.

Owning male and female dogs can be challenging. However, with enough knowledge and experience, it is possible. Always be responsible with your dogs and do not leave any chances for accidental matings.