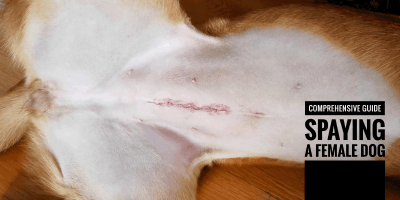 Spaying is specific to female dogs only. Many dog owners will be advised to spay or neuter their pet once it reaches an appropriate age.

The procedure itself can be used for multiple purposes and can vary in its process. It’s natural for owners to want to know more about any medical intervention being used on their animal.

Below are some of the most common questions about spaying a female dog.

What Does Spaying a Female Dog Mean?

Spaying a dog is the term used to describe the operation that renders a female dog sterile, usually an ovariohysterectomy. This surgery helps control the dog population and can prevent a whole host of other health complications in the female dog. Furthermore, spaying a female dog will also eliminate the heat cycle process. Neutering is for males, spaying is for females.

Dog spaying operations are offered at almost all veterinarian clinics and hospitals, and it is one of the most practiced operations in the world. Modern days have taught dog owners to spay their dogs if they weren’t planning on breeding them. More and more regular people do it because it reduces accidental breedings, and it’s also more convenient for owners not to have to deal with a female’s heat cycle (e.g. blood drops, mood swings, etc.)

Why Should I Spay My Female Dog?

The number one reason to spay your dog is to eliminate the chance of unwanted puppies. It’s a known fact that thousands of dogs already sit in shelters or foster care, waiting for homes of their own. See the ASPCA’s page on these statistics.

Unplanned breedings and litters of puppies add to this problem. If bred by an owner without experience or preparation, these puppies may even end up with many health issues, increasing their chances of being abandoned a few months down the line.

But there are more reasons to spay a female dog.

Many owners are unprepared for the hassle and clean-up that comes along with an intact bitch. Female dogs bleed (usually twice or three times a year) from their uterus and are fertile at this time. Any intact male dog in the area will be attracted to the female during her heat cycle. Once a spay surgery has been performed, the dog will no longer bleed or be able to conceive. Female dogs in heat show signs of mood swings changed behaviors and can be more difficult to deal with.

Pyometra is another great reason to spay a female dog sooner rather than later.

One of the most common reproductive problems seen in a veterinarian’s practice is pyometra. In Ancient Greek, the name literally means “pus-uterus.” Pyometra is a life-threatening uterine infection often affecting older, intact or unspayed, female dogs.

Additionally, female dogs that are left intact are prone to many health complications as they age. Mammary and ovarian tumors are common in middle-aged to senior bitches. If the ovaries are removed during a spay, the hormones that lead to these cancers aren’t being released any more, therefore, cutting any risk associated with it.

What are the Benefits of Spaying a Female Dog?

As previously mentioned, spaying a female dog stops her from being able to get pregnant. This means that the owner will be able to bring their pet to dog parks, beaches and other areas that dogs frequently without having to worry if their dog is still fertile or not.

As the female ages, she is less likely to develop tumors if she has been spayed. These tumors can be expensive to remove and may require dangerous surgeries.

Additionally, the behavior of a female dog in heat can be difficult to deal with. Intact bitches may frequently mark their territory in order to attract nearby males. If the dog is spayed, she will not exhibit these unwanted habits.

Is Spaying a Female Dog Risky?

In a healthy, mature female, spaying carries very little risk. It’s important to wait until the dog has aged, although the prime time for performing the surgery is still argued. Because of their rapid growth rates, some vets suggest waiting until after a dog has gone through puberty if it is a giant breed.

That being said, some complications can occur if the female already has a pre-existing health condition. Furthermore, the use of anesthesia always carries a small risk of issues, although with modern technology these do not happen often.

So, as long as your dog is younger in age and does not suffer from any major health issues, spay surgery has a very high chance of being successful. The procedure is standard and is performed by most veterinarians regularly so they know how to deal with it!

How Much Does Spaying a Dog Cost?

On average, the price of spaying a female dog commonly ranges from $50 to $300. In some situations, additional costs can be added such as an overnight stay at the vet clinic, or other optional care procedures.

For a healthy dog that is not old or overweight, a spay surgery should not be outrageous in price. One thing to note is that larger breed females cost more than smaller breeds. This is due to the amount of anesthesia needed to perform the operation.

The location of the veterinary clinic or animal hospital also impacts the overall cost of the surgery. Different regions will have varying prices for surgical procedures and for the equipment to do them. In some instances, universities will charge less than standard vet clinics to carry out a spay surgery. They may have a veterinary student watch or perform the operation. Some shelters also offer discounted rates or donations to spay a female dog in attempts to control the pet population.

Is it Ethical to Spay Your Dog?

The answer to this question really boils down to the individual situation of the dog and owner.

On one hand, experienced dog breeders who exercise great care in their breeding practices would never spay their female dogs. To them, spaying a bitch in good health would not be advantageous and clearly counterproductive.

Regular dog owners, on the other hand, need to be absolutely sure that their female dog will not have access to intact males if they decide not to have her spayed. Unwanted puppies are a huge problem in most parts of the world, and bringing beings into this world that have no one to take care of them is considered unethical by the public opinion.

That being said, if the dog can be safely kept indoors or in a fenced-in yard during her heat cycles, the health benefits may outweigh the inconveniences of an intact female.

When Not To Spay a Female Dog

While spaying a dog is generally safe, there are some scenarios that can make it inappropriate. Some vets will recommend an ovariohysterectomy during a dog abortion procedure, however, there is an increased risk of serious bleeding while the dog is pregnant.

With recent studies being released about the correlation between certain cancers and early or any spaying, many owners are looking to other preventative measures for dog birth control. Large and giant breed bitches seem to benefit the most from a delayed or forgone spay surgery. Examples of studies can be found here, here and there for a great post on the Scientific American blog.

Another at-risk group for spay surgeries are females who already suffer from severe health problems. Obese dogs tend to experience complications on the operating table. Also, dogs advanced in age have a harder time dealing with the effects of general anesthesia and may be advised not to have any type of surgery.

The Different Types of Spay Surgeries

When it comes to spaying a dog, one size doesn’t always fit all. Deciding which surgery to choose is up to the owner and what their lifestyle will allow.

The most common type of spay by far is the ovariohysterectomy. During this operation, both the ovaries and the uterus are removed, meaning the dog’s womb is absent and no more sex hormones will be produced. It is the most commonly performed surgery in most if not all vet clinics.

A second option is an ovary-sparing spay, where the ovaries are left inside the dog but the uterus is removed. The female will no longer be able to get pregnant and will not go into heat. Because the ovaries are left inside the dog, sex hormones will still be produced. This means that growth rates will not be affected by the spay. Mammary and ovarian tumors can still develop as the dog ages. This is because they are caused by the release of hormones from the ovaries.

Ovary-sparing spays are a relatively new option and may not be offered at all clinics.

For those that decide to have their female dog spayed, special care should be given to the animal during the healing process. There are steps that can be taken to ease to the recovery period.

Caring For a Bitch After Her Spay Surgery

After a spay surgery has been performed, it’s important to closely monitor the patient as she wakes from her anesthesia. Her heart rate and breathing will be watched to ensure they continue at a normal rate. Additionally, drugs are still running through her system so it may take a day or two for her entire behavior to be back to normal.

Once the dog has been discharged, the owner will be in charge of checking for post-op complications. The female dog will be left with an abdominal incision, usually closed shut using sutures. It is important to check the surgical wound daily for any sign of:

Also, if the dog becomes lethargic and refused to eat for days after the procedure, contact your vet as soon as possible. These regular activities should resume as the wound heals, so give it two weeks or so.

Accept that the dog has undergone a major procedure. Bouts of aggression, excessive sleepiness, and even drowsiness are to be expected in the hours and days after spay surgery. The use of an Elizabethan collar can help reduce issues from the dog biting or scratching at the incision site.

If regular sutures have been used, a return trip to the vet will be needed to have them removed. This usually takes place 1-2 weeks after the operation. Dissolvable sutures may be used instead, and do not require a second appointment for removal.

Try to introduce food slowly to your dog after her surgery. It can take a bit of time for the desire to eat to return to your animal, so a bit of encouragement may be needed. It is important to keep her hydrated during the healing process, so provide lots of fresh water throughout the day.

If your dog was in heat at the time of surgery, it is imperative that you keep all intact males away for several weeks after. Her abdominal area will be tender at this time and may become damaged if a male dog mounts her.

Any serious signs of unwellness like rapid breathing, a racing heartbeat or vomiting, and diarrhea indicate something is going wrong within the dog. Bring the dog back to the vet or to an animal hospital immediately if these symptoms occur.

Provide slow and steady exercise for your dog in the days after her spay surgery. Short, leashed walks can be good for her recovery, but excessive exercise and vigorous play should be avoided for at least two weeks from the operation.

Many people choose to have their female dog spayed for both health and lifestyle reasons. The surgery can be performed safely if the dog’s health situation is assessed correctly. Choosing an experienced vet can make the process even safer but will inevitably increase the total vet bill. Monitoring the dog after the spay can help identify complications quickly and provide the best outcome for the animal.