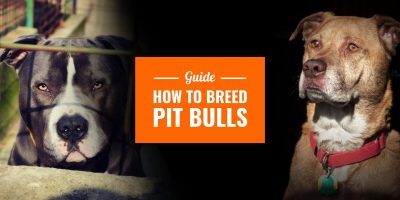 Those wondering how to breed American Pit Bull Terriers are generally confused by the wealth of contradictory and controversial information available online. Pitbull breeders and breed clubs have their very own ideologies and preferences, and they try to reappropriate the breed to themselves.

The bully world, mainly due to a lack of official authority, is plagued by petty marketing tactics. Every other fancier tries to market his or her dogs like they are the most real APBT specimen. Diversity is important in a dog breed’s long-term health perspective and the pitbull has been blessed with so much variety! Bluenose, red nose, short, muscular, pullers, family pets, fawn-colored…

When breeding pit bulls, please understand that there is not “one” pit, there are many! (And it’s totally okay…)

During the 1800s, breeders in the British Isles bred Old English Bulldogs with Old English Terriers to create Pit Bull terriers, which later became the American Pit Bull Terrier (APBT) after immigrants brought them to the United States. The combination of bulldog and terrier made for a breed that many considered heroic: strong, athletic, and brave, while still being gentle and kind around loved ones. One must now confuse American Pit Bull Terrier with the similarly named Bull Terrier.

Once in the United States, APBTs showed their versatility by serving a variety of roles, from farm dogs to family dogs. They were an extremely popular breed for a long time in the U.S., known for their loyalty and bravery. Unfortunately, some unethical breeders gave the APBT a bad reputation by breeding for increased aggression. But the true APBT breed is still a gentle, loving, and friendly breed that makes a great addition to any family.

When the first pit bull terriers were being bred, two strains were developed:

Eventually, the two became recognized as separate breeds but initially, they were two sides of the same coin. Just like there are working lines of German Shepherds and conformation show lines.

Today, under the umbrella of American Pit Bull Terriers there are many different bloodlines with slightly different variations.

Some of the most popular and influential bloodlines that were created are:

The APBT is banned in the United Kingdom, Ontario, and in hundreds of municipalities throughout the U.S. Due to negative publicity and a bad reputation over the past 30 years, pit bull-type dogs have been the target of breed-specific legislations in well over a dozen countries including Canada, Australia, New Zealand, Ecuador, Malaysia, Puerto Rico, Singapore, Venezuela, and several European countries.

Pit bulls also carry some extra liability. Dog owners can be held liable if their dog injuries another person or animal, although homeowners and renters insurance can provide coverage against these claims. However, some insurance companies attempt to limit their exposure to these claims by placing restrictions on certain breeds including pit bull-type dogs, Rottweilers, Doberman Pinschers, and more.

There are even about a half-dozen airlines that have placed embargoes on pit bull-type dogs, including American Airlines, Delta Airlines, and United Airlines.

Early in the 20th century, the APBT was commonly used for bull-baiting, a rather cruel sport in which one or two dogs harassed a bull until it collapsed from fatigue. After this practice fell out of favor APBTs became popular farm dogs (due to their strength and athleticism) and family dogs (due to their gentleness with humans and especially children). They remained a popular breed through the 1950’s and was even used as an American mascot of sorts during World Wars I and II to symbolize loyalty and bravery.

Unfortunately, a side-effect of this breed’s obedience means that in the hands of an unethical handler they can be trained for dog-fighting. And when dog fighting began to increase in popularity in the 1980s, the APBT’s reputation took a hit as people began to associate them with this illicit activity.

Fortunately, the APBT has made something of a comeback in recent years. After the scandal involving NFL quarterback Michael Vick and his Bad Newz Kennels, the media began to recognize APBTs not as a violent breed—but as a gentle and obedient dog that had been taken advantage of. Thanks to educational efforts, today more and more people have a more accurate image of what an American Pit Bull Terrier really is.

Bully breeds and the American Pit Bull Terrier, in particular, are healthy dog breeds. This is most likely due to the wide genetic variety available allowing for a large gene pool. Some of the health conditions that APBT breeders have to be aware of include:

Demodectic mange, or demodex, is when your dog’s skin gets infested with tiny mites that feed reside in the hair follicle and oil glands of the skin. It typically leads to skin lesions, hair loss, and even genetic disorders or immune system problems. Ultimately, however, the type and severity of symptoms depend on the type and number of mites in the dog.

Demodex is not usually a serious condition and most dogs are able to stop the growth of mites on their own. Once this happens, the dog’s immune system is typically able to prevent future infestations. Contrary to popular opinion, demodex cannot be inherited…although it can be passed along after birth from mother to pup.

For this reason, f you have a dog with a serious case of demodex, you should not breed the dog until the infestation can be treated.

Hip dysplasia is an orthopedic condition that is attributed to a loose connection between the hip and thigh bones that leads to hind hip pain and even lameness. While it’s mostly seen in larger dogs, it does have a tendency to occur in pit bull-type dogs as well.

Symptoms typically have to do with your dog’s ability to move. If your APBT starts moving more slowly, has trouble getting up or lying down, or seems reluctant to run or play, it may be a sign that they are experiencing pain from hip dysplasia. “Bunny hopping” is another common sign of this condition.

Diagnosis is usually made through a physical examination in which a veterinarian examines the dog’s movement and gait. If it’s determined that the dog has hip dysplasia, treatment can include a wide range of interventions including weight loss, supplementation, controlled exercise, and surgery.

Thyroid dysfunction appears in a few pit bulls. Hypothyroidism is an endocrine disorder of the thyroid gland that affects many middle-aged purebred dogs. It causes a slowing of the metabolism, resulting in low energy, weight gain, and an unwillingness to exercise. It can also cause skin issues including sky skin, scaly skin, and alopecia. Many times these symptoms come on gradually, leading many owners to mistakenly attribute the symptoms to natural aging.

Patella problems are common in dogs, in general, and pit bulls are no exception. Along with hip dysplasia, patella problems can also occur in APBTs. The patella refers to the knee joint and can result in pain and difficult movement. Treatment options for this condition are liable to include glucosamine supplementation, weight loss, and gentle exercise. Surgical interventions also exist.

Congenital heart defects come in different ways. The American Pit Bull Terrier is known to suffer from several different forms of congenital heart disease, such as irregular valves and arrhythmias. These problems can range in severity from minor conditions that case no real symptoms, to major problems that require medication and even surgery.

Pitbull breeding is relatively easy on a physiologic and anatomic label. The breed is large enough to avoid most anatomical whelping issues, and the overall health of the breeding bullies does not make them a breed at risk. Particular care must be taken for the diet of a pregnant pitbull bitch: she may lose muscle mass if you do not increase the calorie and protein density.

On average, an American Pit Bull Terrier will give birth to 5 to 10 puppies per litter. The size of the litter will vary depending on the age of the two parents, the size of the mother, and the overall fitness of the female. If you are interested in what influences the potential size of a litter, have a quick read of our blog post.=

Not surprisingly, pregnant and nursing pitbull females require an increase in calories and nutrients to deliver a healthy litter of pups. Pregnant and lactating pit bulls can require up to three times the normal amount of calories when lactating (especially during weeks 3-5 of lactation).

High-calorie dog food makes it easier for dogs to get all the calories they need. One popular brand of food for many pitbull owners is called Bully Max. One cup of their High-Performance Dog Food contains a whopping 535 calories, which is 2-3 times more than most commercial dog foods. For this reason, and due to its high protein and nutrient content, Bully Max is a great choice for any APBT breeder who wants to raise their dogs to be strong and healthy.

It goes without saying that APBTs get their strength and size from their bulldog roots and their speed and agility from their terrier half. In terms of breeding your own pitbull bloodline, you cannot simply put all the effort into picking two athletic parents and hope for the best with your puppies. Characteristics and traits making a pitbull a great contender is mainly acquired rather than inherited (see nature vs nurture). Meaning, the puppies may inherit a promising potential but only consistent training over the years will deliver results. The saying goes “hard work beats talent when talent does not work hard”.

As explained in our introduction, there is a lot of diversity in the breed and despite some colors or pit bull traits being hyped up today, such fads change very quickly. You do not want to breed for today but instead, decide on what your lane is and stay on track regardless of the surrounding current events.

While there has been a lot of negative publicity about pit bull-type dogs, it’s important to keep in mind that this isn’t the fault of APBTs or their behavior. Instead, it stems from unethical handlers who have bred pit bulls with the intention of creating aggressive guard dogs and fighting animals.

The truth is that American Pit Bull Terriers are a loyal, kind, and brave breed that makes an outstanding companion and family member. They’re also known for being goofy at times—rolling around on their back, letting their head hanging over the couch, and generally making their owners smile.

However, as much as APBTs love humans, they do have a tendency to be aggressive toward other dogs. This doesn’t make them a “mean” dog; it just means that it’s important for any APBT owner to be educated and dedicated to giving their dog the training it needs to ensure safe socialization.