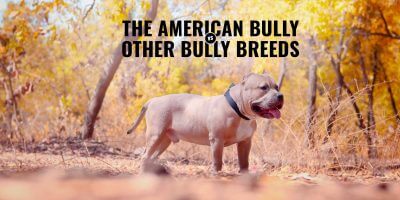 Did you know that the American Bully is the mix of four of the strongest breeds in the world? That is why we are going to compare the American bully versus other bully breeds, so you can see what makes it special and different. Although they look similar and share similar ancestors, they have key differences that we will point out throughout the article.

We are going to go deep into the bully breed to help you determine if the American bully is the right choice for you, or instead of the other bully dogs are more appropriate for your needs and expectations.

If you are searching for Bully puppies, check out our listing of the most popular and influential American Bully kennels to date, including Remyline, Gottiline, and more.

The American Bully is one of the latest formed companion dog breeds (recognized by the United Kennel Club since July 15, 2013) and it features a powerful and sturdy body, which is paired with a surprisingly loving, friendly and zesty temperament.

In addition, it is very important to remark that American Bullies are not Pit Bulls. They are two different types of dogs, although there is some pit bull blood within most American Bullies.

The American Bully is the result of exhaustive selective breeding by combining the best features of American Staffordshire Terriers and the American Pit Bull Terriers. They are the official ancestors of this breed.

Nonetheless, as mentioned in the introduction, there are other breeds that might have gotten into the mix, such as the Olde English Bulldogge, the English Bulldog, and the American Bulldog.

Nonetheless, some breeders have incorporated other bully and non-bully breeds. The easiest way to detect it is the temperament. If the specimen is aggressive, then it might have non-bully dog breeds in its lineage.

The American Bully is a clear definition of strength and power. With a sturdy, wide and strong complexion, which displays outstanding muscle tone, it is easy to understand why. Below you will find more info along with appearance standards.

Officially, there are four recognized types of American Bully. Below you will find the size info for each one.

Here we will review in brief the most important physical standards of this breed:

The American Bully is a mix of confidence and braveness, combined with a friendly, loving and pleasant temperament. Therefore, it is an ideal family dog because it is not aggressive and loves to please its owners.

Furthermore, this breed is very intelligent, and due to their desire to please, they receive and accept training without problems. Nonetheless, despite all the efforts of breeders, this breed still has temperamental issues with other animals.

The American Bully breed is susceptible to the following problems:

Now let us compare it to other popular breeds to mark a clear difference between the American Bully and them.

They are two different breeds, even though some people still think that American Bullies belong to the same family. Below you will find the main differences.

Therefore, this breed was brought in America by English immigrants in the 19th century. Thanks to its best traits, it was used in the breeding of the recently standardized breed known as the American Bully.

From a first look, they have clear differences in terms of appearance. Below you will find a complete recap.

In terms of size, the American Pit Bull Terrier is smaller and less muscular. These are the official stats:

When compared against the regular American Bully in terms of weight, it is easy to see the difference because a specimen of this breed can weigh as much as 120 pounds.

Let us also compare different physical features to fully appreciate the unique traits that set each breed apart from each other.

They are very affectionate and loving since their breed is people-oriented. Nonetheless, it has a strong prey drive, which is similar to the American Bully. Both breeds are excellent family dogs since they love children and adults alike.

Two powerful breeds but with remarkable differences. Even though they share a common ancestry, we are going to point out what features make each breed unique.

The Bull Terrier breed is older because the first registers come from the 19th century. They were bred to fight and their ancestors are the several Bull and Terrier crosses. In consequence, we can name the Manchester terrier and the Olde type of bulldog as its ancestors, but there are more.

According to history, this breed also received an infusion of Dalmatian blood to bring it its characteristic appearance. Furthermore, other possible ancestors include the Greyhound, the Spanish pointer, the Foxhound and the Whippet.

In conclusion, the Bull Terrier is an older breed with a richer selection of ancestors.

Now that we have reviewed in short all the ancestry of this breed, let us check the difference in terms of appearance.

They come in two different sizes, and although they are powerful and packed with plenty of muscle mass, they are significantly smaller than the American Bully.

In terms of height, the standard Bull Terrier stands as the tallest. Nonetheless, in terms of weight, it cannot compare. The American Bully, at a minimum, weighs 70 pounds, whereas the maximum weight of a male Bull Terrier is 65 pounds.

Unlike the American Bully, they have aggressive tendencies. That is why early training is essential for their development. Although, when provided with training, it is a lovely and excellent dog for families.

We can trace back the origins of this breed to the 19th century because it was a dog bred for fighting. The main ancestors of the Am Staff are the olde English bulldog and several terriers, to unite desirable traits such as tolerance to pain, quicker reactions, and drive.

In conclusion, it is an older breed because it has given origin to the American Bully, which became a recognized breed in 1990, whereas the Amstaff gained AKC recognition in 1931.

Similar to the American Pit Bull Terrier, these breeds have specific differences in terms of appearance.

It has a strong, powerful and athletic build, but as we are going to see, it is still smaller than the American Bully.

When compared against the standard American Bully, the difference is evident. A normal male specimen stands at 20 inches tall and weighs an average of 90 pounds, which greatly overcomes the size measures of the American Staffordshire Terrier.

Let us check what physical features differ from each breed.

This dog is confident yet loving and loves to please its owners. Therefore, they are good-natured and dependable, and in consequence, they are good family dogs. Nonetheless, they require early training to avoid potential aggressive tendencies.

The English Bulldog has a lot of history in common with the American Bully, but they are different breeds. Below you will find our complete comparison.

This breed is much older than the American Bully. For example, the first registers of the ancestors of the Bulldog come from the time of the Ancient Romans (31 B.C. to 476 B.C.), because they describe a dog with a wide mouth and a fiery temperament that helped soldiers in battle.

Historians affirm that these references were meant for the Alaunt dogs. Therefore, we can conclude that the main ancestor of the Bulldog is the Alaunt, specifically the working dog line.

It is also worth mentioning that some breeders believe that the Asiatic Mastiff is another ancestor. Nonetheless, this affirmation is subject to controversy.

Nonetheless, it is worth mentioning that the English bulldog has very low genetic diversity, which is due to a small founding population and possible artificial genetic bottlenecks resulting in a small gene pool.

This breed was widely used in bloody sports such as bull-baiting, and therefore, it was used to breed fighting dogs, due to its tenacious, fiery and brave temperament.

The American Bully is notoriously different. Nonetheless, below we prepared a complete summary of the physical differences between American Bullies and Bulldogs.

To deepen our analysis, let us check the principal physical features of this breed versus the American Bully.

The English bulldog is docile, gentle, dependable and sweet. They are people-oriented like American Bullies, and therefore, they need plenty of attention and affection.

Nonetheless, it is worth mentioning that they are wary of strangers and other dogs. Therefore, early socialization and training are key for the correct development of their temperament.

The Olde English Bulldogge is a powerhouse of a dog. Let us review in a complete fashion the main differences with the American Bully.

We can trace back the ancestors of the Olde English Bulldogge between 1600 and 1700. Therefore, we can categorize the molossoids and the bandogges as the main ancestors.

Nonetheless, it was just recognized as a breed by the UKC in January 2014. This dog was bred to recreate a dog that existed centuries ago. However, they changed their temperament because such a dog was used for controlling livestock and for participating in blood sports such as bull-baiting.

The Olde English Bulldogge is strong and powerful just like the ferocious dog from centuries ago. Below you will find more info about its appearance and how it compares against the American Bully.

Although it is stocky and sturdy, the American Bully is still the bigger dog since it stands taller and heavier at an average of 90 pounds. In the case of the standard, it can reach up to 120 pounds, whereas the American Bully XL can weigh as much as 150 pounds.

Let us also review the most notorious physical features in comparison to the American Bully.

Its temperament is stable, loyal and courageous. They are very affectionate and especially friendly towards children, who they will protect no matter what. They are also very outgoing and love to please. In consequence, they are ideal family dogs.

Now you know principal differences of the American bully versus other bully breeds. As you have seen, they have key similarities, especially in the temperament and muscular build, but also differences such as:

They also have different health issues and potential genetic defects. Nonetheless, to ensure that you get a healthy specimen, it is essential to screen the breeders beforehand and to request all the health tests that address the principal health issues of the breed.

Furthermore, early training and socialization are key for developing the correct character in any bully breed. Pairing this with proper nutrition since they are puppies will allow you to have an amazing family dog that will live and love to please you.