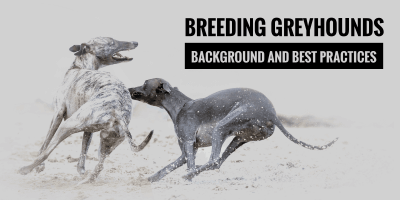 Breeding greyhounds is a delicate Art — it’s a very popular breed with bloodlines going into very different directions! Some breeders see Greyhound breeding as a way to enhance the natural physical aptitudes of such fast dogs, while other breeders will put the emphasis on the refined slender physique of the eye-catching breed.

Either way, the Greyhound breed may be very gifted but it is also the victim of several cases of abuse that should be addressed in the future. This is the only way for the breed to carry on shining as it has done for the last centuries.

In this article written by Calli, knowledgeable Greyhound loved, the history of the breed will be covered, as well as its current situation and the future of Greyhound breeding.

When I think about a Greyhound the first thing that comes to mind is FAST. Throughout history, performance has been paramount in Greyhound dog breeding.

Historically, the law only allowed the nobility to own Greyhounds, and if commoners were caught with these hounds they suffered severe punishment. Commoners knew the usefulness of Greyhounds in hunting and owned Greyhounds despite the law, making black, blue, and brindle Greyhounds a good choice for commoners as they camouflaged well when hunting, while white and fawn Greyhounds were preferred by the nobility.

Queen Elizabeth, I felt that there needed to be some standardization of coursing and created the “Laws of the Leash.” These rules formalized coursing and how it was scored. Coursing waxed and waned in popularity until the Industrial Revolution. With the Industrial Revolution, people welcomed more free time and money. Coursing began increasing in popularity, with the first Greyhound studbook created in 1882.

People loved the entertainment of coursing but one entrepreneur, Owen P. Smith, felt that he could increase the thrill and make money. Smith created the mechanical lure.

It took some time for Greyhound racing to catch on — the first track in America was opened in Emeryville, CA in 1919. This track was a flop, but Smith believed there was something to his mechanical lure and went to Florida. Greyhound racing took off in the Sunshine state.

In Greyhound racing and course there is not a written standard that breeders breed to. There are also no titles that can be acquired by owners but sweepstakes races and national cups putting the fastest Greyhounds in the country against one another. Performance is key in breeding and training racing Greyhounds.

I should mention that Kennel Clubs do have a written standard for their Greyhounds. These Greyhounds look and perform much differently than the racing and coursing Greyhound. Therefore, breeding Greyhounds can follow different tracks depending on the breeder’s preferences.

Greyhounds are relatively healthy dogs. Greyhounds do have blood, liver, and thyroid lab valves that are different from other non-Greyhound dogs; however, these differences have been well studied and do not represent a health concern.

One of the reasons the Greyhound is healthy is due to its diverse breeding pool, one of the largest of any purebred dog in the world. However, the breed is at risk for severe cancer without a cure, osteosarcoma.

Osteosarcoma (OS) is a cancer of the bone. This is often seen in large breed dogs, especially racing Greyhounds, Irish wolfhounds, and Rottweilers. The canine version of OS is very similar to human OS often diagnosed in children. Currently, researchers are looking at possible molecular subtypes of the disease, but for now, we know that there are 33 locations on the chromosome of the Greyhound that could potentially activate the hereditable OS.

The current treatment has two options and both include amputation of the affected limb. One plan focuses on palliative care while the other includes chemotherapy. OS will continue to be at the forefront of research. Currently, several vaccines are being studied for possible treatment of OS—this would be not only revolutionary for Greyhounds but promising for children suffering from this terrible cancer.

Another health concern that is seen more often in kennel club Greyhounds is neuropathy. Neuropathy is a painful disease that causes an inflammatory change in the nerve cells. This presents a weakness causing a change in gait. This disease is inherited and fortunately, there is a genetic test for this. Testing for this genetic condition has been helpful in reducing the number of Greyhounds affected by neuropathy, as Greyhounds that carry these genetic traits should not be used in any dog breeding program.

The goal of Greyhound breeding is to further the performance standard. Breeders want to breed the best to the best to create a more driven, healthier, and faster Greyhound with each generation. This is no easy task, as the Greyhound has a deep genetic pool. Oftentimes the sire of Greyhound litters are well known but the dams are generally lesser-known and sometimes simply a mediocre racer; however, the dam generally has very impressive littermates and the breeder hopes that those family traits will pass on to her litter.

When selecting a breeding pair the breeder must keep multiple factors in mind. First, what does he want in the breeding? If he wants an agile greyhound that can make hairpin turns his selection would be different from a breeder who wants stamina and a Greyhound that can handle distance running. The breeder must also consider the drive in the breeding pair. Breeding racing Greyhounds is not just about raw speed; it takes smarts and coordination and heart to position themselves appropriately to win races. It is virtually impossible to find a pair that completely complement one another, thus breeders will consider how to compensate for flaws.

Various breeding methods are used when breeding Greyhounds. However, with the increasing use of frozen semen, more and more breedings occur with artificial insemination (AI). Frozen semen is very accessible and supports diverse breedings within the Greyhound community, as frozen semen can be shipped worldwide. When using frozen semen there are various methods of AI:

All produce good results; however, having the semen directly placed into the female’s uterus is a more direct approach and minimally invasive to the female.

Greyhound racing is not dead in the United States, with new tracks opening and a doubling in the handle of BetAmerica Daytona 550 since 2015. However, despite increased interest, I am not sure that we will see a huge rise in Greyhound breedings and puppies, as numbers have been stable over the last five years. Greyhound breeders in the US are in a good spot, they are breeding the correct number of dogs to fill racing kennels and also be adopted or re-homed in their retirement.

The welfare of the Greyhound is very important in Greyhound racing. With continued attention to the lifelong welfare of the racing Greyhound, I feel that breeders are very attuned to their breedings — aiming to create exceptional dogs without large increases in the numbers of whelping. I feel that continued attention to the successful selection of a breeding pair is essential to create the Greyhound of the future, continually striving for the performance standard.

Make sure you take a look at our buying guide for Greyhound clothing!