A quick interview with Jim Daly, a famous trainer, and owner of racing Greyhounds in the United Kingdom. He trained Champions such as Jesters Nap and Touch Tackle and brought them to the highest sphere of British Greyhound racing.

Check out our review of the best greyhound clothes!

Jim, you're a renowned racing greyhound trainer and owner; what drove you to do this activity for decades?

My first visit to a greyhound track came at Wimbledon Stadium at the age of 12 years. Watching a greyhound at full speed was my initial attraction. They are incredible athletes and so beautiful in full flight.

I’m now 47 and love greyhounds as a breed; we also have several retired greyhounds as pets – I love them all they truly are like my children.

What are the main three focus points you study when evaluating a Greyhound puppy as a potential quality racer?

If you’re buying a Greyhound puppy at around 12 weeks old, I would recommend you to look closely at the ability of both parents: they must be a good sire and a good dam that are already proven to produce winners. That way, you are giving yourself a better chance of owning a future champion. If it happened once, it may happen again.

Confirmation is also important: if you are not sure what to look for, make sure you ask someone experienced for a second opinion and pieces of advice for when you are going for a visit at the breeder’s kennels.

Temperament during the visit but also of the parents, as well as the size, are also factors I would look at in a Greyhound puppy I want to race.

Most of your dogs come from Sean, Michael and Pat Dunphy at Droopys Stud; what does this line have that most other bloodlines don't?

We buy a lot of greyhounds from Sean, Michael and Pat Dunphy. They indeed run Droopys Stud in Ireland and have consistently been producing top-class greyhounds for decades. It’s an amazing success story they have.

Their set up, on a 200-acre farm, is awesome. It’s not just good sires and dams that are the key to their success, it’s also the facilities they have and attention to detail.

Was your best specimens' greatness inherited or acquired through training?

Touch Tackle and Jesters Nap have been amongst our most successful greyhounds on the track and in both cases, I would say their ability was inherent. If you look at the pedigree of both dogs on their dam side and sire side they had come from bloodlines that had seen top-class success for several generations.

The genetic material of a given dog is only a potential that we, trainers, must work hard to express and maximize over time using our own programs and strategies.

Inbreeding, linebreeding, and back-breeding are allowed with Greyhounds. It’s perhaps not so common in England and Ireland as it would be in Australia, though.

Many breeders here prefer to out-cross and that’s why we have more Australian and American sires available in recent years to freshen up bloodlines.

What does an average training day look like at Jim Daly Kennel?

Sure, here you go for my average day’s schedule:

If we go racing we can often leave the kennels at around 3pm and get home again at 1am. The days of any dog breeder vary depending on obligations and anything that comes up urgently. It’s about putting the dogs first and adapting to all surprises each day provides us with.

What's better for an outsider wanting to own racing Greyhounds: buy a puppy, a schooled dog or a racer?

I prefer to buy fully schooled from Droopys Stud; we have had some lovely greyhounds purchased this way and have confidence in getting value for money from Droopys Stud. Buying a puppy leaves too much uncertainty which is not acceptable at a certain level.

What are the mistakes you notice the most in nowadays' racing Greyhound breeding?

I think one of the most common mistakes in racing Greyhound breeding is aiming to breed with too much pace. By that, I mean breeding with a sire with high early speed who doesn’t run strong to a 480-meter distance and using a bitch of similar running style. Nick Savva (video interview below) one of the most successful British breeders of all time had great success from crossing top-class longer distance running bitches with a sire who was a top class at 480 meters. It’s a complementary match.

Rearing in small paddocks is another mistake I’ve seen — Greyhounds do need plenty of room to stride out while being reared in their first year.

Also, a lot of greyhound breeders new to dog breeding tend to use bitches that are from unsuccessful lines. There’s an old saying in dog breeding that says “with him as my sire and her for a dam, what can I be, but just what I am.”

What are your plans for the future?

Jim Daly Racing Kennel is currently contracted to supply runners to Ladbrokes Stadium at Crayford in Kent. It’s a great track to be employed by and hopefully, we can enjoy years of successful racing there! I would love to win their major race the Ladbrokes Golden Jacket someday.

But like any responsible Greyhound trainer today, amongst our plans will always be to do everything we can to find good loving homes for all our Greyhounds when they retire from racing. Greyhounds make the greatest pets! If you’d like to know more about giving a home to a retired greyhound contact the Retired Greyhound Trust. 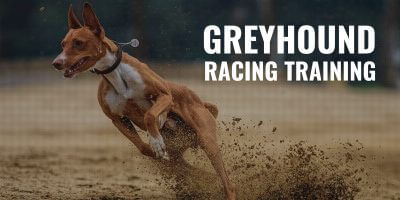 One comment on « Q&A with Jim Daly, Trainer of Racing Greyhound Champions »