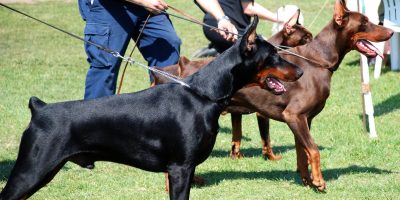 The dog show world is full of drama. We have the pleasure to get an honest and raw count of these stories here by Christopher “Bully the Kid” Bennett who has been writing for several publications, including Atomic Dogg Magazine, Reader’s Digest, and was featured on Pitbulls and Parolees on Animal Planet.

The dog show world is often viewed as this oddity of a realm. Full of weirdly clad, socially inept outcasts that have trouble fitting into normal society. After all who walks around in heavily knit sweaters with their personal pet covering the front.

Christmas gifts are easy, find a mug with the owned breed and wrap it away! If you find matching breed wrapping paper you have just hit the dog show-goer lottery, and will be rewarded with kisses from both owner and pet.

The truth is at first glance most would find dog show enthusiasts not only weird but weak. Not exactly dominant personalities, or the types that would be consumed with drama and high school bickering. They would seem to be the type of individuals that would avoid conflict at all costs and strive to not create a ripple in the social pond of societies doggie pool. Oh, would you be surprised!

The dog show world is full of more soap operas than daytime television in the 1980s. It is full of gossip, rumors, backstabbing, name-calling, and rivalries that would challenge any season of “Days of Our Lives”. The individuals involved often being larger-than-life characters that live drone normal lives during the week, but come alive as social event monsters during the weekend.

The lady whipping through aisles with the pack of Bichons is actually a dental assistant who is meek and mild-mannered in her workplace. At the dog show, however, she is a queen of the hounds and demands a wide berth. Her tone is sharp, her attitude demanding, and her glare icy. She is known to attack newbies and scoffs at any individuals that don’t find her word bond. It is easy to identify her as somebody in this world by how many smiles on her face and move quickly to the side when she passes. It’s been rumored that she has more pocket judges than actual pockets and her win-loss record matches the claim.

After the evident queens and kings, you of course have your followers, gossips, and antagonizers.

The followers are easily identified as they try to set up near the kings and queens, they usually have developed a nervous tick of sorts that requires that they nod and agree with all comments that come from the Queen or King’s mouth. Often times they may carry in crates, water bowls, or actually, scoop the poop from their false idols’ hounds. Anything to stay in their God’s good graces and not fall down amongst the casual show-goers who are ridiculed and shunned at every opportunity.

The follower never wins in a large way, but must win enough to stay part of the clique, if not prepare to be discarded and known as an individual with sub-par dogs. In a world where all that matters are titles and ribbons, sub-par does not cut the mustard!

The gossips are another group entirely! They are known to have dirt on everyone and are not afraid or ashamed to sling a fair amount in the direction of their rivals if pushed! They stay glued to dog forums, social media sites, and cell phones. The gossip lives to breathe dog show information, from who bred which dog to which bitch, to who has a son that was arrested for cooking meth in their bathroom.

Sometimes it’s a wonder that they even have time to show a dog between talking and listening to other gossipers! Yet they manage to show and remain somehow relevant in this insane asylum we call the show world. The gossips are entertainment in themselves and whether they are liked or despised they are listened to.

Now the dog show world also has its innocence. These poor helpless souls are referred to as newbies. Newbies are blind to the infighting, bickering, or pecking order of this world. They actually are merely there because they love their dogs and are happy with any color ribbon they can achieve with their pet.

This innocence is short-lived, however, as the rest of the show world pokes fun, laughs at, and bullies the newbies. Usually, a kind heart or two will help the newcomer, show them the ropes per se and all seems perfect in the show world… Until. You guessed it the newbie receives their first blue ribbon, or major! Once this happens the help is not so quick to come, the friendly smiles are replaced with icy stares. The ones who liked you before may very well become the newbies’ harshest critic! It’s a sink or swim world, and the sooner the newbie can doggie paddle the sooner they will rise to the top!

Now I’ve painted a pretty bleak picture of the world of dog shows. There are exceptions to every rule, and for every snooty, snobby person you meet, you are bound to meet another person that loves their animals as much as you do. There is a wealth of knowledge to be had at shows and a ton of experience at the end of those leashes! The key is to sift through the negatives to dig out the diamonds of positives and enjoy your time doing a wonderful hobby! Sometimes the truth is best served cold, but after your first bite, you may just realize that the savory middle was worth the icy crust!

Graciously written and offered by Christopher “Bully the Kid” Bennett and Vitamins For Pitbulls.