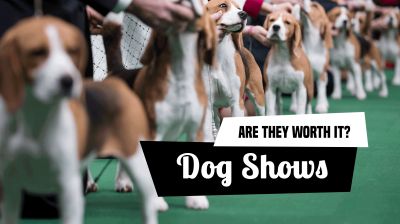 Since the first dog show was held in 1859, the activity has grown dramatically in popularity with tens of thousands of people taking part every year.

Is Losing Worth The Effort & Money?

Depending on who you speak to, dog showing is referred to as both a hobby and a sport. Some people see it as a day out. Others see it as a sport where they compete to see if their dog is the best. However, is it really worth spending money to enter a show, spend money on travel expenses when you know you’re not going to win? Again, this depends on who you ask in the dog world.

Throughout the years, opinion from the general public has changed. As animal rights have become more and more publicized, people have spoken out claiming that dog showing is cruel and dogs should not be made to “parade around to see which dog is the prettiest.”

Unfortunately, the majority of opinion given on dog showing is uneducated. All these people see are the dogs being run around the ring and being checked over by a judge. They don’t realize the rules the judges must adhere to and exactly what they’re looking for when it comes to judging dog breeds.

Essentially, when a judge is feeling over a dog and watching it move, they are gauging whether or not the dog is fit for the function it was bred for. Before dog shows, dogs were mainly used to assist people in certain tasks. Whether it was the Labrador retrieving game for the shooter, to the Newfoundland being sent in to rescue someone in the water. Dogs served a purpose and it was based on these jobs that breed standards were created.

As stated before, it depends on who you speak to in order to answer the question. After speaking to several exhibitors, these were their comments on the question asked. Please note that they asked to remain anonymous.

Yes, it is worth it. You’re learning to hone your craft. Watching and studying the competition. Showing how keen you are, which in turn, endears you to long term exhibitors. Learning to get an “eye” for a dog. Socializing. Making new friends and meeting old friends.

I think if people show ‘for a day out’ and don’t put the effort in, they should complain if judges are facey and keep awarding places to the same people. Goals change over time and with each dog. Wanting to win or get a better result shouldn’t be seen as bad. It is a competition after all.

To me, winning isn’t everything. I enjoy my day out but it is getting expensive. It is brilliant if the judge appreciates the dog I show as much as I do but you have to bear in mind that you are paying (amongst other things) for the opinion of the judge. It is disheartening when you hear the chatter around the rings that people know where the top honors are going to go, but that again is their opinion.

I feel that I put the effort in to present the dog as best I can and show him to his best advantage. I still enjoy my day whether he is awarded a placing or not.

I go for a day out to meet friends. It’s my me time. I’ve been unable to go to a show for over six months and feel a whole part of me has been stripped away. I no longer feel like me, that being said, the ultimate goal is to win whether that be class, breed, or group. But as I always tell my children, you learn nothing by winning all the time when you get things wrong and you learn from that and do a little better next time.

So, of course, it’s worth going if you’re not going to win a class. I’m ecstatic but I would rather come 3rd in a large class than 1st out of a class of 2, yes I can get disheartened if I feel dogs who have been placed above us are not in my opinion as good as mine. But it’s not an exact science.

Personal choice and preference play a large part than most judges like to admit. If you get angry or upset at a second-place then why on earth are you showing? Yes, it is a competition, but it’s also a hobby. Why would you take part in a hobby you don’t enjoy?

Yes. If like me, you start with a minor pup and you’re a complete novice, then learn together with your pup what needs to be done and turn up to the show and do your best, but more importantly enjoy it.

If you or more importantly your pup don’t enjoy it then find something else to do. I personally enjoy it and so does my dog. We have met some lovely and helpful people and the more you understand, the better you get and want to do as well as you can.

As yet, we don’t have an RCC or CC, but in my opinion, I take the best dog home with me and I wouldn’t be without him.

Is dog showing a hobby? For some yes, but for some, it’s very much a commercial enterprise to promote their kennels, their dogs, and the associated canine products that they may be selling, marketing, and promoting.

Showing dogs is certainly a good place to meet like-minded people and over the years I have some extremely good friends. There are also people, as in any walk of life that I don’t care to associate with due to their poor attitude.

Dog showing: Is it worth it if you know you’re not going to win? Yes, we can second guess, what dogs some, if not many judges will place. This comes with experience. Sometimes, the best dog wins, sometimes not. One pays for the judge’s opinion. I actually enjoy going under up and coming judges, who may not own specific breeds, but have a keen interest, have taken the time to attend breed seminars, and of course, have an eye for a good dog.

Rather than those judges who look at the wrong end of the leash to decide on their placings and don’t have the courage to look beyond the so-called ‘faces’.

As stated at the beginning of this article, it all depends on who you speak to about dog showing. Different exhibitors will have differing opinions and different levels of competitiveness. However, it is worth going to a dog show to gain experience and get to know what the judges are looking for. As with a lot of hobbies, practice makes perfect.

The one thing that the majority of exhibitors will agree on. No matter what the result. You always take the best dog home.

To know more about dog shows, read our chapter dedicated to dog sports.