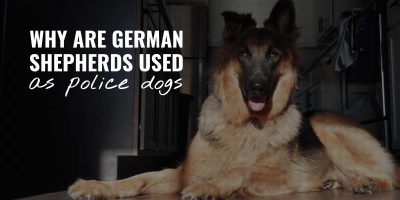 Due to the breed’s courageous reputation, it was soon commonplace to see German Shepherds as police dogs. Now, German Shepherds successfully apply their intelligence, strength, and obedience in several lines of police work. This includes suspect apprehension, narcotics detection, and search-and-rescue work.

Why do the Police Use German Shepherds as Police Dogs?

The German Shepherd is renowned for its strength, trainability, obedience, and high intelligence. This makes the breed ideal for several lines of work. These dogs are also highly active and confident with a keen willingness to learn. Furthermore, German Shepherds have no inclination to become friends with strangers immediately, which makes them ideal for protective roles. Also, German Shepherds have greater restraint over their prey drive in comparison to other breeds. As a herding breed, the German Shepherd has good impulse control and analyzes the best approach to a situation. Lastly, German Shepherd dogs are lighter than other breeds that have a history of working as police dogs. This is important, as police dog handlers must be able to lift and maneuver their canine partners in the field.

Why Do Police Use German Shepherds and Not Pitbulls?

There are several reasons why Pitbull-type breeds are not commonly seen as police dogs. To begin with, Pitbull-type dogs are often extremely friendly, even towards strangers. Aggression towards humans is highly uncharacteristic of the breed. Secondly, Pitbulls have a high prey drive. This makes them more likely to become distracted by small animals than other breeds. Consequently, this makes some pit bulls less likely to analyze a situation before reacting to it when in the field. Pitbull-type dogs are also known to exhibit more aggression towards other dogs, as a result of what they were originally bred for. Lastly, the coat of a Pitbull-type dog is short and thin. This makes dogs of this breed type less suitable for work in the cold. The German Shepherd, on the other hand, has a double coat, providing two layers of fur that allow extra insulation.

These dogs are usually a better fit for roles like search-and-rescue, therapy, companionship, and athletic sports. However, the negative factors do not make pitbull-type dogs completely unsuitable for police work! Police departments across the USA are adopting pit bulls from animal shelters in favor of buying and training more expensive pure-bred dogs. Using their keen sense of smell, rescue pit bulls are successfully working to detect narcotics, explosives, and missing persons!

Why Do Police Use German Shepherds and Not Rottweilers?

During World War I and World War II, the Rottweiler saw use as a messenger, draught, and guard dog. Proving themselves as a valiant and loyal breed, their reputation allows them to continue their work today. Modern Rottweilers boast a good nature, exhibiting devotion to their partners as well as an eagerness to work. Similar to the German Shepherd, Rottweilers are not quick to trust strangers – an overly-trusting nature towards strangers could compromise the breed’s effectiveness in the field.

Why do Police Use German Shepherds Instead of Dobermans?

Despite being highly intelligent and loyal, the Dobermann is not commonly seen in police work in the USA. Perhaps the most important reason is the breed’s lack of an undercoat. Dobermanns have a single-layer coat with short hair, in contrast to the double-coat of the German Shepherd. A double coat acts as an insulator, keeping dogs warm in the cold and cool in the heat. This quality makes the German Shepherd better suited for work in extreme temperatures than Dobermanns. Furthermore, the Dobermann reasons internally before taking action. If these dogs encounter a problem, they will take a new approach the next time they encounter it. A German Shepherd, on the other hand, is more likely to use the same approach that they were taught.

State-level Indian police forces sometimes use Dobermanns as police dogs today. For example, a female Doberman named Tunga uncovered over 50 murders and 60 thefts in Karnataka, India. This included one murder, where she ran over 12 km to apprehend the murderer. In the USA, the Dobermann proudly works as a military dog, guard dog, or personal defense dog. In fact, during World War II, the Dobermann was the official war dog of the USA. These intelligent and active dogs also make excellent athletes, excelling at several canine sports!

What Police Work do German Shepherds Excel At?

The German Shepherd is a versatile breed, able to fulfill several working roles. Amongst the most common are suspect apprehension, scent detection, and search-and-rescue roles.

The majority of dogs used for suspect apprehension are German Shepherds and Belgian Malinois. A fully-trained German Shepherd is capable of bite forces exceeding 238 psi and is capable of causing severe damage. While strength is a desirable trait for this line of work, it is more important that apprehension dogs will stop as soon as their handler orders them to. For this reason, the breed must be intelligent and responsive to vocal commands.

German Shepherds are well-suited for sniffing and detection work. With their keen sense of smell and willingness to work regardless of distractions, German Shepherd dogs are adept at narcotic, explosive, accelerant, mine, and cadaver detection. These dogs are so prized for their scenting abilities that Zayaqui, a narcotics detection dog, is on display at the Museo del Enervante in Mexico. Zayaqui was responsible for the seizure of over 8,000 lbs worth of illegal drugs, thanks to their incredible scenting abilities!

Search-and-Rescue (SAR) dogs are specially trained to detect human scent. German Shepherds are one of the many breeds used for SAR work. SAR dogs must be able to work despite distractions and have a keen sense of smell. These dogs must also be non-aggressive towards other dogs and humans. German Shepherds fill all of these requirements with ease. In this line of work, a German Shepherd may fill the role of a trailing dog, air scenting dog, tracking dog, disaster dog, or cadaver dog.

Do the Police Use Female German Shepherds?

With continued development in police training techniques, female police dogs are likely to become more common. Both male and female police dogs excel at their work, but with current training methods, their different talents and qualities are best applied to specific areas of work.