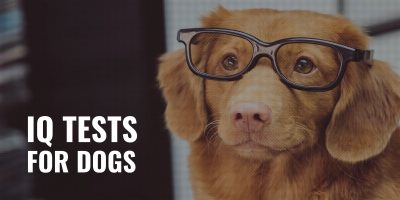 While your dog’s intelligence will make no difference to how much you care for them, IQ tests for dogs can help you to decide on a new pooch.

Dog IQ tests indicate traits of trainability and temperament. This not only helps prospective owners to choose a dog that’s the best fit but can also give them an idea of what behavior to expect from their new pet.

What are IQ Tests for Dogs?

Are IQ Tests for Dogs Accurate?

It’s important to know that these tests are not always accurate as dog intelligence is highly subjective. While your dog might not perform well at problem-solving or reasoning, they might possess other talents that show how smart they are. Additionally, obedience is not necessarily a sign of intelligence or lack thereof. While it may be unfair to claim that IQ tests for dogs are completely accurate measures of canine intelligence, they do still have some uses. They help owners to evaluate their dog’s problem-solving skills, me and memory, which can give an overview of their smarts.

To measure a dog’s intelligence, we must first address the two basic varieties of intelligence. The first type is “instinctive”, which inherent to a breed of dog. This is the kind of intelligence that makes Border Collies great at herding sheep, and terriers good at hunting small animals. The other type is “adoptive” intelligence. This is your dog’s ability to learn. This includes learning to perform specific tasks, socialization, and comprehension of language.

But, just as a human who excels at playing a musical instrument is no better nor worse than a human who can solve advanced equations in their head, a dog who is stronger in adoptive intelligence is no better or worse than a dog who excels in instinctive intelligence. Thus, when giving your dog IQ tests, you should bear in mind that they may have natural skills that the tests do not take into account.

Poodles are regarded as the second most intelligent dog breed. The Poodle is skillful in many sports and working roles. Agility, obedience, tracking, assistance, and herding are just a few of the roles they can easily fulfill. Poodles respond very well to training and commands.

German Shepherds are usually listed as the third most intelligent dog breed. The breed was developed for herding sheep. Since that time, however, German Shepherds have become recognized for their intelligence, trainability, and obedience, and now work in many different roles. Police, military, search-and-rescue, and disability assistance work are just a few of the main roles these dogs can work in.

Certain breeds are claimed to be smarter than others due to their obedience. However, the willingness and ability to learn commands is not the only measure of intelligence. Other breeds, like sighthounds and sled dogs, demonstrate their intelligence in other ways.

Below are some easy tests you can do with your dog. These tasks will help you to evaluate your pet’s ability to learn, reason, and solve problems. A scoring system is also given. These tests are adapted from Hill’s Pet Nutrition.

Test 1: Toss a Towel on Your Dog's Head

The first task is simple. Place a large towel or blanket over your pet’s head. This test should provide some insight into your dog’s problem-solving abilities.

Give them three points if they figure out how to get free within fifteen seconds. If it takes thirty seconds to figure out, award them two points. Did your dog get confused and not free themselves for more than thirty seconds? That’s one point.

This test provides insight into how your dog solves problems. Does your canine genius shake the towel off of their head? Pull it off with a paw? Or do they just sit and accept this treatment? The quicker your dog responds to the problem, the better. At the same time, failure to remove the towel from their head doesn’t necessarily mean that your pup isn’t smart! A highly tolerant dog might simply let you place objects on their head because they want to please you.

Test 2: Hide a Treat Under a Paper Cup

The second task involves you grabbing a tasty treat and three cups. Three buckets can also be used if preferred. Whilst your dog watches, hide one treat underneath one of the cups. You probably already know how this goes – mix up the cups so that it’s harder for your pup to locate the treat.

This test provides insight into your pup’s reasoning and memory skills. If your dog excels at this exercise, it might indicate that they have good problem-solving skills and can remember things well. This task serves as an example of object permanence, too.

Test 3: Let Your Dog Find a Treat Under the Couch

The third task requires a piece of furniture and a treat. Place the treat underneath the furniture just within a paw’s reach. Make sure to keep this task fair – can your dog reasonably fit a paw or their snout inside the gap?

If it takes your dog under a minute to reach for the treat, using only their paws, award them three points. Did they try to fit their head into the space first, and then use their paws? That’s two points. If they gave up entirely, award just one point.

In theory, this test gives insight into a dog’s problem-solving skills. The problem is that the treat is difficult to reach, and they need to figure out the best way to get to it. If your pet fails this test, don’t be too disheartened. There are many reasons why your dog might not be able to figure this task out, so don’t be quick to discredit your canine’s genius potential!

Test 4: See if Your Dog Takes a Cue

For this test, all you need is your dog’s leash. Do you take your dog out for a walk at a certain time of day? Pick up the leash at a different time. What happens?

Give your dog three points if they immediately make the connection and show excitement. Award two points if your dog only responds once you’ve walked to the door. Finally, it’s one point if your dog seems to have no clue what’s going on.

In theory, this quick test shows if your dog has the ability to retain associations. In psychology, this is called classical conditioning. The downside to this test is that it doesn’t take into account a dog’s personality. While a dog might understand that picking up the leash means it’s time for a walk, it doesn’t always mean that they will be excited about it.

Does your dog have a favorite spot to lounge in the room? If so, send them out of the room and then rearrange some furniture. Let your dog back into the rearranged room. Do they go to the usual spot right away?

If your pup goes right to the favored spot, give three points. Investigating the room before finding the spot allows for two points. One point can be given if your dog fails to go to the spot.

This test evaluates your dog’s reasoning and memory. Your dog should be able to reason that, even though the furniture has moved, they can still access their favorite resting place. This is an example of object permanence. At the same time, don’t be too discouraged if your pooch fails this test. Your dog might not understand that you want them to find their favorite spot. They might also simply not wish to go to the spot at that time.

It’s time to add up all of your points!

Got any questions about IQ tests for dogs? Feel free to consult our Frequently Asked Questions section for more on dog IQ tests.

Do Dogs have an IQ?

Measuring a dog’s IQ is not as easy as just taking a test, they do not have an IQ like ours. Unlike people, dogs can’t simply be given questions to answer – instead, we must find other ways to explore their intelligence. We must also take into account the different types of canine intelligence. While IQ tests for dogs are not always accurate, it is still possible to identify which dog breeds are the most intelligent.

IQ or Intelligence Quotient is the name given to a test that measures intelligence. IQ tests were originally developed for humans. Over time, behaviorists have found ways to apply IQ tests to other species like the domestic dog.

How do you Test a Dog's IQ?

Although the tests are not 100 percent accurate, it’s possible to investigate your pup’s intelligence at home. You can test their intelligence by giving them problems to solve, objects to remember. and associations to react to. The tests don’t have to be complex. To recap the types of IQ test:

Is a Dog Watching TV a Sign of Intelligence?

Dogs are intelligent enough to react to the television and this is a sign of higher intelligence. A study published in Animal Cognition found that dogs are able to identify images of other dogs amongst images of other animals using vision alone. A similar article from National Geographic suggests that dogs are intelligent enough to recognize on-screen images of animals as they would in real life. They can also recognize dog sounds from a TV. However, the way a dog watches TV is quite different from how a human would.

Instead of sitting still, dogs engage with TV in short bursts. They will often approach the screen to investigate and walk repeatedly between the TV and their owner. Essentially, they are fidgety, interactive viewers. Dogs have only recently been able to watch TV like humans. This is because modern TVs have a higher frame-rate than older TVs. For dogs in the past, watching a TV was like watching a strobe light.

What Dog Breed has the Highest IQ?

When discussing breed intelligence, it’s important to recognize that obedience is not the only sign of canine smarts. Other breeds display intelligence in different ways. Just because your pooch isn’t on the list, it doesn’t mean they can’t be smart too!

To conclude, IQ tests for dogs are simply a fun way to measure your pup’s smarts. We already know that our furry friends are intelligent, but it’s undoubtedly fun to explore just how far our pets’ abilities can go.