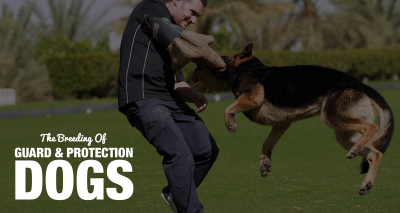 Dogs have been used to guard and protect for centuries and over this time selective breeding has produced dogs tailored to specific tasks. The list of dogs used to guard is almost endless as virtually every country has bred dogs to suit their specific conditions.

In many cases, the guard dog was developed to protect livestock such as sheep or cattle and were often bred from hunting dogs. These dogs were also used to protect their owner’s property from dangerous intruders. As a result, the dogs used were usually large and intimidating to look at and were aggressive to strangers. For example, a typical guard dog is a Caucasian Ovtcharka which is assertive, strong-willed, and courageous. Unless properly socialized and trained, the Caucasian Shepherd may exhibit ferocious and unmanageable tendencies.

A clear distinction, however, must be made between a guard dog and a fully trained protection dog. Whilst a guard dog is intended to be aggressive to strangers or predators, a protection dog is essentially neutral. In other words, it works on command only. The dog will only attack on command and will release on command. It does not make its own decision to attack as is the case with a guard dog but is under the complete control of its handler.

Over time specific breeds of working dogs have been selected to become protection dogs such as the German Shepherd or Belgian Shepherd. These dogs are highly intelligent and are quick to learn and most importantly are strong, quick, and athletic.

The German Shepherd is probably the most well-known protection dog used extensively by the police and military all over the world although even within the breed there are differences. In particular, as a result of the Iron Curtain, significant differences occurred between the German Shepherds bred in the West and those bred in former East Germany and the Czech Republic. In many cases in West Germany, the dogs were bred for sport whilst in the Eastern bloc they were bred as working protection dogs.

These differences are clear in both appearance and temperament. The Czech dogs were bred from East German (DDR) lines and are much darker in color compared to their West German counterparts. They were also bred to be larger and more muscular and generally more powerful as they were used as border guard dogs by the military and police. As a result, they also have a higher working drive and are prized by police forces particularly in the USA.

Unlike the German Shepherd, the Doberman was bred specifically as a protection dog in Germany by Karl Friedrich Louis Dobermann in the nineteenth century. As a tax collector, a hazardous job in those days, he required an intelligent, watchful, sharp, and brave dog. Opinions differ as to the original makeup of the breed but there is no doubt he was successful in breeding the required characteristics.

The Doberman, therefore, was from the outset a working dog although its short coat makes it more suitable to live in a home rather than kennels. However, they are naturally suspicious of strangers but not aggressive. In addition, they are particularly affectionate which belies their reputation.

The third category of a protection dog is the family protection dog. These are the type of dogs trained by Protection Dogs UK, and selected from the best breeds of working protection dogs. The decisive factor for their selection is their temperament and in particular their behavior around people, particularly children, and other animals. They must be a typical family pet, affectionate, neutral to strangers, and particularly good with children.

Clearly, these are special dogs, and not all working dogs can attain this level of obedience so they must be rigorously selected and equally rigorously trained. Protection Dogs UK has become an expert in both the selection and training of family protection dogs. Their experience has shown that Dobermans and German Shepherds particularly those with Czech working lines fit their demanding requirements. They are able to select those dogs which as well as being affectionate have the necessary protection abilities.

Protection dogs, and particularly family protection dogs, are now the most effective deterrent to criminals, and police forces are recommending them as the best means of safeguarding families and property. It is, however, essential that only the very best breeds are used and trained by experts.