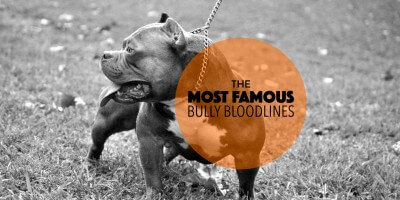 The American Bully is a relatively new breed as it was founded in the 1990s in the United States. Because of the newness of the breed, the American Bully breeders are somehow going it various directions yet, some of them are extremely influential in the community and pave the way for a unified and standardized American Bully dog.

In this article, I wanted to provide you with the most famous and influential American Bully breeders so you get familiar with where the overall breeding program is going. This knowledge can help you learn more about these bloodlines, the famous specimens and perhaps, help you decide your next purchase.

Dog breeders come and go, especially with such a competitive breed as bullies, but these breeders have been around for years if not decades and their dogs are here to stay. Check our dog breeding guide out; it explains how to master canine genetics and make it happen in dog breeding.

Here are some of the most influential and famous bully breeders in America. Make sure to read further modern Bully content in our HUGE Bully Bundle.

Considered as the principal founder of The American Bully breed, Dave Wilson is the owner of Razor’s Edge Bullies along with his friend Carlos Barksdale. Still, at a time when Bullies did not exist, these guys specialized themselves into breeding game dogs.

Dave had to move and landed in VA, where he started Razor’s Edge Kennels with the breeding of top-quality American Pitbull Terriers. At this time, Dave was absorbing as much breeding and genetic knowledge as possible. Soon though, there was a ban on pitbulls and Dave has in mind the development of a different dog, more bully and less terrier.

Dave Wilson met with Ron Smith who knows several breeders from the AKC and UKC, and Dave was starting to prospect dogs and breeders with a physique he would like his pitbulls to lean towards. In Kimmar Kennels he found the physique and build he was looking for and dived deeper into canine genetics to start his own bloodline, of this new type of dog, soon to be known as the Razor’s Edge Bully Bloodline.

By breeding various combinations of breeds and bloodlines, Dave eventually got his large-boned, blocky-muzzled, large-headed, shorter and wide-chested style for his dogs. These physical characteristics will eventually become the signature traits of the Razor’s Edge bloodline of American Bullies. Razors Edge bullies tend to have more of a classic pitbull look in a shorter, stockier version. Razors Edge’s Bullies are often referred to as the cleaner or classic look compared to the other bully bloodlines.

Razor’s Edge’s bloodline has some of the most popular American Bully studs including:

Because of the influence of Razor’s Edge’s Champion bullies, this Kennel must be followed closely as many breeders chase that ideal bully. Razors Edge Bloodline is one of the few that can set trends and dynamics within The American Bully world.

Founded by Richard Barajas, the West Side Kennels started the adventure in 1997 after buying the 7-week old The Notorious Juan Gotty from Tony Moore, owner of Grey Line Kennels, for an amount of $1,300. That purchased occurred after Raider, his original sire passed away.

Although more recent than other kennels who founded the breed, Gottiline Bullies have their own look leaning towards a bulky and stocky appearance. This is because the direction taken by the Gottiline’s breeding program is clear: their American Bullies must showcase muscular mass, a broad head to house powerful jaws, and infuse with bulldogs to get that bulky look.

Westcoast Gottiline’s bullies may look intimidating and built for weight-pulling sports but they also have a gentle temperament. The breeding program is strict on these mental characteristics.

Many external bloodlines are now related to The Notorious Juan Gotty and Gottiline. These related lines have different appearances, including the Kingpinline Kennels or Mikeland Kennels. They both counted Juan Gotty in their founding stock.

Today, WCG has started another bloodline called the Ace-Line. Our bloodline WCG Ace-Line is based on one of the greatest Gottiline legend going by the name of Mr. Consistent “Black Ace” and his carefully selected offsprings. They will be linebreeding to keep the pedigree strong and give a smaller design to the bloodline.

Founded by Fabian Chichester who based the Remyline Bloodline on Lowjack’s Remy Martin, a near-to-perfect Razor’s Edge bully. Remyline came into being in 2003 with the birth of Remy Martin who was produced by Byron Johnson.

The bloodline has been faithful to its iconic founding Sire, Remy Martin, and has a lot of American Pitbull Terrier blood. Generation after generation, offsets have been bred back to Remy Martin in order to fix specific traits and characteristics. These dogs remain extremely consistent and offer very little variations in terms of appearance. Unlike Dave Wilson who used a number of different Pitbulls to develop the Razor’s Edge bloodline, Fabian used that just one dog to create that Remyline signature.

The most famous specimens in this line are those who look as closely as possible to the founding Remy Martin. This prolific stud with over a thousand registered offsprings had a rather thick frame and bone structure, heavy in density. Remy Martin has a famous badass stare and a blue-colored fawn.

Due to its popularity, many international kennels are queuing up just to have a chance to add Remy’s blood into their own pool of American Bullies.

Gary Moore and his brother, Tony Moore, own Blue Star Kennels who originated the Greyline bloodline of American Bullies and Pitbulls. Gary said in a video interview that he is not really breeding dogs for money, he has a full-time job and only breeds dogs that will bring something to the table, and make the American Bully breed move forward.

Because Gary and Tony Moore breed rarely, their dogs create a movement in the community and from their scarcity their popularity was born. Today still, you are lucky if you own an American bully with some original Greyline blood.

The Greyline look tends to provide the dogs with a large square head, a short muzzle and rather wide shoulders and chest. They do indeed look powerful and each breeding has been carefully thought through in terms of genetics to fix these traits so particular to the Greyline bullies.

Gary Moore does speak frankly and admitted that he was laughing at the new breeders on the Internet, buying two Greyline or two Razors Edge dogs and breeding them under a new bloodline label. Too many have as a final goal to label their dogs with a brand new banging bloodline name but forget what breeding is about: genetics and a well-trained eye.

Some of their most famous dogs are Raider, Raider II, Soulja Boy, Monster and Gotty. Some of them stayed under their ownership but others have been sold to other kennels.

The Greyline pitbulls and bullies are all resulting from carefully studied breedings, they are not just famous names put together. This is why these brothers are followed by the community as they actually know what they are talking about. They have been breeding American pitbull terriers before the American bully even started. Their experience with outcrossing and line-breeding is legendary in the community.

Although Kurupt Blood is commonly known as a Bullypit breeding program, they are also commonly described as Bully breeders. They are specialized in XL, XXL and Giant American Bullies. Many will discard these dogs as being authentic American Bullies but because the breed is so new, we thought we had to add Kurupt Blood here as they influence the bully world by encouraging bigger dogs, much bigger dogs. We refer to these “bullies” as freakish.

Their most famous freakish American Bully specimen goes by the name of Kurupt Blood Panic, or just Panic for the connoisseurs. With its 27-inch head, Panic is famous world-wide and his semen has been sought-after at incredible prices. It seems like extreme breeding attracts a lot of people as we saw it with Hulk from Dark Dynasty K9 and here with Panic from Kurupt Blood.

Besides kennels that founded or initiated The American Bully, many breeders have started their own bully breeding programs and have earned a valuable following thanks to their dogs’ amazing features.t

These bully breeders include:

Other kennels could figure on the page because they are extremely influential in the APBT & BULLY world(s) but they are not actually breeding American Bullies, but pitbull mixes. An example would be Dark Dynasty K9’s dogs.

These are the most famous and influential American Bully breeders there have always been. This is a young breed and the role these guys have played is humongous.