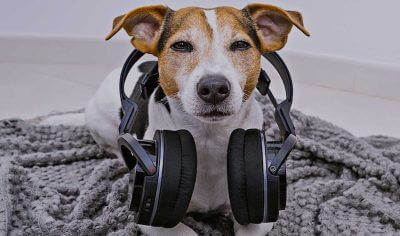 Are you looking for music dog names? If you would like to name your puppy after a famous musician, special music genre or get an iconic name inspired by music, then our list will suffice all of your needs!

From the classics like Mozart and Beethoven to the most recent and trendy singers and songs, you will find everything you need in our list and guide.

Worry not, because we are also going to give you direct suggestions, so you can get inspired and find the perfect name for your pup. Keep reading, and if you have any questions, just comment below and we will get back to you!

And… we’ve got dozens of puppy name idea categories for you to continue your search!

Here are several options of music dog names for you to choose from:

Since the world of music is rich in singers, we have used their names as sources of inspiration for creating this post. Below, you will find plenty of options, so you can analyze each one and pick the one that better suits your pet.

Is your dog a free soul and you love the good rock? Then you could call your dog Lennon, as in John Lennon. It would be a good name for dogs with long coats like the Afghan Hound. We like this music-inspired puppy name a lot. And most people will easily understand the reason behind the name of your pet, apart from sounding cool.

Do you love rock, soul and blues music? Then here we have the perfect name for your dog, Joplin, as in Janis Joplin, one of the most prominent singers and songwriters from this genre. Apart from having a good meaning, it is short and original.

Are you a fan of rock and superb guitar skills? Then you will love our next suggestion, Hendrix. Inspired by Jimmy Hendrix, it is a great name if you are his fan. Furthermore, since the name is short and straight to the point, it will easily connect with anyone who hears it.

Are you looking for a fresh and short name? Then look no further than Jovi, as in Bon Jovi. If you are a fan of great songs like “It’s my life” and “Living on a prayer”, then this name will be ideal for your pet!

Finally, you could also name your dog Ozzy, as in Ozzy Osbourne, in case you are a fan of metal music. First, the name is iconic, and second, it is short and sounds cool. Those are the reasons why we suggest it to you.

The world of music is also full of great bands and songs. In honor of them, we have picked several dog names inspired by all-the-time great bands, so you can choose the one that better represents your pet.

In consequence, this is going to be the most extensive section from our guide, since we are going to give you names inspired by songs, but we will also talk about certain traits that would make your pet an ideal candidate for such names.

If your dog is robust and strong, and you are a fan of Pink Floyd, then you could call it Brick, as in Another Brick in the Wall, which is one of their greatest songs. As you can see, with this name you can summarize different traits of your pet, all meanwhile you include your passion as well.

Is your dog full of energy and is it always ready for action? Then you could name it TNT, as the great song by AC/DC. If your dog is as explosive as dynamite, then here you have an exceptional name for it. You can bet on it that not many dogs will have the same name, and in consequence, yours will be the star from the group!

Is your dog tranquil, docile and a total sweetheart? Then you should name it Angel, as the song by Aerosmith. If you are a fan of the band or rock in general, then chances are you have heard it. Therefore, it makes perfect sense to name your dog like that in case it has such traits.

Does your dog feel like a new son? That is the case for many families for who their dog becomes a member of their family, and in that case, you could name it Baby, like the popular song by Led Zeppelin. You can bet on it that people will like the history behind the name of your pet.

Is your dog courageous and strong? That is the case for breeds like the Bloodhound and the Great Dane, and therefore, you could call yours Trooper, a name based on the powerful song by Iron Maiden. It makes a strong statement, and in addition, it sounds cool and bold.

For those looking for an exotic name, you could call it Hangar, as in Hangar 18, the song by the metal band Megadeth. If you are a fan of heavy metal, and you think your dog has the character for it, then you can bet on it that it will match the name perfectly!

Now that we have arrived at the end of our list of music dog names, which have been accompanied by our guide and tips, now the ball is in your court. All you need to do is to review our list patiently and pay attention to our advice, so you can pick the best name for your pet. The one that truly resembles all of its traits.