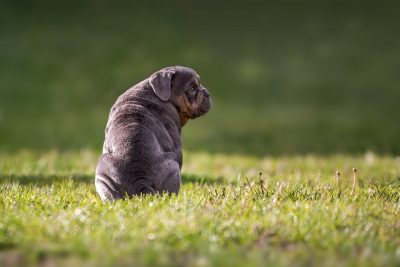 Looking for cute dog names for your little and adorable puppy? Then it is your lucky day because at Breeding Business we have created a list with over 130 names for your cute dog.

To bring you the most complete compilation, we have investigated different sources, which include foreign languages, mythology, shows, movies, cartoons, books, famous characters and more.

Therefore, these cute names for puppy not only sound adorable and lovely but also carry a meaning, which is exactly what you need to bring to your pet.

Our world is amazingly rich in languages, and therefore, it is fantastic how many words sound cute and carry a good meaning.

For example, you have Agustin, which is a Spanish name. It is one of the cutest puppy names, and for instance, it would suit a Bichon Frise perfectly. The same would go for a Pomeranian, or in fact, any other breed.

Now we leave Europe to arrive in Hawaii, to find our next suggestion: Alani. A cute Hawaiian name that means orange tree. For instance, it would be ideal for a red-coated dog like an Irish Setter or Redbone Coonhound. Furthermore, it’d also be an excellent name for a Tibetan Mastiff. It can be used for both genders.

Now we come back to Europe, to find our next suggestion: Charlotte. It’s an exquisite and adorable French name for a female puppy because it means petite. It’d suit a toy Poodle perfectly, but in fact, it’d be ideal for many other cute small white dog breeds, even including a Bichon Frise.

Now it is time to get cold to find our next idea: Kaba. An adorable Alaskan name. It is not common, and therefore, it will bring your dog a name that outstands from the rest. Evidently, it’d be a good choice for Alaskan breeds like the Alaskan Malamute and the Alaskan Klee Kai.

Now it is time to leave to Asia, to find the final suggestion for this section: Akira. A Japanese name for male puppies. One of the best cute names for puppies because it means “bright and clear dawn”. Therefore, it’d be an excellent choice for white-coated breeds like a Bull Terrier, Maltese Dog, Great Pyrenees or Komondor.

We start this section with one of the mightiest – yet cutest – names for a puppy, Apollo. The Greek god of sun, light, knowledge, healing, and archery. One of the most complex and important deities from the Olympus. Still, it is a remain that screams cute as well. The perfect mix between lovely and powerful.

Of course, we cannot advance without naming the all-almighty and most powerful name of this section, Zeus. The important Olympian deity, yet, its name is very cute and suitable for any dog breed. From a small Chihuahua to a big Dogo Argentino, it is multi-purpose and fits the bill perfectly, because it is adorable!

Now it is time to leave Greece and depart to Hawaii, to meet our next proposal: Pele. The Hawaiian goddess of fire and volcanoes. Once again, a very powerful deity with a cute and lovely name, which makes it ideal for this listing.

Now let’s fly to Egypt, to find one of the best cutest puppy names, Ramses. Not a deity in fact, but it means “son of God”, which is enough to include it in this listing.

Here are several options of cute dog names for you to choose from:

You have already seen that our list brings you many different suggestions. Nonetheless, we have a lot more in store for you, and here you have a few other examples.

For instance, you could name your dog Zelda, like the mythic Nintendo character. A good pick for a cute dog with the soul of an adventurer and warrior.

Following the Nintendo line, you could opt for Yoshi, the adorable character of Mario Bros.

Finally, you could also resort to colors like Turquoise, which sounds cute and makes an ideal name for a blue-eyed puppy.

Now that we have shared the best cute dog names, it is time for you to choose. It is not hard in fact. Just study our list patiently, follow our suggestions and see which one identifies your dog the best.

Take a look at our complete list of cool dog name ideas!