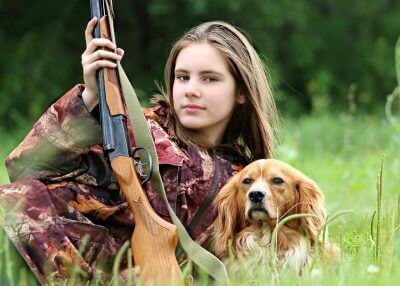 Are you looking for hunting dog names? If your puppy has the blood of a hunter, then you are in the right place. Here you will find over 150 ideas that will match the temperament, personality, and essence of your pet.

They are ideal for hunting dog breeds like the Barbet (exceptional water dog), the Bloodhound or the Boykin Spaniel, just to give you a few examples. The list very large, however, thanks to our recompilation of best dog names for a hunter, you will find exactly what you need.

Firearms and hunting go hand to hand, and therefore, there are the ideal source of inspiration for naming your little hunter.

A proper hunter dog will be an indispensable asset in any mission, and if you want to make your puppy become one, then you can name it Ammo, because it’s the name that such dogs receive.

If you want a name that screams hunting and actions, and at the same time breaks the mold of all conventions, then you could name it .38 Special. A powerful center-fire revolver especially designed for heavier-duty.

There are many ways to skin a cat, and just like you can use a gun to hunt, you can also do it the old-fashion way with a Bow and an Arrow, which happen to be popular hunting dog names. They have been used for thousands of years to fulfill one of the most exciting and primordial activities for the men of ancient.

Beretta is one of the world-leading firearms manufacturing companies in the world, and such an exquisite name is also a great choice for your female hunting dog. It sounds cool and gets the message across, your puppy is designed to go after the prey!

If you liked our previous suggestion, but you have a male puppy, worry not, because you can choose Benelli. It’s another firearm manufacturing company from Italy. The name is compelling yet sophisticated and iconic. Exactly what your pet needs.

Another cool name would be Buckshot, the most powerful type of shot. It’s majestic in its strength and precise, just like your puppy. It’d be an amazing name for a big hunting dog like the Weimaraner or the American Foxhound.

You also have an excellent suggestion, Derringer. A subtle and powerful handgun, which would be a great name for breeds like the Beagle, Boykin Spaniel, Nova Scotia Duck Tolling Retriever or the Brittany Spaniel. These are smaller dogs, however, their talent for hunting is undisputed. Therefore, they’re as powerful and effective as a Derringer at the hour of getting the job done.

You can also find tons of inspiration in the animal kingdom, for it is full of great hunters. A good example would be Eagle, which as you can easily tell, is one of the most versatile hunters in the wilderness. It’s precise, powerful and effective, just like you want your puppy to be!

For a big and imposing dog breed, you could opt for Bear. You already know what they are, and perhaps you also know that they are fiery hunters, the same essence that your puppy should share.

You could also name your dog after its cousin, the Coyote. A wild dog that is also a smart and efficient hunter, and therefore, it would faithfully represent the real essence of your puppy.

Like our previous suggestion, you could also choose Dingo, which is a wild dog from Australia. It would be an ideal name, especially if it resembles this animal in some way, appearance-wise.

There are lots of appellatives that hunting dogs receive, and therefore, they can make great names on their own as well.

For example, if you have Greyhound, which is one of the fastest hunting dog breeds in the market – especially bred in the Middle East to capture fast preys like deer and hare – you could name it Blaze. It’s a typical name that racer dogs receive. On the other hand, you could opt for Dash or Bolt, which mean exactly the same. It’d also be ideal for other fast hunting dogs like the Saluki and Afghan Hound.

You could also name it Scout, which is a popular name for tracker hunting dogs. Here we could name a few example: the German Shepherd, the Bloodhound and the Malinois.

Caliber is another cool suggestion, for it is widely used for powerful hunting dogs, the kind that seems to never tire and always go after the prey. No matter what.

Here are several options of hunting dog names for you to choose from:

Now that you have a complete list of the best hunting dog names, it’s time for you to sit down, ponder and choose the one that truly represents your puppy. We’ve also given you suggestions on which names suit each breed the best, so the ball is in your park now!