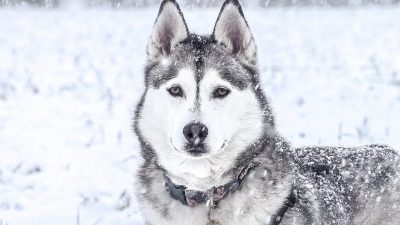 Husky dogs have a very unique and beautiful appearance that makes anyone who sees them immediately recognize them. Therefore, if you have this kind of dog, we have good news for you because we have made a list of the best Husky dog names, so you can choose the perfect one for your pet.

It’s true that there are many breeds of huskies, but they all are called this way because of the geography where they are from and the characteristics that make them similar.

Also, most of them were originally sled dogs that became pets over the years.

Husky dogs don’t only have expressive blue eyes and a gorgeous black and white coat, but also a personality that combines sweetness and strength, so the reasons why they are so loved are obvious.

Therefore, we have had many sources to take inspiration from, and have finally come out with a long list of names for your husky dog, and some categories with special suggestions, so you can pick easily the perfect name for your dog. Let’s start then!

These dogs can endure the toughest climates and conditions, so it’s not a surprise that we have taken this fact to find names inspired by nature.

Therefore, you can name your dog “Storm” or “Blizzard” to show how powerful and strong they are.

If you have a female dog, then you must consider this name: Winter. It sounds adorable and accurate for it since it must love this season because of the cold weather. Also, you can perfectly picture the image of any husky dog with this name, right?

Next, we have the name Nova that refers to a star that increases its light. So, this name is perfect for female husky dogs because they have many striking traits that make them stand out from other breeds.

Finally, we think that Wolf is also another good name since husky dogs have many resemblances to this animal.

Here are several options of husky dog names for you to choose from:

Based on that, Igloo can be a good alternative, because it shows that even they are built of snow and keep people warm.

Husky dogs are extremely athletic and agile, so a good name to give it is Axel. Do you have any idea what this word refers to? If you’re fond of ice skating, you will know that this is one of the oldest and most difficult jumps. This actually matches really well the physical capabilities of these dogs but remember that it is only for male ones.

To match the idea that husky dogs are used to traverse icy terrain, Glacier is another good name to give your dog, whether it if female or male.

Is your female dog independent, loyal, and brave? Then, you must consider the name Mulan since those are the most outstanding characteristics of this heroin and princess.

Do you want to give your male dog the name of a dark character? Then, one option is Kylo, the major antagonist in the Star Wars franchise.

Then, you have Rocky, the iconic character played by Sylvester Stallone. This name is perfect for these dogs that are strong and have muscular bodies.

And what if you have a female dog? If she has a bold personality, a free spirit, and is fearless, you can choose Moana since this is the personality that this character has, too.

Finally, Logan, which the name of Wolverine, is the ideal name for male dogs that are fierce, loyal, and loving.

Is your female dog an Alaskan Malamute or an Alaskan Husky? Then, the perfect name to give it is Alaska, since it has its origin there. We even have a list of Alaskan names for pups! The same if you have a female Siberian Husky. You can give it the name Siberia.

Those names above don’t seem innovative and charming to you? Then, what about Polar for your dog? This is an easy name to pronounce and is also very cute.

If you have a male dog, then another appealing option is Alpine. It’d be a great name for a big and tall dog like the St. Bernard. It’d be a superb name, because, on top of resembling a towering presence, it sounds soft and sweet enough, which is a top match for its personality.

Due to the fact that husky dogs often look imposing, Alpha is an excellent name idea for both female and male dogs because this term refers to the dominant dog in a pack.

Chief is another good Husky puppy name since it is a short and easy name to pronounce, and it has also a strong meaning. However, take into consideration that this name is for male dogs.

Ace is the perfect name to give your male dog that is skillful, smart, and it has outstanding capabilities. It means an expert or master.

Since you must know that husky dogs adapt extremely well in cold weather, it would be a good idea to look for words related to that in other languages.

That is why we recommend the names Siku and Gelo. They both mean ice, and while the first one is in Native Alaskan and for both female and male dogs, the second one is in Portuguese and is only for male dogs.

Something similar occurs with Yuki which means snow in Japanese. While Sakari means sweet in Native Alaskan and is perfect for dogs that are playful, affectionate, and good companions for people of every age.

Husky dogs are also very intelligent and easy to train. So, Sophie would be the perfect name for female dogs that fit that description since it means wisdom in Greek.

Obviously, you want to give your husky a meaningful and attractive name. And we have provided you with many good ideas, but we’ve got many more dog names to choose from. Now you only have to shortlist your top five and choose the best among them.

Feel free to write in the comments section your opinions and the name you went for, because that will make us know that our guide has been helpful for you, and we would be very glad to read your responses!