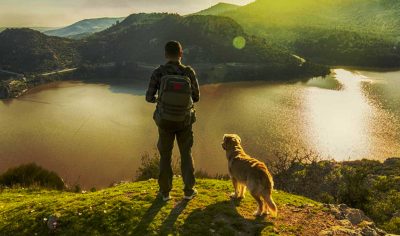 Love the outdoors? Then you will love our exclusive list of nature dog names. They are ideal for breeds made for the outdoors such as water dogs, sighthounds, and hunting dogs (see our list of hunting dog names), but also for nature lovers.

To build a proper list of this kind, we have examined a vast variety of topics related to nature, such as geography, natural travel destinations, history, literature, and more.

Therefore, all you need to do is to read, because we have even added sections that will take you by the hand, to explain to you which one would be the perfect name for your puppy.

Here are several options of nature dog names for you to choose from:

All languages have words that refer to nature itself as well as its many elements. Therefore, we decided to explore different languages such as Italian, Greek, French, and Welsh to come up with several ideas.

Everybody loves a unique moniker for their pup, and it can be hard to decide on one at times. So here we brought you a list of unique dog names inspired by nature in foreign languages! These names have beautiful meanings and sound good when you call them out to your favorite pet dog.

For example, you could name your male pup Brier, which means nature in French. It is especially good if you have a French dog such as the Barbet, then it would be an even better choice. You may also prefer a French puppy name.

If you have a female puppy, then you could name it Gaia, which means “from the earth” in Greek. Similar to our previous example, it would be an excellent name for a Greek dog like the Cretan Hound or the Molossus of Epirus.

If you have a dog that loves the outdoors and bursts lots of energy, then you could name it Sol, which means “sun” in Spanish. Bonus points if you own a Spanish dog since it will fit the mold perfectly. It is short, beautiful, and unique. You cannot go wrong with this choice!

Finally, if you have a blue dog breed like the Kerry Blue Terrier, Aussie or the Blue Lacy, then you could name it Azzurra, which means blue sky in Italian. It will make your pet stand out from the crowd.

Mother nature shows us amazing sights and unusual elements that are astonishing to all of us to watch. Let’s embark on a list of dog names inspired by the natural elements and their realm, which could perfectly fit your mutt.

For a big and strong dog like the Tibetan Mastiff, you could name it Gorge, which is a giant and famous canyon. It is short, bold, and unique. (Check out, in France, the Gorge du Verdon, incredible!)

Following the same line of strong dogs, you could name it Cypress. It would be a wonderful name for a Neapolitan Mastiff, as well as for a Bloodhound or even an American Bully XL.

If you liked our previous idea, then you could also name your dog Willow. It would be excellent for a hairy and adventurous female puppy. In our opinion, it is one of the most beautiful choices in this section.

Blizzard is one of the harshest phenomena in nature, and therefore, it makes an excellent name. It would be wonderful for an American Eskimo or a Malamute.

Waterfalls are one of the most beautiful displays of natural beauty, and they inspire our next natural dog name, Daileass. It means “from the waterfalls”, and it is an excellent name for a male puppy that loves the outdoors, especially if you plan to take it to areas that have nearby waterfalls.

Your male puppy is unique to you as your every outdoor adventure. You’d want to name him with all your heart! So here’s a list of all the great male pup name ideas you can think of in natural surroundings for your distinctive male dog.

If you want to raise your dog to help you with work in the field, then you could name it Fielding. It means “the one who lives in the field”. Therefore, it would be an excellent name for a German Shepherd, Border Collie, or an Australian Shepherd, for example.

If you want to give your dog a powerful name that inspires strength and respect, then you could name it Orion. It means “rising in the sky”, and in our opinion, it is a bold statement.

For a black dog, you could choose the name Onyx, which is one of the most precious stones from nature. It would be an ideal choice for breeds like the Gordon Setter, the Black Russian Terrier, or Newfoundland.

For a breed that was raised for the outdoors, and a favorite for mountain climbing such as the Bernese Mountain Dog, the Siberian Husky, or the Portuguese water dog, you could choose the name Ridge, which is the term used for the spine of a mountain. Ridge is also perfect for –you guessed it!– a Rhodesian Ridgeback puppy.

Finally, for a farm dog such as the Swedish Vallhund or the Danish-Swedish Farmdog, you could name it Wren, which means “from the farm”.

Now it is time to explore the best nature-inspired names for female pups.

Let us start with an exotic suggestion, Sahara. Perhaps you are familiar with the largest hot desert in the World? Although it is a beautiful name for any female puppy, it is an even better option if you have a desert dog such as Cairn Terrier. It would then make even more sense to choose this option.

If your puppy has an especially courageous nature, then you could name it Everest, like the famous mountain. Similarly, you could name it if it is a dog that does great when it comes to mountain climbing, like Bernese Mountain.

If the coat of your puppy is golden, then you could name it Goldie. Self-explanatory, a name inspired by one of the most precious metals from nature, gold.

Finally, if you are looking for a short name, then you could choose Ivy. A name inspired by the deep green climbing plant. An excellent name for a dog that loves to explore the outdoors, especially the forest.

Like the weather conditions are everchanging, from windy, and rainy, to stormy and sunny. Every dog’s mood varies, too! They can be robust and aggressive, or they can be calm and playful.

With this list of dog names related to weather, you can find and compare your mutt’s energy and name him accordingly.

Now you have in your hands a full guide about nature dog names. This is the most complete list you will find on the internet, and as you have seen thanks to our sub-sections and specific recommendations, you can see that we do what we preach.

We recommend you examine our complete list carefully, so you can match the meaning of the name to the nature, temperament, and unique features of your pet. Want more regular ideas? See our most popular dog names!