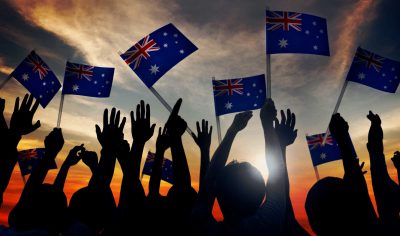 Are you looking for Australian puppy name ideas? Good news, you have arrived at the right place on the internet! It does not matter if you are Australian, if your dog is from an Australian breed or because you simply love the country; our list will bring you the most complete list with over 150 options!

Therefore, we can guarantee you that you will find exactly what you are looking for. Even better, we are going to give you specific suggestions in the next sections, so you can navigate our list easily!

We have obtained several ideas from famous Australians. Therefore, you will find all of our suggestions below.

If you are a fan of skating, then you should consider Bradburry. He is a famous Australian Olympic speed skater, so the suggestion is self-explanatory now. It is an even better choice if you have an athletic dog like the Greyhound or the Dalmatian.

For a female dog, and in case you are a fan of the movie, then you could name it Cate, like the famous Oscar-winning actress Cate Blanchett. It would be a wonderful name for any female pup.

We definitively have to suggest the following name idea, Hugh. The famous Australian Hugh Jackman inspires it. It is short and sounds cool, therefore, it would be the ideal name for any male pup.

If you like Arts and especially poetry, then you could name your dog as Banjo, a famous Australian poet. It would be an even better choice if your pet were especially sensitive and expressive. Some breeds would be the Australian Shepherd, the Border Collie or the Cavalier King Charles.

Now you have some ideas on how to name your dog if you want to represent some of the best-known names from Australia.

Australia has many important and iconic places, and therefore, they also serve as a source of inspiration for generating dog name ideas. You will find some of our best suggestions below.

If you want a name that outstands from the rest right off the bat, then you could choose Wagga Wagga. It is one of the most important inland farming regions in the country; therefore, it would be ideal for a farm dog.

You could also name your dog as Uluru, which is one of the most important attractions in the country. It is a sacred place for indigenous people in Australia, and therefore, it is both an exotic and powerful name.

If you are a fan of nature and the outdoors, then you could name your dog Kakadu, which is one of the most important natural parks in the country.

Finally, if you have a puppy that loves swimming, then you could name it Coral, which is The Great Barrier Reef. Australia is full of beautiful beaches and marine beauty, and this is one of the greatest displays of it.

Here are several options of australian dog names for you to choose from:

Australian cities are iconic and they also sound cool. Therefore, they make excellent names. Let us check some of the best ideas.

If you want to make your dog represent Australia at its best, then you could name it Adelaide, which is the capital city of the country. It is short and sweet, hence it is ideal for a female pup.

If you are looking for an exotic puppy name, then you could choose Toowoomba. It is a large inland city in Australia, and the name itself stands out and sounds funny in some sense, so it is a worthy recommendation.

If you have a large dog, then you could name it like the largest city in the country, Sydney. It sounds cool and immediately makes you think of Australia. Therefore, it does the job very well.

Finally, if you want another name that you do not hear very often, then you could name it Bendigo. It is short, uncommon and sounds good. Therefore, it matches all the requirements.

Australia has many iconic words that you will not find anywhere else, therefore, you will find our best suggestions below. Nonetheless, you will find all of our options on our list.

Australian slang is a great source of inspiration. For example, you could name your dog Ozzie, which is a term used for an Australian. It makes even more sense if your dog breed is native to this country.

Following the same line, if you have a male pup, then you could name it Bloke, which is a slang term used for a man. We like it because it is short and sounds masculine right off the bat.

Even though it is the name of a food, it is typical to Australia. We are talking about Vegemite, and if you are a fan of this food, then it makes even more sense to name your dog like that.

Finally, if you have a female pup, then you could name it Koorah, which is a popular term in the country used to refer to a woman. It is feminine, unique and beautiful. Therefore, it makes an excellent choice.

Now that you have our full list and suggestions of Australian puppy names, it will be much easier for you to name your dog. Study our recommendations patiently, and you will find exactly what you were looking for!