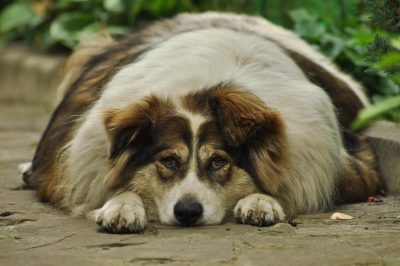 While an obese dog is unhealthy, we all love a plump puppy! Enjoy our list of the best fat dog names for chubby puppies and bold personalities. Be inspired by all these fleshy pet names for thick and stout dogs!

Do you have a four-legged friend that weighs more than the average dog? And you don’t really know how to name it? Then, you’ve landed on the best page! We have over a hundred and fifty cute names to give to fat and chubby pups! Just pick the best one!

Hopefully, you won’t have an obese dog. And the reason why you’re here is simply to find a name that matches your dog’s appearance. Perhaps you own an English Bulldog or even a French one at that. Just like every dog name out there, make sure you will not feel a certain way when using it in public!

Here are several options of fat dog names for you to choose from:

There is no way you have forgotten about the large purple dinosaur called Barney, from Barney & Friends? So if your male dog loves to play and gets along with other pets and people, that name can be the one.

We also have the name Winnie. It is almost impossible that you haven’t watched this teddy bear when you were a kid! So you do know that this name is perfect for male puppies that have a yellow coat. Especially if they are just as cuddly and loveable as Winnie The Pooh. If you any teddy bear names, you might also like Paddington, Ted, or even Baloo!

On the other hand, you can call it Shrek if your male dog is independent and energetic. Also if, despite its unfortunate appearance, it’s really peaceful and caring. Shrek is not an ugly dog name, after all.

And what about Violet? Do you remember the little blonde girl from Charlie and the Chocolate Factory? After ignoring warnings, she started getting bigger and bigger until she became a giant blueberry! Yes, that Violet. So, if you have a small female dog that is stubborn, hungry, and fearless, that’d bee a great chubby dog name for her.

Then, we have Totoro as the cute character from the Japanese animation film My Neighbor Totoro by Studio Ghibli. For those who know, Totoro is irresistible! If you have a male dog who enjoys spending time with you and is friendly at the same time, that is a very good option. It’s a name for a fluffy cuddle-magnet!

On the other hand, if you have a female dog that gets angry easily or likes to be always the center of attention, you can name it Ursula as the main antagonist of “The Little Mermaid”.

Our last recommendation in this section is Pumbaa as the character form “The Lion King”. This name can match perfectly a male dog that is clueless but that has a loving personality and likes playing around.

Foreign Languages To The Rescue

We are going to start by telling you two words that both mean “fat”. The first one is Gruby in Polish, and then you have Gordo, which is Spanish. So, you can give the first one to a female dog while the second one is more of a big dog name.

On the other hand, if you want to give your four-legged friend a name with a friendlier meaning, then decide on Taro. The word means “big boy” in Japanese.

What if you have a female dog whose most outstanding feature is not its size, but its expressive eyes? Then you can give it the name of Naria. It means “big eyes” in Quechua, the language of the Inca Empire.

You can also give it to your male dog the attractive name of Magnus, which means “large” in Japanese. We’ve got many more Japanese words to use as pet names!

And following the trend of names that mean “big, fat, and bold”, you also have the name Tai. This term comes from Chinese and can be given to a heavy female dog.

And last but not least, we have a more charming name! It’s Dulce and it means “sweet” in Spanish. So, if your female puppy is a cute and bold female dog, while also boasting a playful and happy personality, you have to choose that one.

You can call your male dog Taurus, as the zodiac sign that is represented by a bull, if it is strong and stubborn. A great name for pitbull breeds!

Then you have Panda, for cute and docile male puppies. Also, if it has a white and black coat and a lovely expression, the name will match it perfectly.

Another adorable name would be Piggy for a female puppy. You don’t think further explanation is needed, right?

What do you think of the name Hippo for a male dog? If your pet contrasts its big appearance with its warm temperament. Then, you can consider that one.

And what about Elle or Phant that both stand for “elephant“? They sound powerful and feminine at the same time! You can give either to your smart and caring pet, especially if she can sense your emotions and protect you from danger.

Plumpy and Derived From Adjectives

The first name we have for you is Chubz that comes from Chubby. We think that this name can be perfect for both male and female dogs that have round, little bodies, such as Puggles and Frenchies.

We also have the name Dumpy, perfect for female puppies that have low levels of energy, love resting all the time. And of course, who are big and round!

Another option is Norm. Can you guess what word it comes from? That’s not an easy one, so we’ll tell you. It comes from Enormous. So, as the name represents, you should give it to watchdogs that are not only big but tall and heavy. Think of Rottweilers, Rhodesian Ridgebacks, and the likes!

And the last alternative we offer you is Biggy that comes from Big. It sounds like a cute name for a large male dog, right? So, if your pet combines these two traits; you can consider this one. If you are a fan of Hip Hop, you can also link Biggy to The Notorious B.I.G. for instance, or Big Pun even!

Imagine calling your male puppy, Dumpling. How cute can that be? We think this is the perfect name for a small dog that has a soft yellow coat.

Another charming and lovely name is Bon Bon, this one is for female puppies and it means “round candy”. You can give it your pet is as small and sweet as this food.

And the last one is Callie or Cal, a short version of the word “calories”. Since the name represents the amount of energy we get from food, you can give it to female dogs that enjoy feeding time and are energetic but clearly big in size.

Don’t Be Offensive, Though!

Finally, what do you think of these recommendations? We’ve tried to come out with the funniest and cutest fat dog names. We hope we have not offended anybody! Make sure you feel comfortable using whatever portly name your choose for your puppy in public.

Did you like this guide and found it useful? Please, don’t forget to leave in the comments which name you prefer and why! We love reading all your responses.