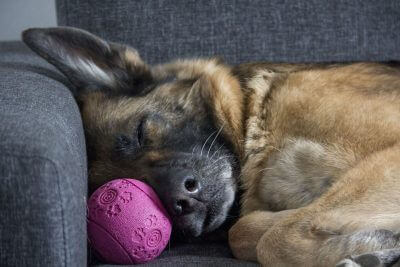 German dog names are simply incredible, that’s why we built a list completely dedicated to them, bringing you over 225 options. All at your entire disposal.

If you own a puppy from a German breed like the German Shepherd, the Boxer or the Rottweiler, then this list will be everything you need, because it compiles the best dog name ideas that this fabulous country and culture can bring us!

Germany is home to authentic stars in different aspects of human knowledge and talent like music, cinema, literature, science and sculpture. Without any doubts, loads of amazing contributions.

Beethoven comes to mind because he is one of the most famous composers in the world. The same goes for Mozart, Bach, and Strauss. All of them amazing choices of a name, because they sound powerful, classy and sophisticated, and they will be a perfect match depending on the kind of message you want to convey.

Here are several options of german dog names for you to choose from:

The German language is full of amazing names for a male puppy. For example, you can choose Adolph, which means noble dog. One of the best names for a German Shepherd.

If you think the idea of nobility for your dog, then you could name it Alaric, which means Noble Ruler. It’d be a heavenly name for a Great Dane, for example. There’s something about such breed and the name that go strongly together. In our opinion, it’s one of the finest Germanic puppy names.

Following the same line of noble names, we have an excellent suggestion: Albrecht. It means noble and bright. It’d go very well along with Weimaraner, one of the best hunting dog breeds that Germany has to offer.

You could also name your puppy Axel, which means Father of Peace. It’d be a good match for a breed like the Giant Schnauzer, because they are big and imposing yet gentle and calm.

For big and strong dogs, the name Bernard will fit the bill. Strong and big as a bear. Therefore, if your puppy resembles a bear in more than one way, then now you have an amazing choice of name!

Alger means Clever Warrior. It sounds cool and has a deep significance. It’d be a good choice for water and hunting dogs. One of the most powerful German dog names.

For dogs that love to explore the wilderness, and whose owners are fond of mythology and fantastic stories, this name will be an amazing option: Alvin. It means noble friend and friend of the elves. Then, if you got a little puppy with the blood of an explorer, and you love reading authors like J.R.R Tolkien, then you’re in front of, possibly, the best name for your pet.

Finally, we have another amazing suggestion for hunting dogs: Blitz. It’s the name for sudden attacks, what a better choice than it for a dog that’s as fast as a thunder and as effective as a sniper?

If you would also like to connect your pet to the sense of nobility, then you could name it Ada or Addie, for both options mean noble.

You could opt for the name Arabelle, which means Beautiful Eagle. It sounds cute and sweet, and as you’ve just seen, its significance is up to the level of the message you want to convey, that you have the most beautiful puppy around.

You can also name your puppy Beatrix, which means “She who brings happiness”. It’d be a nice pick for a female Pomeranian pup, because such dogs are a real joy to have at home. Always eager to please and happy to see you. They will bring loads of happiness into your life.

For strong and robust breeds, you may want to choose Britta, which means strength. It’d be a very good choice for a female German Shorthaired Pointer, for example.

Amongst the coolest German dog names, we have Edwina, which means prosperous friend. Ideal for any kind of breed, be it Germanic or not.

Another excellent female Germanic puppy name is Elbe, which is one of the major rivers in Central Europe. It’s strong and flows freely, perfect if your dog shares such characteristics as well. On top of that, it’s one of the most beautiful German dog names.

Finally, if you have a female puppy that you believe is going to evolve into a very loyal yet imposing dog, like a Great Dane, then you could opt for naming it Frederika, which means Peaceful Ruler. Powerful yet gentle, what a beautiful combo and cool-sounding name.

What Name Should You Pick?

At the end of the day, it’s up to you. However, now that you have our complete list of the best German dog names, your life will be much easier, especially since we have given you specific recommendations. Explore what makes your dog breed unique, analyze what kind of message you want to bring with your puppy and then choose the name that better fits the mold.