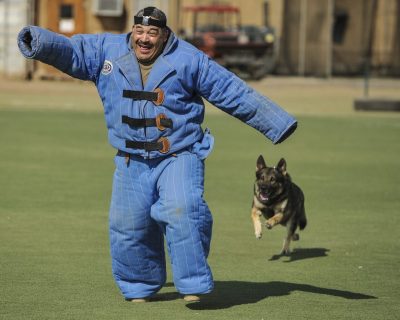 Here are several options of guard dog names for you to choose from, which resemble the true nature of your puppy. Be it a Dobermann, Rottweiler or German Shepherd, you will find the best name for your watchdog right here.

We’ve examined different languages, cultures, shows, artists and more to come up with a unique list of names that will fulfill all of your wishes, and therefore, meet your expectations. Perhaps, even surpass them!

Here are several options of guard dog names for you to choose from:

If you got a brave male guard puppy, then this is exactly what you are looking for. They are strong, powerful and showcase tons of confidence, exactly the kind of message you want to transmit with your soon-to-be guardian that will protect your home.

For example, you can opt for the name Anax, who was a fiery Greek tribal king. If you want to convey such a powerful message with your dog (why wouldn’t you?), then this is exactly what you need. On top of that, it sounds very cool and original.

If you’re fond of mythology, you will love our next suggestion: Ares. You can name it after the ruthless and almighty Greek god of war. Enough said about its importance and outstanding power, and therefore, a worthy name for your pup.

Besnick is another fantastic name for your dog. It’s the Albanian word for loyal, which is one of the most important traits of all guardian dog breeds. Moreover, it’s not a name you get to hear every day, therefore, it will make your puppy stand out from the rest.

On the same page, we have Damon, which is Greek for loyal. Again, a beautiful and meaningful name for any dog whose mission is to watch and guard your home.

For the big, brave and strong guard dog, you can opt for Beast. Self-explanatory. It’s enough to make people think twice about messing up with your four-legged friend. It’d be an outstanding name for a Great Dane or Rottweiler, for example.

A similar name, but cuter, would be Bones. It still conveys a strong message, but for some reason, it sounds sweeter, so to speak. So, if you to tone down the impression a little bit, then here you have a fabulous option.

If you have a bossy and imposing dog, then what a better name than Boss? It will automatically impose authority and let everyone know the attitude and power of your friend. Without any doubt, one of the best-sounding and most powerful watch dog names from this list.

Because the girls also do an exceptional job at protecting your home, here you have some spot-on suggestions for naming your little four-legged cutie.

You can name it Daenerys, as the brave and strong character from Game of Thrones. It will make even more sense if you’re a fan!

If you prefer to take inspiration from mythology, then you only have to explore the Greek pantheon a little bit to find out one of the most powerful and beautiful guard dog names in this list: Athena. The Greek goddess of war and wisdom.

Following the previous idea, you can also opt for Hera, a mighty goddess from Greek mythology. It sounds very well and the message it conveys is overwhelming, exactly what you want to achieve at the hour of naming your guard dog.

You could also name it Perandor, which is a strong and beautiful Greek word for Imperator. A guard dog is some kind of a ruler in its own sense, and therefore, it makes a lot of sense to name it that way.

Our list offers you over 75 names that will fit the bill because all of our guard dog names are the product of intensive research, which brings you options that truly identify the most important traits of your pet.

For example, you have Rebel, El Cid, Elektra, Bruiser, and Ammo. All of which are strong, beautiful, unique and meaningful names, and more importantly, they communicate strongly what your dogs are good at, guarding and protecting!

All you have to do is to explore all of our guard dog names and play around with the options. We’ve got more categories, too. As simple as that. Because you will definitively find exactly what you are looking for, guaranteed!