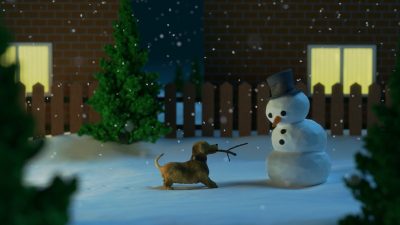 Whether you want to adopt a pet as a gift for loved ones or yourself during the holidays, first, check out these cool Christmas dog names to consider. Christmas is the time of giving and loving. Thus, it’s not a bad idea to give your pup a holiday-inspired name. Besides, you adopted it during the most beautiful and festive time of the year, right?

Christmas names for dogs are also ideal if you live in a place where snow happens a lot. Or simply because the holidays are your most favorite part every year. Regardless of your basis, we will help you find the best holiday-themed name for your pooch.

Christmas dog names offer a lot of inspirations and ideas that you can give to your pup. You can choose from famous TV series, movie characters, and superhero puppy names. You may also want to explore anything that symbolizes Christmas, like Santa and his reindeers, frosty locations, and other holiday decors. There are many Christmas names for dogs; you only have to be creative and see what fits best for your pooch.

Here are several options of christmas dog names for you to choose from:

Do you love movies, and there’s one character that stood out and became your inspiration? Well, this is your chance to name it to your dog. If you don’t have one yet, you can shortlist these unique Xmas puppy names that we’re about to share with you (and there are many of them).

First, Fezziwig is from the fictional character Mr. Fezziwig in the movie Christmas Carol. He is a friendly and joyful man who symbolizes everything that is charitable and good within humankind. Just like your dog, it will provide you with happiness and loyalty throughout its lifetime. If Fezziwig is a little bit too fancy for you, Ralphie is another Christmas name for dogs to consider. He is an innocent, sweet, and determined young boy from the 1983 movie “A Christmas Carol”. This name is perfect for any dog breed due to its caring nature and loyalty.

When we talk about Christmas movies, one of the most hit films is the 2013 animated Disney film Frozen. This film’s set was during summer, but it has become one of the symbols of Christmas for families, especially children, worldwide. It’s because of the wintertime, snow, ice, snowman, and the reindeer that give the watchers some holiday feels.

Nonetheless, Frozen offers fun and friendly characters in which its names are also applicable for your pup. Beginning with Kristoff and Sven, an iceman and a reindeer, who were making ice for a living. Like its personality in the film, the name Sven is already a great Christmas name for dogs that symbolizes loyalty. Olaf, on the other hand, is the living snowman. He was a friendly, innocent, and outgoing friend, which are the most common personalities of canines towards its owner.

Of course, the film Frozen wouldn’t be complete without Anna and Elsa. They are sisters who were running Arendelle when their parents got drowned in the ocean. These are the perfect names if you’re adopting two female dogs.

Finally, if you prefer a more straightforward name, you would love to use Buddy. Your furry pal may not know its meaning, but it’s a common term to use in brotherhood and friendship. Buddy was also a fictional character in the movie Elf.

Let’s move on with our list of specific dog names with seasonal inspiration. It could be like holiday decorations, songs, greetings, and much more. We all know that Christmas is the most colorful and wonderful time of the year. It uplifts everyone’s spirit, regardless of triumphs and difficulties in life.

When we talk about Christmas, almost all of us know Santa Claus. He is a guy with a long white beard dressed in red robes with white trim and matches a red hat. Santa gives gifts to good children. No wonder why kids love its personification. Thus, if your dog brings joy and excitement to your house, Santa and Claus are two of the best Xmas pup name ideas to add to your list.

If you don’t want to be obvious, Kris is another optional name to give to your puppy. It means Santa Claus in German-speaking parts of Europe. Noel, which means Christmas season in French, may sound like it’s more of a human name, but any breed would appreciate you giving this beautiful name.

Every Christmas season, we often hear the song Jingle Bells. These two words, Jingle and Bell, are good Christmas dog names if you’re adopting two breeds. For your female furry companion, Carol is a very solemn name. It means a hymn or psalm. Eve, as in Christmas Eve, would make an excellent endearment for canines as well.

Like a star that sparkles and glitters at night, you can name your pup Twinkle. Christmas is all about being joyful and positive. Like our dogs, they bring happiness to our lives. Feliz, which means happy in Spanish, and Merry are among the unique Christmas dog names.

Giving Christmas dog names to canines can be challenging at times. As dog owners, we always want to provide the best for our pets, and it starts with giving the right name. If you’re having doubts and trouble deciding, remember that dogs will love any name that you’ll provide to them. But make sure that it won’t sound offending or rude.

You can start listing down names from your different sources of inspiration. Christmas dog names could come from your favorite books, holiday food, songs, singers, and composers. You may even get names from spiritual books (e.g., biblical dog names) since dogs are blessings to their rightful owner. Don’t rush giving your pup a name. Take your time, and observe its personality and looks. Is it a purebred brown dog name, or is it tri-colored? Is your dog sweet and clingy that loves cuddling or sitting on your lap? If so, you can use a cute name like Candy.

There’s no limit to choosing the best Christmas name for your furry pal. Pick one that is easy for you to pronounce, for the breed to remember. It is essential, especially for puppy training. When teaching your new dog commands like “sit” or “come,” you have to make sure that its name doesn’t sound the same.

For example, names that would sound like “Bit“ or “Dome“ would sound like “sit” and “come”. Otherwise, it would be confusing. Do you get the idea? As much as possible, you have to avoid mishearing the words. Other than that, the best Christmas dog names should make you and your pet happy.

It should be the one that will make your dog wiggle its tail and listen to your words. Don’t forget to prepare your pet for your Christmas dinner.

What’s Your Fave Xmas Names For a New Puppy?

Christmas dog names are not only good for the holidays but all year round. As a dog lover, make sure to find dog names that are fascinating and good to hear. With our list above, we hope you could get an idea for your pup’s name. Don’t forget to have fun while picking one.

Most of all, make sure that you’ll be comfortable and proud of saying its name even after the holiday season. Since you’re about to adopt a pup, here are some gifts to give to your furry pal. If you needed more puppy names to browse through, bookmark our massive list of 1000’s of dog names.