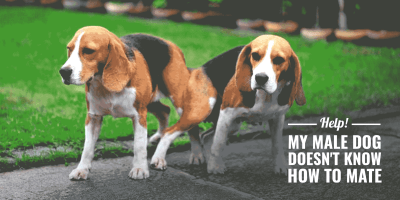 Not all studs are born proven. In order for successful canine mating to occur to produce offspring, both female and male dogs need to be aroused and prepared for the act of coitus, also called the copulatory tie. If your male dog does not know how to mate the selected female partner, you need to assess the situation.

Why is your male dog unable to mate?

As you can imagine, these problems are very different in nature and the solutions are drastically disparate. A disinterested male may need a little nudge or incentive while a mounting problem can, at times, be technically unsolvable when due to size differences.

Let’s review each of these three possible issues below so we can fix your male dog mating problem.

My male dog is not interested in the female dog

In some instances, either the male or the female may not be interested. For a female, this will naturally occur according to her heat cycle. The female dog will be interested (and available) for mating when she begins her ovulation and produces viable eggs, during the second stage of her heat cycle (i.e. estrus). Generally, a male dog is always responsive to such advances and has no problem completing the task. Other times, however, a male dog is not interested. This is often a fairly rare occasion though.

A female dog will show her male counterpart that she is interested in copulating by flagging her prospective partner. In doing this, a female dog tends to showcase her rear end to the male indicating she is ready. From there, a male dog will normally proceed by mounting his female. However, in such cases in which a male dog shows no interest, he will ignore her advances. He may also show some curiosity by walking around her and sniffing her, however, she will not make a move nor show any interest in the dam.

A male not showing interest in mating with a bitch can actually be due to a number of causes. Most often, it is due to their inexperience. It is common, during these rare occasions, that a male dog is about to perform his first act of coitus and having had no prior experience with a female, may not know what to do. This is often because of apprehension in the first-time stud dog, as well as stress.

For successful copulation to take place, it is recommended both dogs stay calm during the entire process. Any type of stress added to either dog will disrupt the natural flow of events and the event may have to be postponed. For example, oftentimes, the dog owners will stand around and watch. They do this in order to monitor the action or it may be curiosity or even their adherent need to want to “control things”. This should be avoided as it will only provoke anxiety in the dogs. To counter this effect, a viable solution is to have both dogs meet up prior to the planned date of coitus so they can become familiar with one another and completely relaxed when the day of mating arrives.

[pullquote-right]Never interrupt your dog during the entire process of the copulatory tie. Do not call it, do not watch it with insistence. Be discreet.[/pullquote-right]

My male dog is not able to mount the female dog

The most common reason for the inability of a male dog not mounting the female is due to the dog’s different sizes. Dogs who are not physically compatible with one another based on size and breed will have a much tougher time completing the act and it will, in turn, cause much stress for both the dogs and owners alike. Usually, due to their breeds, if a male dog is much smaller than the female it will be nearly impossible to get in the right position when on top of her. Likewise, if a dog is much bigger than his female counterpart, he won’t be able to comfortably locate the vulva and ensure his desires, thus, leading to failure for both parties.

In normal mating, after both parties have shown their interest, the next qualitative step is for the male to “mount” the female. Once the female has flagged her potential partner, the dog should instinctively know that he must mount her by climbing up on top of her to position his erect penis into the female’s vulva. This is the prime position, commonly referred to today as “doggy style”, in which the male dog can give to his partner in the most physically convenient way and the female dog receives. In this scenario, the male dog is, indeed, interested in the act but finds it impossible to mount her.

Another common reason for the inability to mount the female is because of stress and anxiety. This is often due to the female moving around too much during the act and making the task very difficult for the stud. The solution to this is to calm both dogs and always make sure the sizes are suitable.

The natural occurrence of events during a successful canine mating has its series of actions that will follow the other. First, the female dog needs to be in her prime time for mating. She should be ovulating and be in the second stage of her heat cycle, the estrus stage. She should also show interest in the copulatory tie, or at least be highly responsive to a male’s advances. The male dog also should show interest and have no qualms as to not being able to show the female he is in agreement with the act of mating with her. Once these preliminaries are established, the dogs may form their union to completion. However, on rare occasions, the dog may not physically perform to provide the right position for the act to prove successful. Artificial insemination may help in such situations.

My male dog is not able to finish the coitus

Male dogs are susceptible to unfinished copulatory ties — in other words, they mounted the female but could not reach ejaculation. In order for mating to be successful, the male must ejaculate and safely deposit his sperm into the female to hope for conception. It’s actually very rare for a male dog to fail to finish and ejaculate.

In the event the male dog withdraws before ejaculation, it could pose a threat to both male and female due to the male’s enlarged penis being stuck inside the female. Leaving a tie in this circumstance can result in immense pain for both. Therefore, breeders should aim to minimize any stress and pain before and during the act.

This could often be the case in which something was to interrupt and cause a major distraction to the mating dogs that would result in the inability to finish. For example, one of the dog owners requesting their attention or a very loud noise that startles the dogs. Another reason, as mentioned above, could be the inexperience of the male dog due to it being his first time. Furthermore, any pain experienced during coitus could inevitably cause the dogs to stop before completion.

In addition, a male dog can cause an abrupt stop in the middle of the copulatory act before he even becomes fully aroused. When a male dog slips out of the female before the bulb of his penis is enlarged is referred to as slip mating. This may occur if the bitch is not fully ready for penetration and moves out of the determined way. Due to a male dog’s second stage of ejaculation which contains the most viable sperm, it is possible to still impregnate the bitch during a slip mating if the semen was released in the beginning before the withdrawal of the penis. This stage in which most of the sperm is withdrawn is during the vigorous thrusting. It is also possible that a stud’s penis may have enlarged after the pull-out slip. In this case, a breeder can contain the semen into a container for later use.