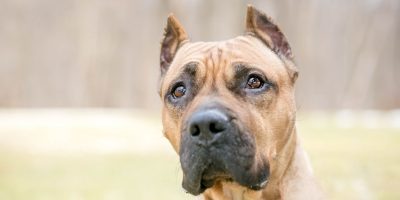 Many people are familiar with their dog’s amazing sense of smell but are less aware of their hearing abilities. A dog’s sense of hearing is more sensitive than our own – in fact, they can hear sounds as high as 45,000 to 65,000 Hz! As such, their ears are specially adapted to pick up faint sounds. The way that they do this, however, varies from breed to breed. This brings us to the different types of dog ears.

Dog ear types are extremely varied, ranging from the classic erect type to the candle flame and filbert types belonging to specific breeds. Each breed has its own standard for what its ears should look like. So, knowing the different types is very important for breeders and owners of show dogs. Ready to learn more about the most common dog ear types? Read on with us!

Most types of dog ears complement their breed’s working ability. For example, the longer ears of scenthounds might help to direct scent particles towards the nose, while the short ears of sighthounds ensure that the ears do not get in the way of their eyes. Because of this, many dog breed standards also describe what the ears should look like.

Erect ears are very common across a range of dog breeds! This is the typical ear position for many “wolf-like” dog breeds, but many smaller dog breeds also have this feature. Most dog breeds are not born with erect ears – instead, they are born with floppy ears that slowly stand up as they grow older. During this process, one ear might be floppy, while another is erect, or vice sera! Siberian Huskies, Alaskan Malamutes, German Shepherds, Samoyeds, Akitas, Swedish Vallhunds, and Chihuahuas are just some of the many popular breeds with erect ears.

Some breeds undergo ear cropping to get the erect-ear look. This practice is common for Doberman Pinschers, Boxers, Schnauzers, and American Pitbull Terriers. Ear cropping has a historic basis, traditionally done to protect a dog’s ears from predators or when fighting. Livestock guardian breeds have also been cropped, due to the belief that ear cropping enhances the dog’s hearing abilities. Today, ear cropping is a controversial practice. While the AKC allows ear cropping to preserve breed character and prevent injuries, the AVMA opposes ear cropping and tail docking for purely cosmetic purposes. The AVMA further states that ear cropping should be removed from dog breed standards.

There are several variations of the erect ear type. For example, bat ears are large in proportion to the head and are common in Chihuahuas and Cardigan Welsh Corgis. Hooded ears are less common than other variants – rather than sitting straight up, this ear type curves inwards slightly, as seen in the Basenji. Just like how erect ears can be pointy, they can be blunt and slightly round too, as seen in French Bulldogs and Chow Chows. Last but not least, a breed-specific variation of the erect ear is seen in English Toy Terriers. Experts describe the ears as a “candle flame” shape in the breed standard. These ears are set high on the head and are proportionately close together. They have pointy tips and slight indents in the sides.

Drop ears, also called lop or pendant ears, are one of the most common dog ear types. This ear type is very common in scenthound breeds. One theory states that their long, drooping ears help them to collect scents from the air and keep them close to their nose and face. Beagles, Bloodhounds, Basset Hounds, and Cocker Spaniels are just a few of the breeds that feature drop ears. A variant of the drop-ear is the V-shaped ear. This ear type is part of the breed standard for Hungarian Vizslas! The UK Viszla breed standard states that the ears must be proportionately long and thin, hanging close to the cheeks in a V-shape. This ear shape is also seen in the Bullmastiff.

There is a variation of the drop-ear known as the folded ear. People often confuse this ear with the “floppy” or “cocked” ear – the folded ear is still long. However, instead of falling straight down, this type extends away from the face first and then folds downwards. This type is seen in Bloodhounds, for example.

Rose ears are a desirable trait in some dog breeds. A rose ear folds inwards at the back lower edge, while the upper-front edge curves over, outward, and back, revealing the cartilage formation inside the ear. This ear type is desirable in the English Bulldog as per the breed standard, so many show Bulldogs will have this type. If the ears do not naturally form this rose shape, some owners will glue their Bulldog’s ears. This procedure is generally painless, but it’s best to have an experienced owner help with the procedure for the first time. This ear type is also seen in Greyhounds and Estrela Mountain Dogs. In contrast, this ear type is highly undesirable in breeds like the Bullmastiff.

Button ears stand upright but their top halves fold over. This fold is usually enough to cover the ear canal. This ear type is common in terrier breeds, such as Manchester Terriers, Smooth Fox Terriers, and Jack Russell Terriers. However, there is some tolerance in the breed standard for these dogs, as Jack Russell Terriers may have drop ears instead of button ears, for example.

The Filbert ear type is only found in one dog breed – the Bedlington Terrier. This breed’s ears are triangular with a slight projection at the base. In order to hang properly against the facey, the Bedlington’s ears must not be too thin or thick. Their distinctive ear tassells are built into the groom of the breed and were thought to once protect the ear tips when hunting.

The cocked ear, also called the semi-erect, semi-crop, or tipped ear, is an erect ear with a slight bend at the top – similar to the button ear, but the fold does not cover the ear canal in the same way. These dogs have exposed ear canals, which may help them to remain alert for quiet sounds. This ear type is common in Border Collies and Shetland Sheepdogs. For Shetland Sheepdogs, ears that are three-fourths erect are part of the breed standard, so many owners will “tip” their puppy’s ears after some time. While some Sheltie’s ears tip naturally, others will not – because of this, it’s important to wait to see what the situation with the puppy’s ears is for a few months first.

Still wondering about the different types of dog ears? Feel free to check in with our Frequently Asked Questions section for more information. When in doubt about your pup’s health, always ask your vet for advice.

How do I clean my dog’s ears at home?

Cleaning your dog’s ears at home is quick and simple to do. All you need is a dog-safe ear cleaner, cotton balls, and tissue. First, always make sure that your dog is calm and relaxed before starting to handle their ears. You may need to introduce ear cleaning gradually, rewarding your dog with treats as they allow you to handle their ears. Hold your pup’s ear flap upright and squeeze the ear cleaning solution into their ear canal. You’ll want to fill the ear canal for about 5 seconds. If your dog shakes their head after this, don’t be alarmed – this will simply remove the excess liquid.

Then, keeping your dog’s ear flap raised, gently massage their ear for about 30 seconds. After this, you can use a cotton ball to gently wipe any wax or debris away from the ear canal. Only remove dirt that is visible in the canal, so that you don’t push anything deeper into it. Once your dog’s ears are clean, gently clean them with cotton or tissue. And, as always, reward your pup for their excellent behavior!

What do ear positions mean?

Your dog’s ears are one of the best clues as to how they are feeling. Perhaps one of the most obvious body language changes comes when your dog pins their ears back – this indicates stress, anxiety, or fear. Another obvious change is when your dog pricks their ears up and forward. This signals that your pup is attentive and alert. When your dog is relaxed, their ears will rest comfortably in their normal position.

Which dog has the largest ears?

The Bloodhound is well-known for its long, droopy ears, which may be the longest dog ears of them all. In fact, one Bloodhound took the world record for just this – Tigger the Bloodhound‘s lengthy ears measure 34.9cm and 34.2cm. After the Bloodhound, the Coonhound and Basset Hound probably place as runner-ups for having the longest ears.

Your dog’s inner ear should be a healthy pink color. There may be a small amount of wax or black discharge, but they should be relatively clean and not smelly. The ear should also not be moist. If you notice redness, odor, head shaking, or ear scratching, these are signs of an ear infection.

Why does my dog keep scratching its ear?

Excessive ear scratching may be the result of an ear infection, yeast, or parasites like ear mites. In dogs, ear infections are very common. They are especially common in breeds with floppy ears, like Basset Hounds and Cocker Spaniels. The three types of ear infection are otitis externa, otitis media, and otitis interna. If your dog has an ear infection, it’s most likely otitis externa, an infection in the external part of the ear. Unfortunately, otitis media and interna can become serious, resulting in deafness and facial paralysis. This is why it’s important to tackle the infection before it progresses.

Ear infections cause head shaking, itchiness, dark discharge, odor, redness and swelling of the ears, pain, and scabs. Ear mites are a common parasite. These mites are microscopic and appear like tiny white dots, but are barely visible to the naked eye. Ear mites live in the skin of the ear canal, where they feed on ear wax and skin oils. This causes irritation, itchiness, and a dry, black ear discharge.

There are several different types of dog ears to be aware of when breeding and showing dogs. Each breed standard sets out what the breed’s ears should look like so that its character and working ability are not compromised.