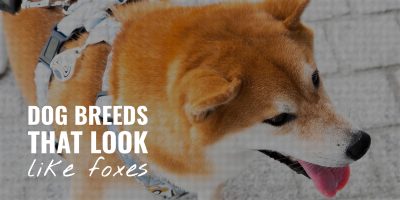 There are many dog breeds that look like foxes due to the evolution of Canidae. In fact, you may even confuse one with your beloved pooch. No, you haven’t lost your marbles. In fact, you are closer to the mark than you would imagine. You see, dogs and foxes share the same lineage. Foxes belong to Canidae, like wolves, jackals, or dogs.

The fox has a striking resemblance to several dog breeds. The pointy nose, fluffy fur, and almond eyes you love about your doggy are present in the fox. Both canines and foxes tend to give chase to whatever strikes their fancy. And, foxes are as clever as your tyke, if not smarter. So, let’s take a look at some fox-like dog breeds and discuss the kind of pets they make.

Now, why would anyone want to keep a pet that looks or behaves anything like a fox? Surely, foxes are wild and dangerous, right? Well, foxes may be wild, but they are also highly intelligent. They have a superior sense of smell, sound, and sight. And, whether you like it or not, they do have similar genes to your pooch. Although dogs come from the same family tree as the fox, they converge into the Canis sub-family genes. And, the foxes belong to the Vulpes. Thus, you see that dogs and wolves run in families and packs. But, foxes are solitary creatures.

Perhaps, it is also the reason that your doggy loves to do your bidding. Foxes are rarely seen as pets and are nearly impossible to train. Meanwhile, dogs are great at hunting, scouting, and excellent guard dogs due to their heightened senses. Dogs also are faithful and loving. At the same time, foxes do not fall into the ‘affectionate’ category of animals. So, if you want the best of both worlds, i.e. the looks and intelligence of a fox and the adaptability and loyalty of a dog then you’d want to read our list. Here are 10 dog breeds that look like foxes.

Standing 65-70 cm tall, weighing 30-39kgs, the Akita Inu hails from Japan. It is sensitive, courageous, and fiercely protective of its family. And, it bears a marked resemblance to a fox.

It is very shy around strangers, much like a fox. But, the Akita loves its owners to bits and makes for an irreplaceable family member.

When a child is born in Japan, it is presented with an Akita Inu figurine representing happiness and long life. Akitas are also great with small children and babies.

The smaller version of a Husky, the Alaskan Klee Kai, makes for an excellent pet companion. ‘Klee Kai’ means small dog in Inuit. But it has a huge personality. And, it bears physical similarities with a fox. Yet, the Klee Kai is anything but shy. It loves to play, kiss, and cuddle. And it loves most human company.

Basenji, one of the basal dog breeds, is another dog that looks like a fox. But, it bears a resemblance to a cat in its habits. It licks itself clean. It shows reserve and preference in its liking to select family members. Also, a Basenji does not deign well to training. But, it is a loyal friend to those it chooses to befriend.

Basenjis come from Africa. With a lifespan of 12-15 years, it makes for a superb companion for folks who want their beloved to be more independent and less clingy.

The Finnish Spitz is a dog that looks like a fox with a curly tail. It originates from Finland, weighs 12-13 kgs, and is famous for its friendly personality. But, you need to socialize and train your Finnish Spitz early on if you don’t want it chasing game like a fox.

Believe it or not, the Shiba Inu smiles. It’s not the sly smile of the fox. It’s more like a genuine adoring smile that is infectious. It is a Japanese Spitz breed that weighs up to 11 kgs and reaches up to 43 cm. Another name for this breed is Shiba Inu Fox.

Much like foxes, the Shiba Inu is an independent dog, highly intelligent and alert. But, it also makes for a faithful companion. So, you wind up with the best of both worlds.

A Spitz dog breeds straight from Italy, and the “Volpino” in its name means “little fox”.

It is a rare breed that is both active and affectionate. The Volpino needs early socialization and training to put up with strangers and other animals.

But, Volpinos make lovely family members. And, it is a dog that loves the sound of its voice. So, be wary of Volpinos if you seek silence and solitude.

A small-sized breed of dogs, the long coat Chihuahua make wonderful companions. It, kind of, resembles the fox with its fur and color. But, there, the similarity ends. Chihuahuas are not shy, quiet, or made to survive in the wild.

As a matter of fact, Chihuahua is a breed that loves to lord over everyone. It is one of the most popular dog breeds globally and takes to lavish living like fish to water.

Also known as the Continental Toy Spaniel, the Papillon is too cute to resist. It gets the name from its butterfly-shaped ears. And it is a happy and friendly breed that weighs up to 5 kgs. It is a small-sized dog but an active member of the family who likes to play around more than being lazy.

Papillons have a lifespan of around 15 years. They also have a natural aptitude for training. Hence, they do remarkably well as show dogs as well as therapy dogs.

And they love to lap up attention and care. These dogs were bred for royalty, and it shows in the way a Japanese Spitz carries itself.

Resembling an arctic white fox, the American Eskimo is a beauty to behold. It is a white dog that looks like a fox. However, unlike the fox, American Eskimos make terrific pets. Here’s a breed of dog that is affectionate, loyal, and playful. It seeks the companionship of its humans and loves the outdoors.

American Eskimos don’t skulk or hide around corners. No, this breed stands out where ever it goes with its playful and adorable personality.

As spectacular as a fox may be to look at, it does not make a domestic pet. But, no one ever said that you couldn’t adopt a pet that looks like a fox and makes a great companion, too. Note that there are also breeders who mate foxes with dogs. Some fox-dog mixes also exhibit mild temperaments ideal for domestic pets. But, it is safer to go with well-known dog breeds, the best of which are mentioned.