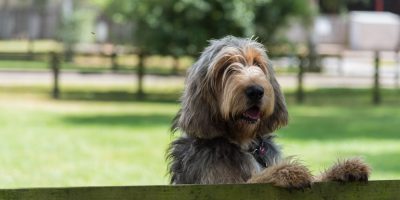 Otterhounds are a beautiful, delightful breed of dog. They’re also one of the rarest dog breeds in the world. If you’d like to do your bit in increasing their population, keep reading to learn how to breed Otterhounds!

Breeding a rare dog breed is a rewarding experience for any breeder. But first, you need to learn all about them. So, how do you go about breeding Otterhounds and what are they like as dogs? Let’s find out!

First of all, let’s take a look at the history of this interesting breed.

Otterhounds originated in the North-West of England during the early 19th century. The British breed is classified as a scent hound, meaning they were originally bred to hunt using their sense of smell.

As their name would suggest, they were most commonly used for hunting otters and are great at swimming. In fact, they have waterproof coats and have webbed feet making them incredibly well suited to the water.

Otter hunting dates back to the medieval period. Otterhounds, however, only trace back as far as the early 1800s. As otters are so intelligent, to be able to take them on, Otterhounds were said to need “a Bulldog‘s courage, a Newfoundland‘s strength in water, a Pointer‘s nose, a Retriever’s sagacity, the stamina of a Foxhound, the patience of a Beagle, and the intelligence of a Collie“.

In 1978, due to the dramatic decline in the number of otters left in the wild, they were placed on the list of protected species in Britain, and therefore otter hunting was outlawed. As a result, the number of Otterhounds also decreased. They have since become known as the most endangered breed of dog in Britain.

They’re also one of the rarest breeds in the entire world. In 2012, it was estimated that there were around 600 Otterhounds left globally. Described as “twice as rare at the wild panda”, they are currently the UK Kennel Club’s vulnerable native breeds list. That said, the KC is making great efforts to increase their population.

The precise ancestry of the breed will likely never be known with certainty. Among the breeds speculated to be the parents of the Otterhound are the extinct Old Southern Hound, the Bloodhound, the Foxhound, the Griffon Nivernais, the Griffon Vendeen, the Bulldog, and even the wolf. They are all thought to be Otterhound’s closest relatives, and there are even a few crossbreeds around.

The Otterhound is a large dog with a rough coat, medium-snout, and floppy ears. They have very sweet, expressive faces with fluffy eyebrows and beards. They also have quite long, muscular bodies with webbed feet and pointed tails.

The Otterhound has a shaggy, rough double coat that consists of a soft, shorter undercoat and a longer, wavy topcoat that is thick and water-resistant. They’re not a hypoallergenic breed as they are average shedders.

The most distinctive features about the Otterhound are their incredibly expressive faces, waterproof wooly coat, and webbed feet.

Otterhounds are lively, sweet, and playful dogs. They are loyal and loving towards their families and get on well with children. That said, they can be fairly clumsy and can unintentionally play a little rough sometimes, so supervision is advisable! Otterhounds are also happiest when they have a job to do and are extremely hard-working by nature.

They’re cheerful, sociable, laidback dogs and not typically aggressive, and are generally friendly towards strangers, though they may bark at them initially. Otterhounds also get on well with other dogs and animals, despite their hunting history.

They’re also smart and fairly easy to train. Training should start as early as possible and involve some impulse resistance training, as Otterhounds have scent tracking in their DNA. They will happily follow smells for miles if nobody stops them. Training sessions should be clear, concise, consistent, and fun to match your Otterhound’s energy and stop them from losing interest.

Because of their size, Otterhounds are not suitable for apartment living. They need a large home, ideally with an outdoor space. Otterhounds need 3-5 cups of high-quality food per day and plenty of protein to support their muscular bodies. Their coats need brushing at least once a week to avoid matting.

The Otterhound’s high-energy nature requires at least an hour of exercise per day, but preferably closer to two. Walks should be split into two and owners should vary them to keep them fun. If possible, try to involve a swim and some games of fetch to exercise those natural instincts.

As mentioned above, Otterhounds are playful, fun-loving dogs that are happiest when they have a job to do. They can become unhappy and frustrated if they get bored, which often results in destructive chewing behaviors.

To keep them feeling fulfilled and engaged, owners should involve them in family life wherever they can and give them lots of jobs to do. They should also play a lot of games and provide plenty of mentally stimulating toys to play with.

Otterhounds are a hardy, healthy breed with an average lifespan of 10-13 years. That said, every breed of dog has certain health issues that they are naturally predisposed to. These are the health problems most commonly seen in Otterhounds.

Otterhounds are at risk for both hip and elbow dysplasia, due to their large size and strong build. Dysplasia is a congenital condition that can make the hip or elbow joints grow abnormally, causing them to become loose, wobbly, and eventually leading to arthritis.

Symptoms of hip and elbow dysplasia include:

Dogs with symptoms should get a veterinary examination as soon as possible. There is no cure for dysplasia but it is manageable. The treatment a vet prescribes will depend on the severity of the symptoms. Mild dysplasia may only require lifestyle adjustments, non-surgical therapies, and pain medication, whilst more severe cases will need surgery. With treatment, a dog diagnosed with hip or elbow dysplasia can go on to live a long and full life.

Although it’s generally uncommon, epilepsy is the most seen neurological disorder in dogs and affects around 0.75% of the canine population. The main sign of epilepsy is seizures which tend to begin at around 6 months old. It is usually genetic and common seizure triggers include stress and tiredness.

Signs of an epileptic seizure include:

Epilepsy can be difficult for vets to diagnose, so it is important that owners keep a record of their dog’s seizures to aid diagnosis. Your vet may also request brain scans and other tests. Once a diagnosis is given, dogs with epilepsy will receive prescription medication that they must take every day for the rest of their lives. That said, once they are on their medication, the length and quality of their lives should be undisturbed.

Glanzmann’s Thrombasthenia (GT) and Canine Thrombopathia are hereditary bleeding disorders that are caused by a genetic mutation. This mutation stops the platelets in the blood from working properly.

Platelets are blood cells that help the blood to clot after an injury. This means injuries that may not be severe to most dogs could cause life-threatening blood loss in dogs with GT or Thrombopathia. Symptoms usually present before the age of one year old.

Signs of Glanzmann’s Thrombasthenia and Canine Thrombopathia include:

Diagnosis includes genetic and laboratory testing. There is currently no treatment for either condition, but dogs may require blood products following surgery or trauma.

The best way to manage this condition is to injury-proof your home to prevent trauma from occurring. This means soft food, protective boots for walking, soft toys for chewing, and making sure any hazardous areas of the house are off-limits. Owners should also be careful of which animals their dog interacts with and live close to an emergency vet hospital just in case of an accident.

Dogs bred from parents who both carry the gene for Glanzmann’s Thrombasthenia have a 25% chance of inheriting the condition, so it’s important that prospective breeders have their dogs tested for the gene. Dogs can carry the gene without suffering from the condition themselves.

Breeders must make sure that both of the breeding dogs are free of any genetic health conditions and registered with the appropriate kennel club. First-time breeders should make sure they have the required breeding licenses, are familiar with the signs of pregnancy & labor, and have the necessary supplies for whelping. During the mother’s two-month-long pregnancy, she must attend regular vet check-ups and have her dietary requirements met.

The average size of an Otterhound litter is 4-7 puppies. Puppies should live on their mother’s milk for the first month of their lives, then transition slowly to a dry diet at 7-8 weeks old.

Large dogs don’t tend to experience dystocia or difficult birth, but breeders should familiarize themselves with the signs of dystocia just in case.

The average cost of an Otterhound puppy in the US is currently $1500 to $2500. They are on the expensive side due to their rarity.

According to PetKeen, the average cost of taking care of at Otterhound is around $1420 per year. This covers health care, food, grooming, and other expenses.

How To Breed Otterhounds: FAQ

Otterhounds are full of energy and fun. They are faithful and affectionate with their families and friendly towards strangers and other pets. They love to be a central part of family life and also love children. However, they can play a little rough sometimes, so supervision is advisable!

Are Otterhounds the rarest breed in the world?

Otterhounds are not the rarest breed in the world, but they are one of the rarest. In 2012, it was estimated that there were around 600 of them left worldwide.
Otterhounds are, however, the rarest dog breed in Great Britain, where they originate from. In 2016, only 41 Otterhound puppies were registered with the British Kennel Club. Described as “twice as rare at the wild panda”, they are currently the UK Kennel Club’s vulnerable native breeds list. That said, the KC is making great efforts to increase its population.

Why are they so rare?

Rest assured, it has nothing to do with their character. As their name would suggest, Otterhounds were originally bred to hunt otters. In 1978, due to the dramatic decline in the number of otters left in the wild, they were placed on the list of protected species in Britain, and therefore otter hunting was outlawed. As a result, the number of Otterhounds around drastically reduced too.

Symptoms include bleeding gums during teething, frequent bloody noses, blood in the urine and stool, and claws and skin that get hurt easily. There is no treatment for Glanzmann’s Thrombasthenia, so the careful prevention of injury in everyday life is essential.

Dogs bred from parents who both carry the gene for Glanzmann’s Thrombasthenia have a 25% chance of inheriting the condition, so it’s important that prospective breeders have their dogs tested for the gene.

Otterhounds are fairly high-maintenance dogs. Their coats also need brushing at least once a week to avoid matting. They also need at least an hour of exercise per day, but preferably closer to two. Otterhounds should be involved in family life as much as possible and continuously engaged with lots of fun and games.

Otterhounds are not a hypoallergenic breed of dog. They are fairly average shedders and would not be suitable for somebody with allergies to dog fur.

Otterhounds are fairly messy and clumsy, often spilling their water everywhere and getting food caught up in their beardy faces. However, we just think that makes them all the more lovable!

Otterhounds are a lovely breed of dog with a very low population. We strongly encourage anyone considering breeding Otterhounds to do so, just as long as they are ethical in their practices and take their time to understand the breed first.