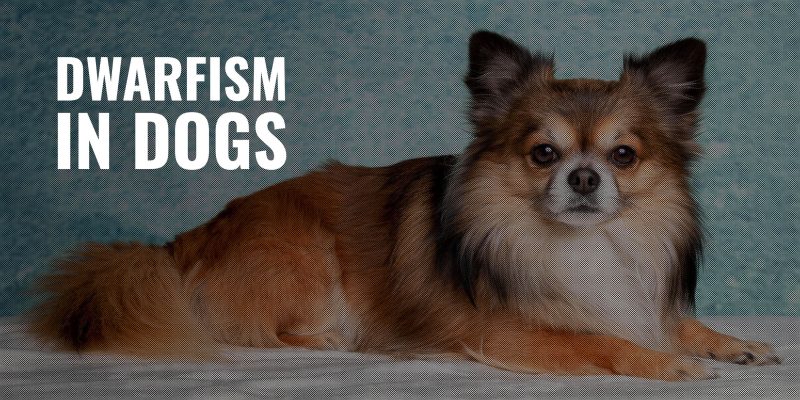 Every pet parent has seen countless viral videos of dwarf dogs, particularly German Shepherds, on the internet. But what causes dwarfism in dogs? Does it cause any health problems for dogs? These are all questions that many dog owners find themselves asking.

Symptoms of Dwarfism in Dogs

Puppies with dwarfism are usually indistinguishable from their littermates up until they are two months old. By this time, the slower growth rate, lack of guard hairs, and retention of the puppy coat become noticeable. Often, German Shepherd puppies with dwarfism have a coyote-like or fox-like appearance due to their smaller size and woolly coat. The puppy’s alopecia develops gradually, usually missing the head and legs, and permanent dentition may come through late or be completely absent. As well as this, the testes and penis are small, or the female’s estrus is irregular or completely absent. Other symptoms of pituitary dwarfism in dogs include muscle wasting and a thin skeleton. Finally, puppies with dwarfism often have a shrill bark.

Because pituitary dwarfism comes with secondary hypothyroidism, many dogs with the condition show classic symptoms of hypothyroidism. Hypothyroid dogs often have droopy face muscles, giving them a “tragic “expression, as well as recurrent ear infections and weakness when walking. This secondary condition also causes extra pigmentation of the skin, especially in areas of friction like the armpits.

Diagnosis of Dwarfism in Dogs

To diagnose your puppy’s dwarfism, your vet may carry out blood tests to look at their hormone levels. Your puppy’s levels of plasma creatinine and phosphorus may be abnormally low. Also, the circulating levels of growth hormone are detectable but low in comparison to a non-dwarf dog. A regular blood test may not detect that anything is wrong with your dog, so DNA testing and imaging may also be necessary to diagnose the condition.

DNA testing can identify pituitary dwarfism in your dog. Dogs with the condition will have mutations in both of the alleles in the LHX3 pair. Dogs with one abnormal allele are carriers of the gene and may pass dwarfism onto their offspring, but are not dwarves themselves. Through DNA testing we now know that German Shepherds and Karelian Bear Dogs pass on dwarfism as an autosomal recessive trait.

An MRI or CT scan of the brain may show cyst formations. The pituitary gland of a dog with pituitary dwarfism may appear normal, enlarged, or small, and not all dogs with this condition show abnormalities in a brain scan. Other useful diagnostic criteria include comparing the puppy’s height to their littermates, skin biopsies to look for cutaneous lesions, and looking for evidence of delayed long bone closure.

Getting your pup the treatment they need for their pituitary dwarfism is important. Without treatment, a dog with this condition succumbs to secondary conditions or requires euthanasia at an early age. This may be due to infections, neurological problems, or degenerative diseases like kidney failure. But if your dog has pituitary dwarfism, do not panic. Early treatment can improve their quality of life.

Few medications can treat dwarfism in dogs. While it may seem most obvious to provide dogs with growth hormone injections, these are costly and canine growth hormone is not available for therapeutic use. So, the long-term treatment of pituitary dwarfism may include medroxyprogesterone acetate (Megace®) injections. This drug encourages the expression of the growth hormone gene in the mammary glands of dogs. If successful, this treatment allows for some increase in body size and allows the adult hair coat to grow. Unfortunately, this treatment comes with the risk of several side effects. These include skeletal problems, mammary tumors, diabetes, acromegaly, and skin infections.

The recommended treatment for secondary hypothyroidism is synthetic levothyroxine. This drug works by replacing the missing levothyroxine in your dog’s body. Because its effects vary considerably, it is important to monitor the dog’s progress closely. If the dose is too high, anxiety, restlessness, and weight loss may be seen. Generally speaking, levothyroxine treatment should bring about some improvement within 4 to 6 weeks. Until then, your vet may ask you to bring your dog in regularly to check on their progress.

Some dogs with pituitary dwarfism benefit from spaying or neutering despite their very low fertility. Firstly, female dogs with dwarfism tend to experience heavy bleeding when in heat as well as irregular, frequent cycles. This can cause proneness to urinary tract infections. Both male and female dogs with dwarfism may re-grow some of their fur after spaying or neutering. However, this change is sometimes only temporary, and the dog may lose their hair again after some time.

If your female dog is due to receive medroxyprogesterone acetate treatment is it advisable to spay her before starting. This is because this treatment may lead to a painful infection in the uterus called pyometra, which can be life-threatening if not treated early.

Pituitary dwarfism is most common in German Shepherds. However, it is also common in breeds that are close to the German Shepherd, such as Czechoslovakian Wolfdogs and Saarloos Wolfdogs, according to one study. Dwarfism is also relatively common in the Karelian Bear Dog and the Norwegian Elkhound adds another study. To a lesser extent, the Weimaraner and some Spitz breeds may also develop pituitary dwarfism.

Achondrodysplasia is the norm for several dog breeds. These include the short-legged Basset Hound and the Dachshund. Other dog breeds are known to develop achondrodysplasia, however, including Labrador Retrievers, Great Pyrenees, German Shepherds, Alaskan Malamutes, and Scottish Deerhounds. One study discusses a Bichon Frise with pseudoachondroplasia.

Living With Dogs With Dwarfism

Dogs with dwarfism may require special care when living at home. Your dog with dwarfism will need extra care when it comes to feeding, exercise, and play, to ensure that they live a comfortable life.

You may need to supervise your dog when they eat. This is because some dogs with dwarfism also develop a condition known as megaoesophagus. This condition causes dogs to struggle to swallow their food. As a result, they often vomit after a meal and are often underweight. This condition can also cause water or food to aspirate into the lungs. In contrast, dwarf dogs without megaesophagus are prone to obesity. You can avoid this problem by feeding your pup high-quality dog food and making sure that they get plenty of low-impact play and exercise.

Dogs with pituitary dwarfism are prone to muscle wasting, exercise intolerance, and joint pain caused by abnormal bone alignment and pressure on the nerves. Because of these problems, you must talk to your vet about the level of exercise that your pup can safely do. Each case of dwarfism is different, and your dog may be able to exercise more or less than another dog with the same condition. Make sure to monitor your pup for signs of osteoarthritis. The signs include stiff walking, slow movement, and limping.

Have any more questions or concerns about dwarfism in dogs? Feel free to refer to our Frequently Asked Questions section for more details. If in doubt about your pup’s health, always ask your vet for advice.

How can you tell if a dog has dwarfism?

There are several ways to tell if a dog has dwarfism, but most signs become obvious by the time the dog is two months old. At two months, it is most apparent that the dog is not growing at the same rate as their littermates. Rather than developing more adult features, the dog retains their woolly puppy coat and permanent teeth come through late or not at all. As well as this, the male dog’s testes and penis stay small in comparison to their littermates.

As time goes on and the females reach sexual maturity, you will find that their estrus cycles are irregular or do not come at all. While the bark of the littermates may change or deepen, the bark of a dog with dwarfism stays shrill and higher in pitch.

Can a dog be diagnosed with dwarfism?

Your vet can diagnose your dog with pituitary dwarfism. To diagnose dwarfism, your vet will carry out blood tests, DNA tests, and CT or MRI scans to identify the condition. A special blood test can be done to look at the levels of creatinine and phosphorus in your dog’s blood, as these levels are sometimes low in dogs with dwarfism. However, a blood test alone often isn’t enough to diagnose pituitary dwarfism.

Your vet may try a DNA test to look for the gene that causes pituitary dwarfism. Lastly, an MRI or CT scan may be done to look for any tumors or cysts in the brain, and to observe the size of the pituitary gland. The pituitary gland may appear normal on scans but can be too large or too small as well. Not all dogs with pituitary dwarfism show signs in brain scans. To support the diagnosis, your vet will also ask about the size of the littermates, and may also take skin biopsies to diagnose any lesions of the skin.

Can dogs have dwarfism?

How common is dwarfism in dogs?

There are currently no precise statistics to suggest how rare pituitary dwarfism is in dogs, but vets describe it as a rare condition. According to Antagene, about 11% of German Shepherds in Europe carry the gene responsible for pituitary dwarfism. This percentage may be as high as 20%, adds the Saartje Foundation.

In contrast, achondroplasia is extremely common. This form of dwarfism is encouraged in several dog breeds and involves shortening of the bones and cartilage. Perhaps the most obvious examples are seen in short-legged breeds like the Basset Hound and the Dachshund, which exhibit a form of micromelic achondroplasia. Similarly, ateliotic dwarfism is encouraged in breeds like the Pug and Chihuahua. Achondroplasia is less common in breeds that do not naturally have these traits, though it occasionally appears in Labrador Retrievers and Alaskan Malamutes among other breeds.

Is there a test for pituitary dwarfism in dogs?

Apart from a DNA test, your vet can diagnose pituitary dwarfism through specialist blood tests and brain scans. These diagnostic aids may not be enough to diagnose the condition, however, and your vet will likely use more than one diagnostic aid to find out what exactly is causing your dog’s symptoms.

Pituitary dwarfism in dogs is a condition that occurs when a puppy inherits the gene from both parents. If you think that one of your puppies has dwarfism, make sure to check in with your vet for tests.