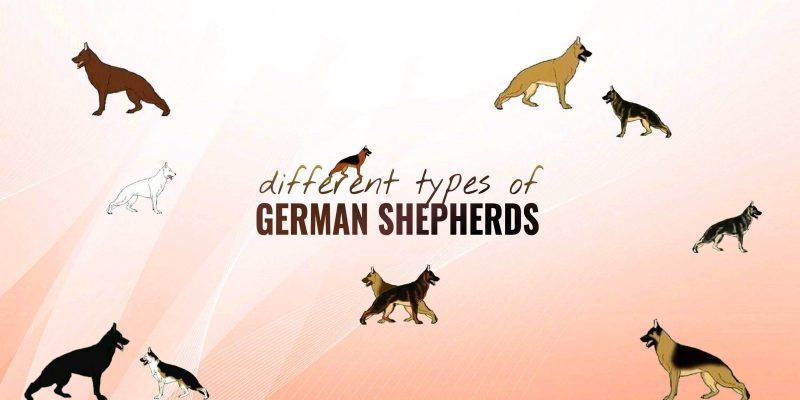 Who doesn’t know this breed, right? Everyone does. But wait! Could you recognize a German Shepherd if we only show you a picture of it? You can think without hesitation: yes! Well, maybe not. This is because there are many types of German Shepherds.

Just because they all belong to the same breed doesn’t mean they share the same characteristics and temperament. They come in a ton of variations and that will be according to the purpose they were bred for. Therefore, it’s always good to know more about the German Shepherd types, especially if you’re fond of this breed, and want to get one. In this guide, you’ll be able to learn all about the different types of German Shepherds, from their origin, to the way they look and behave.

How Did Different Types of German Shepherds Come to be?

Originally, German Shepherds were bred for different purposes, which led them to be either show dogs or work dogs. Let’s begin with German Shepherds that are used in law enforcement, drug detection, search, and rescue. These are working dogs and the reasons are obvious. They use their skills to meet a certain need. In working dogs, abilities are much more important than appearance. Therefore, some of their characteristics are:

Due to the great fame that this breed had, people also started to breed them as show dogs to expose their amazing skills through striking performances. In contrast to working dogs, these are some of the characteristics of show dogs:

German Shepherds are classified in lines that indicate their heritage and the kind of breeding they received.

These dogs are ideal for families because they are friendly and loving, and that’s true. Usually, since a German Shepherd is a demanding dog, they are not recommended if you’re a first-time owner. However, this type may be an exception to that rule.

So, you may be wondering how this type of German Shepherd exists, and the answer is amateur breeders, most of the time. You can be reluctant to get one knowing that, and we don’t blame you. The key point here is to carefully evaluate the conditions in which the dog has been bred in.

Also, don’t forget that in the end, this dog belongs to a breed that has several characteristic aspects. So, it must be loyal and strong, instead of fearful and nervous. If you pay attention to those aspects, you’ll be able to welcome an amazing dog to your family without problems!

A couple of hundred years ago, people started to breed German Shepherds in the US. They didn’t need to import dogs from overseas, and they also took the opportunity to build their consistent style of the breed. Their main goal was to achieve the perfect look and conformation rather than maximizing its capacities. That’s why they belong to the show line. If you are curious about the characteristics that make them differentiate from other lines, take a look at this list:

This type of German Shepherd doesn’t differ that much from what the original breed was. The one that Max Von Stephanitz developed. Therefore, you can expect them to have bold temperaments and outstanding abilities. These are high-quality dogs. They are excellent at guarding and search and rescue. However, this isn’t a surprise since these kinds of jobs live up to their skills.

They are also good as pet dogs if you’re willing to keep their minds always busy with challenging tasks. Being a working dog, the looks don’t matter that much, but they still have some characteristics that differentiate them from other types:

Maybe, the only downside of getting one is that they can suffer from more health problems than other working lines because in West Germany they aren’t that strict about health evaluations.

Now we are in the show line, and you’re probably thinking that it is more focused on their appearance? Well, that’s right, they have astonishing looks, but that isn’t all. The rules for breeding them are very strict in order to attain the desired standard. These dogs have won competitions and shows, so they are surely skilled.

German Shepherds are prone to suffer from hip dysplasia, but it’s rare for this line to have this illness. They are extremely healthy because they have regular evaluations and health checks. Also, don’t you think it will be very interesting to compare it to the American Show Line? Check out this list:

This line receives this name because, after World War Two, Czechoslovakia used these dogs as border patrol guards. They love challenges because they were trained for that. They are the most agile and intense, but also the smallest of all the lines.

German Shepherds from this line are incredibly obedient, trainable, and protective. They are not only physically strong but also their appearance is. In fact, they are the most like wolves.

Their coats are dark and have just one color: gray, dark brown, or black. You will be able to recognize them since they look very different from other types of German Shepherds. Also, they aren’t prone to suffer from health problems.

This is the last working line. The reason why there are west and east German lines is because of the Berlin Wall. This separation made possible the preservation of each lineage without external influences. In comparison to Western German Shepherds:

The East German DDR working line was bred for military purposes. That’s why they are not only strong, loyal, and skilled but they can also endure extreme weather conditions and long working days.

They undergo difficult physical tests to belong to this line, which talks a lot about their quality. However, they can be also aloof and destructive if they don’t receive constant training and physical activity.

German Shepherd Types Based on Coat

The color of their coat is probably the easiest way to recognize what type of German Shepherd you’re in front of because you can do it visually.

About the Different Types of GSD

Below, find our selection of the most frequently asked questions, with answers that go straight to the business. To solve your doubts, read on!

What are the five types of German Shepherds?

These are the five types of German Shepherds:

They are all similar and different at the same time. Their physical characteristics, such as their coat color and body shape can vary from one type to another. However, what can be very different is their personalities. This is because they were trained for different purposes. Some can serve as guard, military dogs, while others as companion dogs. That is an overall view of all the types, but you’ll find an extended answer reading the section that is focused on that in this guide.

What is the best breed of German Shepherd?

Let’s make something clear. There are not breeds of German Shepherds, instead, bloodlines is the term you should use. Going back to the question. The answer is: It depends on what you consider perfect.

If we take into consideration both appearance and temperament, we can say that the West German Show Line is a very solid option. However, there are dogs whose skills are on another level. Those who belong to the West German, Czech and East German DDR Working Lines are extremely useful, smart and strong.

What if you are looking for a family dog that is active and smart, but that is way more docile and relaxed? Then, you can consider the American Show line as the best for you. Each type has its own charm and choosing the best is not possible because it differs according to the person.

How do I know which type of German Shepherd I should get?

You have to decide why you want to have a German Shepherd and what’s the amount of time and attention you’ll be able to give it. Pay attention to these recommendations. You must consider getting a working dog if:

You are willing to participate in dog sports, tracking, or search and rescue, so your dog gets to display its superb abilities. If
you want a German Shepherd that accompanies you on your adventures and follows an active and challenging lifestyle

On the other hand, if you still want a German Shepherd but are scared because you think it will demand you much time and effort, then you can consider getting a show dog. Don’t get confused because they are still smart, agile, and protective, but of course, they have more docile temperaments and more attractive appearances. Bear in mind that all types of German Shepherds, whether they are working or show dogs, need early socialization and constant training. They can be excellent companions if you take care of the things we mentioned above.

Are there 2 types of German Shepherds?

In general, there are two lines of German Shepherds, the working line and the show line. The first one focuses more on abilities than on appearance, while the other is the opposite.

German Shepherds that are from the working line can perform difficult tasks and will be eager to do them because that’s their purpose. They are super skilled and strong.

On the contrary, German Shepherds from the show line have a luxurious coat and an elegant gait. They are ideal companion dogs because even though they are athletic and smart, they have calmer personalities.

The different types of German Shepherd are interesting to learn about and useful as show, working, and family pets. Know your German Shepherd types to impress other lovers of this beautiful breed.