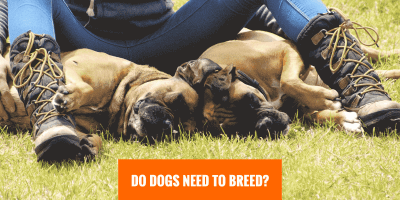 A lot of dog owners feel some sort of guilt when they decide to not breed their dog(s). Some pet parents avoid doing it because of moral and ethical beliefs (e.g. overpopulation) while some breeders discard some of their dogs from their breeding program. Regardless of the reasoning behind this decision, dog owners often think about these questions:

In short, dogs do not need to breed but frustration may come out of a lack of sexual interactions from the male. While, in the female dog, not breeding may have both good and bad health and hormonal consequences. Overall, it’s fine if you do not breed your dogs, but expect them to still show signs of wanting to mate. In females, these signs will show during her heat, and males will have a tendency to hump and chase females around.

Obviously, this article only talks about intact male and female dogs; if you have neutered or spayed your dog, you can start reading any other article but this one.

Do Male Dogs Need To Mate?

Dogs have not evolved in the way mankind has. Where we choose a sexual partner for a long-term relationship, dogs still think with the primal mindset of instant gratification. If a dog desires pleasure, especially a male dog, it will follow its natural instinct and pursue that pleasure. While they do not need to mate, it is a basic instinct of their nature to pursue sexual gratification.

There is not an actual requirement for male dogs to be neutered, but it is something that is encouraged in Western societies to prevent lots of unwanted puppies. If you do not intend to allow your dog to breed, a vet can advise you on the most suitable age for sterilization. Myths around behavioral habits resulting from your dog not being neutered still prevail, despite there being no evidence in support of this.

It is untrue, for example, that restlessness in male dogs is due to not mating, but rather that this type of behavior is because a dog can sense a bitch on heat nearby but cannot get to her. Having been sterilized, a male dog can, in fact, become calmer and more content, because the inherent frustration of smelling bitches on heat will have been dispersed and the dog will not be stressed. It is also a myth that a dog will become more aggressive if not neutered; and in fact, the opposite is more likely to be the case; the dog will be more placid.

It is common practice for young dogs who have not been neutered to partake in the act of humping, but with older dogs, it is perhaps not so common. Dogs can mount anything from pillows to the legs of an adult or even a child. If this type of behavior occurs on a regular basis, there could perhaps be a deeper problem. It is possible this may be due to the dog being excitable or anxious about something, for example, the arrival of a baby in a household or a reaction to a regular visitor. On the other hand, boredom and attention seeking are two common reasons for dogs to hump inanimate objects.

Solutions to alleviate your dog humping are to perhaps make sure it is getting enough mental and physical exercise. By identifying the reason for this type of behavior, you are able to remove the dog from a vulnerable situation or encourage it to submit to a sit or lay response. This would be encouraged with a treat reward. One important aspect is to ensure that everyone in the household keeps to the same rules and methods in dealing with this situation.

Whilst the act of marking territory is something both female and male dogs perform, it is more a common behavior for male dogs, particularly if the dog has not been neutered. Marking territory is regarded as normal behavior for a dog and it should not be punished, despite the frustration felt by owners. It is a normal canine trait which has nothing to do with whether the dog has been house-trained or not. Similar to humping, this behavior can be due to stress and anxiety, whether resulting from there being more than one dog in the household, a dislike of being left alone. New sounds or smells within the house, the dog’s routine being changed or strangers visiting a household are also factors to be considered.

Do Female Dogs Need To Mate?

Just like male dogs, if they have not been spayed female dogs do indeed have an instinctive yearning to mate. There is no evidence to suggest that female dogs have a motherly instinct and a need to produce puppies for satisfaction.

Furthermore, it is untrue to think that if she has an excitable nature, giving birth will calm her down; this will only come with maturity, and the correct love and attention. Unless you are a professional breeder, allowing your bitch to give birth is an extremely expensive process involving vet fees for basic checks as well as a string of dog breeding expenses. In the event of problems during the pregnancy or birthing, those fees will be significantly higher.

Advantages and Disadvantages of Breeding

If she has a trouble-free pregnancy, the litter of puppies will require an immense amount of time on the part of the owner to be nurtured in those early weeks. An important consideration for any breeder is where the puppies will end up. As well as a moral responsibility, there are certain laws that govern the rehoming of pets. In the event of suitable houses not being identified for the puppies, the breeder can be left with a litter of young dogs that will have a desire for sexual pleasure as they develop. In this situation, consideration for having your bitch spayed is a priority.

If you do not wish your dog to mate, it is obviously a good idea to have her sterilized as early as possible, but the vet is the best person to advise you on the time for this procedure. There is evidence to suggest that there are health benefits in having your female dog spayed, with the avoidance of harmful conditions later in life.

There is no set timeline for this. Smaller breeds can become sexually active from six months, with some females having their first heat cycle slightly earlier, at four months. Smaller breeds also tend to cycle more regularly than larger dogs. With larger dogs, it can take anything from six months to a year, and it is not unusual for females to take from two years to develop a regular cycle, and dependent on breed, female dogs can have from one to three cycles annually.

Female dogs may attract male dogs from the start of the heat period, but she may not be acceptant of their advances for a week to ten days. Signs that the dog has indeed become pregnant can include a white discharge, bleeding and swelling in the vaginal area. Unlike humans, female dogs are fertile even as they become older, and whilst it may take longer for them to produce a litter, they are still perfectly able to do so. There is the risk of significant health implications for older dogs who become pregnant.

The period when a dog is on heat is divided into several stages, these being the proestrus, estrus and diestrus cycles. The pro-estrus cycle can last from a week to ten days and is visible by a swollen vulva and discharge of blood. The estrus cycle lasts for five to ten days, during which time the female ovulates, the discharge becomes less but during this period, the female dog will show an interest in male dogs. Lastly, the diestrus cycle is when the female is found to either be pregnant or not.

Do Dogs Need Another Dog?

Dogs do not directly require another dog in the household provided they have a structure provided by all people within that household. This said, dogs dislike being alone, especially for extended periods of time. As dogs have become more domesticated, the companionship they crave is mostly with people. Like humans, dogs are individuals, each having their own traits and attributes.

To Get A Second Dog Or Not

If you are thinking about getting another dog, it is possible that your reason is to provide company for your existing dog. There there is no specific evidence that your dog needs a fellow canine within the house for companionship. It is important that your dog has regular contact with other dogs and interacts with them playfully — this should be part of socialization. There is no particular reason to provide him or her with a house-mate. Yet, dogs generally love each other’s company: they run at the same pace, like the same games, and so on.

It must be remembered that your dog feels a part of the household and is secure in knowing he or she is well loved. Work commitments often result in dogs being left alone for long periods of time. Many owners resort to the addition of another dog to the household to provide company for the first. However, the addition of another four-legged animal in the house may well not be the solution to this. As a dog owner, avoid replacing your lack of presence by another dog: this only results in two sad and lonely dogs.

If you do choose to add to your pack, there is no need for dogs to be the same breeds or ages. It is more important that their personalities are compatible. Many owners notice that their existing dog feels and acts in competition with the new one. This will be displayed over things such as food, water, possession of toys and even for your affections. Provision has to be made to ensure that there are separate sleeping areas and/or beds for each dog, and separate food and water bowls. This relates back to the pack structure that is required to be set by all people within the home. It is also advisable that there is plenty of room in the house to allow for each dog to have its own space.

When To Get Another Dog

There is no set time that you need to consider the addition of another dog to your pack. Your present dog can be anything from one year old onward, should be fully trained (which will help when a second dog arrives). This is because it is natural for them to follow the lead of the resident dog. However, try to ensure that you will be in the home for several days in order to observe the behavior of both dogs. During this period, you will want to know that the second dog is comfortable as well as your primary dog, both in each other’s company and within the home.

Dogs Of The Same Sex

Although breed and age is not a factor when adding to your pack, more consideration is warranted on the sex of a second dog. Evidence suggests that there can be a conflict if two bitches are present in the same house. It is unclear whether or not sterilization improves this and would again come down to each bitch’s personality. Two male dogs are more likely to cohabit readily. If you mix sexes, unless you specifically intend to breed these two dogs, they should both have gone through the sterilization process.

If your intention is to mate both dogs, it is not advisable to leave them alone for extended periods. Their behavior patterns should also be monitored closely and your veterinary professional should be consulted prior to the dogs being able to engage sexually.