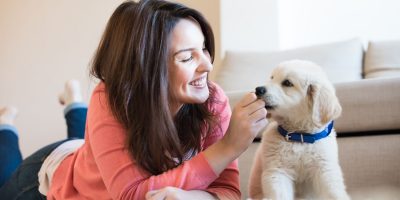 It’s one of the most exciting times in your life – it’s almost time to bring your new puppy home! Once you decide which breed suits your lifestyle and personality best, it’s time to pick the perfect pup from the litter. But how do you pick which pup is best for you? Puppy temperament testing is an important part of choosing your new furry friend.

Puppy Temperament Testing and its Purpose

If you’re looking for your new best furry friend, some simple personality tests may be able to help you make your choice! Temperament tests help to measure a puppy’s shyness, boldness, and friendliness, among other traits. However, there is no one-size-fits-all temperament test for puppies. While one test might assess for things like dominance (which is now outdated), another test might focus more on aggressive behaviors. One test might be suitable for puppies who are 6 months old, while others will wait until your dog is over 18 months of age. For a companion dog, a simple temperament test adapted from pre-existing ones is often more than enough to identify which pup is right for you. However, for working dogs, or dogs in shelters, the process is often more vigorous.

Temperament tests are useful tools for both breeders and handlers of working dogs. For example, temperament tests are important for Schutzhund trials. Before a dog can compete, they must pass the BH-VT temperament test. This test looks for basic obedience and confidence in a range of situations. Similarly, temperament testing for guide dogs is very important in order to identify which puppies are most suitable for work. Aggressive or fearful dogs do not make good guide dogs, so ruling out these dogs increases the rate of training success.

Some of your puppy’s personality traits will be clear by the time they are 7 weeks old. Because of this, tests like the Volhard Puppy Aptitude Test can be done as soon as your pup hits 49 days. However, 7 weeks is not old enough for the more advanced temperament tests. While some traits are evident at this young age, your puppy is still growing and developing, and the rest of their personality traits are yet to emerge.

Informal Tests for Picking Your Puppy

There is not a universal perfect puppy. The perfect puppy for you fits within your personal lifestyle and is compatible with you. So, the right temperament for you will also vary. One of the first steps is to ask the breeder about each puppy. Your puppy’s breeder has spent the past 7 or 8 weeks raising them, and they know each individual well! Oftentimes, a good breeder will be able to match the best puppy to the right owner with some guidance on what you are looking for.

Generally speaking, ask yourself these questions when choosing your puppy:

Although it may be tempting, it’s best not to choose the shyest, most fearful puppy of the litter. We all tend to fall for the underdog, but these fearful traits are difficult to change if you do not the experience to give this puppy confidence. The ideal family pup wants to with you and plays when invited to.

One such test is the Volhards Puppy Aptitude Test (PAT). These tests look at the “dominance and submission” of young puppies, in hopes of predicting their future personality traits. There are several requirements for doing this test.

Firstly, you must carry out the PAT test in a location that is unfamiliar to the puppies. Each puppy should be tested one at a time. The person scoring the test should be unobtrusive and should position themselves where they can see the puppies without having to move. And, most importantly of all, a puppy should not be tested if they are not at their liveliest or feeling unwell. This includes testing after vaccination.

Like any puppy temperament test, the PAT comes with its pros and cons. For example, the dominance theory has been disproven, so evaluating a puppy for their “dominance” is redundant – this test was designed in the 1970s! However, generally assessing a puppy for their boldness at 49 days old can be very helpful for prospective buyers. There are also flaws with the “sound sensitivity” test – if you create a sharp noise and the puppy does not react, it shows that either the puppy is deaf, or is already used to that sound.

The ATTS Temperament Test measures aspects of temperament like shyness, friendliness, stability, and aggressiveness. This is done through a series of 10 tests, which your dog must pass to earn the Temperament Test (TT) designation. For this test, your dog must be on a six-foot loose lead. You may not speak to your dog at all during the test, and nos signals are corrections are allowed. The idea is to test your dog’s natural, non-directed responses to things around them. Your dog must be 18 months old to participate. And, your dog can fail the test at any time if they show unprovoked aggression, panic without recovery, or strong avoidance.

The SAFER test is a seven-item assessment by the ASPCA that looks at aggression in shelter dogs. SAFER was developed in 1999-2000 by animal behaviorist Emily Weiss, amid complaints from APBT advocates that too many Pits were failing other behavioral tests. It identifies a dog’s comfort level with touch, restraint, reactions to new experiences, and arousal levels towards other dogs. This test is best done when the dog is at least 6 months old. Overall, the SAFER test is one of the most widely used tests in shelters across the USA.

While the SAFER test has helped shelters to adopt out more dogs, it’s not foolproof. One study shows that dogs’ results change after just three days of acclimation to the shelter. Thirty of the 33 dogs’ scores were different in at least one of the 7 SAFER items. Most noticeably, aggression was much lower in the acclimated dogs. Individual dog preferences can also skew results. For example, a dog’s particular disinterest in specific foods, toys, or other triggers can increase or decrease any aggressive response. Any variances in “helper” dogs in the seventh test can also compromise reliability, as dogs’ aggression towards other dogs may change with specific traits.

Have any more questions or concerns about puppy temperament testing? Feel free to check our Frequently Asked Questions for more details. If in doubt about your puppy’s development, always ask your vet for advice.

What age are puppies temperament tested?

You can usually get a snapshot of a puppy’s temperament by the time they are 7 weeks of age. By 7 weeks old, your puppy’s personality traits will become more obvious. When with the rest of their litter, you may notice your puppy being bolder, or, in contrast, allowing other puppies to push them around. Puppies in their seventh week are in their secondary socialization period, too, wherein they become more confident with approaching strangers. It’s important that your pup gets plenty of exposure to people you trust during this period so that they can continue to develop healthy social skills. Puppies at this age will also be very interested in play fighting with their littermates, which is important for their mental and physical development.

How important is puppy temperament?

Puppy temperament is extremely important. Not only does assessing puppy temperament allow you to pick your new best friend to bring home, but it also allows owners of working dogs to choose the right pup for the job. Oftentimes, the best working pups are those who make eye contact easily, readily engages with you, and does not crumble under correction from their dam or littermates. It pays to choose a pup who is willing and eager to learn and work.

How can you tell if a puppy is going to be aggressive?

Many pet parents mistake normal play behavior for aggression. They also laugh off behavior that is a warning for aggression. Although normal puppy play can be intense to watch, it’s important to be able to tell it apart from abnormal behaviors. In normal puppy play, your puppy will be very spontaneous. They will wag their tail, bow, emit high-pitched barks, and their mouth is often open but relaxed. The problem behaviors are prolonged growling, a fixed, “staring” gaze, lip curling, and stiff posture. Instead of bowing, an aggressive puppy will stand rigidly. A young puppy who responds to fear or pain by snapping and growling are also responding abnormally.

How important is puppy temperament?

Puppy temperament is very important! Breeding for a good temperament is how we get calm, easygoing dogs who settle well into families. In contrast, those looking for working dogs may look to produce puppies who are hard-working and full of energy. Each breed will have its own temperament, too. For example, a Belgian Malinois might be described as active, watchful, protective, hard-working, and confident. Similarly, a Labrador Retriever is often intelligent, even-tempered, kind, and gentle. In contrast, a Chow Chow is often aloof, loyal, and independent. So, when choosing your puppy, be sure to consider both the breed temperament and the individual puppy’s temperament.

Will a puppy’s temperament change?

Your puppy’s temperament is their genetic predisposition to behave a certain way – so, to be more specific, your puppy’s personality can change, but their underlying temperament will not. Generally speaking, a puppy with a nervous temperament is more likely to develop an anxious and clingy personality later on. Your pup’s personality is influenced by both life experiences and genetics. A frightening experience during a critical period can quickly turn your puppy into a fearful, anxious individual who struggles to cope with scary situations.

What does temperament mean?

Puppy temperament testing is very important when choosing your new puppy. Be sure to consider which breed suits your lifestyle, as well as the individual temperament of your puppy of choice!