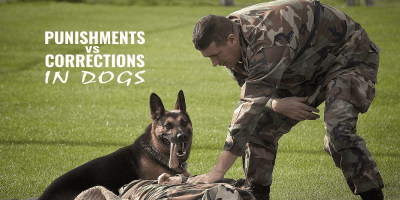 Punishment vs correction in dogs can be used interchangeably during training. However, both have different processes and different side effects. Many owners do not know the differences between these two terms and therefore if you are buying the time of a trainer, you will want to understand what techniques they use.

Furthermore, the difference between punishment and correction in dogs can affect your dog’s behavior almost permanently, and not always positively. Although, as owners, we want our dogs to behave and follow instructions, we do not want to scare our pups into doing this. Finding the correct way to adjust your pet’s behavior is key as a new owner.

What's the Difference Between Punishment and Correction in Dogs

Furthermore, punishment is often used out of anger due to a negative behavior taking place, such as you getting home and finding a cushion torn up. Dogs will know you are upset, but will not understand why. Their memories and actions do not work as ours do, they do not plan nor recall how ours do and therefore scolding is pointless. Also, punishment is often a way of scolding your dog that is inappropriate, can cause a fearful response, and damage your bond with your dog.

Correction, meanwhile, is the use of s stern voice, association, or other firm but non-aggressive/fear-inducing techniques. These only take place during or immediately after the event, so your dog understands that behavior is undesirable. This method is just as, if not more so effective when training a puppy or dog. It can also train your dog whilst not causing their bond with you to lessen, nor causing them fear, upset, or general distress. Which in itself should be enough to encourage its use, but furthermore, fear can lead to destructive or aggressive behavior.

Should You Ever Punish Your Dog?

There is never a need to punish your dog as your dog will be frightened. This may lead to negative behaviors such as urinating inside, obsessive licking, and even aggression towards you and other people. Your dog will be confused about the way you are behaving and not link it to their behavior. Therefore, you will not actually accomplish the goal of preventing your dog from performing unwanted behavior. Lastly, punishing your dog can actually weaken the bond between you and your dog. This means that they may not trust you, not feel comfortable receiving or giving attention, and will struggle to learn any further tricks or behavior from you.

As owners, our first priority when owning a dog should be their welfare. Punishing your dog compromises their welfare and leads to a mistrusting pup who will struggle to form a bond with humans. You should never hit a dog, scream at a dog, or throw things at them. Inducing physical harm is no way to scold undesirable behavior when it can simply be replaced by a firm no alongside the touch of a clicker. Furthermore, correcting your dog’s behavior is an easier and beneficial training method for you and your pup. There are no real downsides.

Ways To Correct Your Dog's Behavior

It can be difficult to know where to start correcting your dog’s behavior. Avoiding punishing and the correct timing can both be worries you have. Don’t worry, we have labeled four of the best correction methods with explanations.

We do not recommend yelling at your dog, this is a form of punishment and will not benefit the situation. Instead, make a sudden high pitched noise or hiss at your dog when they perform a negative behavior or just after they have done so. For example, if your dog urinates inside, use an appropriate noise and then remove the dog outside. Your dog will begin to learn the association between the noise and the urination. This in combination with your dog receiving praise and treats when urinating outside will potty train them.

When you remove your dog from a situation by placing them in an area with no interaction or play, this is a time out. This is both a form of correction but can also be used to calm a dog down when they are hyperactive. Note that this will not work with all situations, such as with a dog with separation anxiety, which requires different care that is not a correction in this form.

Time out can be appropriate for dogs who are hyperactive or who are in the process of potty training. Your dog will develop a negative association with the undesirable behavior of being put in time out, similar to a child. When it comes to hyperactivity, you need to make sure that your dog is quietly and quickly lead to the time out room and is not pulled or yanked. This can cause your dog injuries. If there is no way to remove your hyperactive pooch, it may be worth calling a behaviorist or trainer.

Take Away the Toys

Sometimes removing stimulus can prevent a dog from performing a negative behavior. This works well with dogs who do not have aggressive guarding tendencies but do destructively chew toys. However, remember that a dog is not destructive to anger you. They do so to convey to you that they are either frustrated or enjoying themselves. Consider their energy levels and if they need stronger chew toys first. If destructive chewing continues to be a problem, you may have to remove all their toys until they begin to understand when to stop.

In this circumstance, you can remove the toy when your dog begins to remove some of the stuffing and reinforce this with a firm no or use of the clicker. Continuing this should make your dog associate the loss of their toy with its destruction, thereby preventing this behavior.

Some dogs will perform negative behaviors to try and gain your attention, especially attention-driven dog breeds. By providing attention when they do so, you may be negatively reinforcing this behavior and thereby will witness more of it. In this case, you will need to ignore your pup so they recognize that this behavior will not provide them with their desired outcome. This is often the case when they bark or paw at you.

If you find your dog barking at you until you stroke or cuddle them, it may be best to blank them until they cease the behavior, in which case you can positively reinforce the silence by stroking them. Make sure to offer no attention to your pup when they are demanding it as this will only cause the behavior to keep reoccurring.

What can be even better than correction is positive reinforcement? A method of using praise and treats to encourage wanted behavior. Even if you use this combined with corrective behavior, it is still one of the best training methods for multiple reasons. Positive reinforcement is obviously more enjoyable for your dog. Your dog will feel accomplished for being praised for behavior and strive to achieve it once more. For example, if you praise a puppy for urinating outside, they will do so again in hopes of a treat. Furthermore, this can strengthen your bond with your dog as they trust you and feel praised. Strive to base positive reinforcement as your main method of teaching for your dogs.

Punishment vs Correction in Dogs – FAQs

In order to make sure we have answered all your questions regarding punishment vs correction training and how it affects your dog, we have also gathered the five most searched questions.

What is the Difference Between Dog Discipline and Correction?

The main differences between correction and discipline (also known as punishment), are timings and goals. Correction is used to influence a dog’s behavior away from negative or undesirable actions. Punishment is used anytime after an undesirable behavior occurs to scold the dog, which often has little benefit. Punishment and discipline are often seen when an owner is not sure how to prevent a behavior. It is important to remember that dogs are not like children, they do not remember what they have done and therefore punishment is next to useless. It will scare and upset your dog and even make training more difficult in the future.

How to Discipline a Bad Dog?

A badly behaved dog is one who requires understanding, patience, and appropriate training, not punishment or discipline. If a dog is behaving badly, usually there is a reason because of it. Identifying this reason will allow you to treat it effectively. Here are some behaviors which owners consider bad and their possible reasons:

These are just a few behaviors and some causes. But as you can see, you cannot simplify a dog’s negative behavior and treat it with punishment. Often, a dog may need walking more, more effort put into place to calming their anxieties or even a vet trip. Consider this before training, and once you begin training, use correction, association, and reinforcement to do so.

Is Punishment Effective for Dogs?

Directly it can stop an immediate problem, but there are many negative side effects.

Punishing a dog may lead to permanent or semi-permanent negative behaviors such as aggression, fear, or anxiety. These behaviors lead to a very unhappy dog that will most likely develop other negative behaviors to cope with the punishments provided. So the direct behavior you wish to cease may do so, but you may create three more undesirable behaviors. Most importantly though, this will increase the unhappiness of your dog. They may be fearful of you, hide in different rooms from people or have a higher tendency to show aggression due to anxiety.

What sort of Punishment do Dog Trainers use?

Most dog trainers will not use punishment and instead use negative reinforcement or negative association. Negative reinforcement is when a behavior is negatively reinforced without punishment, such as a dog chewing a cushion and it being removed from them. This will help them to learn that they are only allowed a cushion in their possession when they do not chew on it. Negative association, however, is when a behavior is associated with something negative.

An example of a negative association is when you tell a dog “no” sternly and take away their toy when they are ripping stuffing out of it. Trainers have different techniques and some may use punishment, we recommend researching a trainer before paying for their services to make sure their training is ethical and not just based around immediate results. Good training requires an understanding of the individual and patience.

What is Punitive Punishment for Dogs?

Punitive punishment for dogs is an immediate inflicted punishment which is often more severe. An example of this is yanking a dog’s leash when they pull, this is an immediate, preventative result. It will often stop the undesirable behavior but will cause physical, mental, and behavioral issues which may be much more long-term. We do not recommend using punitive punishment or trainers who implement these techniques.