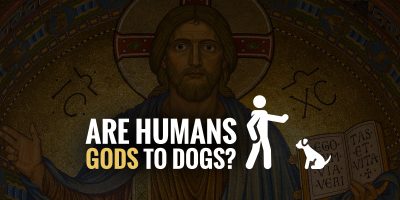 So, human, here you are confused and unsure; wondering if you are your dog’s God. Trust me, it is a common, though odd, belief that Humans are dogs’ Gods. This is especially true with those involved in dog breeding, there is some sort of all-deciding authority feeling. It’s odd, isn’t it?

Not just odd, arrogant rather. But you definitely are not alone at being so haughty to believe such a thing! And to cut the long story short, a Human is nobody’s God and even less his own dog’s God. Thinking otherwise is pure delusion of grandeur.

If you can’t hear it, let’s try and put ourselves in a dog’s paws, alright? While there, let’s compare do’s and don’ts of dogs and humans.

Snoopy the dog can do a lot

It’s true, Snoopy quickly after landing in his family realized how much he could do that Rick, his human, simply cannot.

Have you seen a dog and a person racing? Well, it’s only one of many things Humans are just so bad at…

So Who Is The God?

It is true that Rick goes daily to work, and works hard to try and keep the big fancy cave over Snoopy’s head, but Snoopy has no idea of all this. Moreover, it is true that Rick understands numerous complex words and conveys these words through his thoughts as well as his feelings in writing or in speech, but Snoopy has no idea of all this. Again, Rick produces strange and incomprehensible barking sound to Snoopy. Rick owns a strange device that he carries always. Guess what! The device makes clicking sounds, and barking sounds, and buzzing sounds, and informs Rick when it is going to rain. Snoopy doesn’t need a help of this device to know it was going to rain.

Definitely, Snoopy DOES NOT see Rick as a God. Instead, Rick is just a large, rather slow pet; that walks aimlessly and strangely, rather stupid and barks strangely, but Rick is rather bossy to Snoopy in spite of his obvious inferiority. Rick is bald and must put on a different fur depending on the situation: in his bed, for walkies, during winter, during summer, and a weird over-the-head thin fur when it is raining. The latter keeping one limb busy and useless for hunting or anything else.

Rick is not that bad, though. Rick has abnormal bald paws that enable him to open the door to access the cold food-keeping place. Rick has the ability to open and close the wall of our big fancy shelter, something that enables him and Snoopy to go out on amazing adventures.

Funnily enough, despite being branded slow and stupid by Snoopy, Rick does most of the hunting, enabling him to come back with many strange square skins, usually very tasty despite being a little dry and blood-free. Sometimes, Rick tends to share his own foods, and they often drop. Rick really dislike eating off the cave floor and misses out on the yummiest bits. But that’s our way of sharing.

Rick always follows Snoopy everywhere while on adventures. Rick seems to collect Snoopy’s poop which leaves Snoopy a little surprised every time. I mean, what’s so special in it that Rick wants it so bad, every single time?

It is true that Rick stops Snoopy from chasing the devil demons and the antichrists, even though Snoopy only tries to save Rick. In most cases, Rick makes use of his very odd bald paws to make the flying things disappear, but it makes them even more appealing to run after. Snoopy thinks it’s a wonderful idea seeing Rick having so much fun. Chasing and catching flies makes Snoopy feel honored, and it’s a good practice for the day Snoopy will get lost and left to its own devices to finally hunt the evil demons and antichrists.

With hindsight, Rick is a rather better sort. He hates sharing food, or the couch, or the bed, and in his mind, he thinks that he is the boss out there, which is disturbing, but he gives butt scratches, and his abnormal, strange bald feet help in keeping Snoopy’s belly warm every time Snoopy sleeps on them. Snoopy would be rather lonely, if not for his strange two-legged friend. Plus, and that’s always a bonus, Rick brings food home very consistently so until that changes, Snoopy will let life unfold naturally!

We got the idea of this blog post thanks to a question asked on Quora.