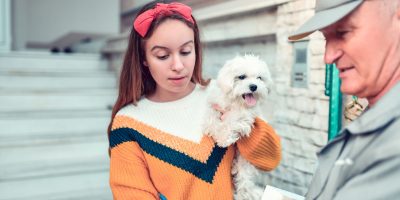 Incessantly barking dogs sprinting to the front yard to get to the mailbox? This could only mean one thing, the mailman is here! This is a typical scene many dog owners struggle with every day. Some dogs are even smart enough to predict the arrival of their “archenemy”. Other pooches get mad not only at the mailman but at anyone who drops by for delivery. But, why do dogs dislike mailmen? Let’s check out the possible reasons for this problematic dog behavior.

Why Do Dogs Hate Mailmen?

One of the challenges a postal carrier faces is handling countless angry dogs in homes. Dogs dislike mailmen because of fear, uncertainty, or territorial behavior. Many mailmen have had unfortunate encounters with dogs. Aside from being chased by these canine guards, mailmen are also at risk of dog bites.

So, postal workers use pepper spray or dog repellants to protect themselves against dog attacks. If they have to deal with this hazard all the time, they can report it to the post office. Then, you’ll receive a hold order or they’ll stop delivering to your house for safety reasons.

Going to the postal office to get your mail instead of receiving them at home can be inconvenient. So it’s important to find more effective ways to deal with this problem. But before that, let’s dig deeper and understand why dogs hate mailmen.

Territorial behavior is a natural survival strategy of dogs. In the wild, dogs instinctively protect their home and family. They mark their territory by urinating in small amounts in different places. Dogs can send signals to other species through the scent of their pee. Then, if someone invades their territory, they’ll alert the others through barking. And if this won’t send the invader away, that’s when they attack the invader.

Remember how man and dog companionship started a long time ago? It was because of the security services dogs offer to alert the villagers of any threats. Being territorial was not just natural to dogs but was also a nurtured trait. In fact, some dogs were intentionally bred to guard homes. So, they retained this inherent behavior. If your dog belongs to a guard dog breed, you’re likely to deal with territorial habits.

So, why do dogs bark at the mailman? Well, he is simply protecting his territory. In a study conducted in Japan, barking at unfamiliar visitors emerged as one of the top 3 dog behavioral issues. Since the mailman is a stranger to your dog, he’ll bark to let you know someone unfamiliar has arrived.

Trying to Chase Away The Mailman

If barking won’t shoo the mailman away, your dog will think of other ways to protect his home. Plus, he notices the same uniformed man keeps coming back. So, your pooch will try to chase him away. Since the mailman reacts by running away from your house, your dog would think his new strategy works. Chasing is another guarding instinct of dogs. And the more you run, the more dogs will chase you. This happens more likely to herding breeds.

However, sometimes dogs chase not because they are angry. Aggression isn’t always the answer to a common question, “why do dogs chase mailmen”.They also run when they are excited or they want to play. Their loud barking doesn’t necessarily mean they are angry either. Dogs can get very friendly especially if they don’t see a lot of humans at home. So, they get excited and start playing by chasing the visitor. But, this behavior could be hard to decipher for the mailman. If he isn’t familiar with your dog, he’ll automatically think it’s aggression.

Your Dog Is Anxious

According to a 2020 study in Finland, 72.5% of dogs develop some form of anxiety. 15% of these were related to fear of strangers. The same study revealed that aggression is one of the signs of fear in dogs towards unfamiliar visitors. Anxious dogs may also exhibit destructive behavior, excessive barking, or sometimes even depression.

If you notice these signs, anxiety can be the reason behind your dog’s negative behavior toward the mailman. Untreated anxiety can be dangerous as it can progress into biting behavior. Fearful dogs tend to bite to protect themselves. They lack confidence so they think anything around them can be a threat. Aggression is the leading cause of dogs being brought to shelters or worse, put to sleep. It’s critical to act on your dog’s anxiety before it develops into more problematic behaviors.

Unknown to many of us, fear and anger cause a release of certain chemicals in your dog’s body. Your dog may experience an adrenaline rush when he gets scared of something, including the presence of the mailman. And when your pooch gets angry, he’ll feel not only the increase in adrenaline but also the chemical noradrenaline in his body. This chemical triggers his fight-or-flight reaction to stimuli. The rush of hormones can be addicting to your furry pal. That is why you’ll notice the behavior becomes repetitive.

It Becomes a Habit

Dogs live their daily lives according to the routines they are used to. The mailman’s arrival becomes a familiar pattern to your dog because of two reasons. He arrives at the same time of the day and goes to the same location, the mailbox. Plus, he is wearing the same uniform, too.

And when your dog receives no correction for his bad behavior, it can easily become a habit.

You’ll notice they’ll get smarter and expect the postman’s arrival even before he is there. Your dog gets familiar with the scent, the sound of the truck, the uniform, or even the footsteps of the intruder. His automatic response almost becomes reflexive due to the bad habit he has developed. He’ll even start patrolling the front yard before the post carrier gets the chance to drop your mail.

It Becomes a Behavior

What comes next to habit? Well, the barking, chasing, and attacking actions toward the mailman integrate into your dog’s personality. It becomes a generalized behavior. Then it expands not only toward the mailman but everyone who goes to your home for deliveries. Your dog will associate uniformed people with this bad habit and react aggressively toward them.

So, no visitor is safe in your house. The pizza guy, the plumber, or the maintenance guy, are your dog’s new targets for his attacks. What’s worse is when he starts to show this hostile behavior to your friends or relatives visiting your home. During emergencies, rescuers will have a hard time getting into your home.

Myths and Truths About Dogs and Mailmen

With the prevalence of this daily struggle of postal workers toward dogs comes the emergence of myths. Shared experiences of mail carriers evolved into certain beliefs. Let’s tackle the three most common myths and truths about postal carriers’ struggle against dogs.

How to Help Your Dog Accept The Mailman

A postal carrier’s job is not easy, but they are essential to society. Their tasks can be mentally and physically exhausting. The least we could do is to add to their stress because of our uncontrollable dogs. So, how can we help prevent dog aggression towards the mailman? Here are our tips.

Socialize Your Dog (Including Strangers)

Train your dog early. According to a study, owners who socialize their puppies before 20 weeks of age had less fearful pups. Those exposed to people and other dogs did not react negatively to loud noises such as thunder or vacuum. So, if you’re planning to get a puppy, begin socialization as early as you can.

Visit a professional to help assess the behavior of your dog. This will help spot issues like anxiety or depression. The earlier the diagnosis, the sooner he can receive proper treatment. It’s best to rule out these medical conditions before trying out other methods. Without medical intervention, other practices may be ineffective.

Keep Your Dog Away During The Delivery Time

If your dog isn’t ready to face the mailman without getting furious, it’s best to keep him away. Especially if you are still working on correcting his bad habits. Seeing the postman may rewire him back to his unpleasant behavior. Also, keeping your dog away ensures the mailman’s safety.

Start leaving some treats by the mailbox for your mailman to offer to your dog. This will help reshape your dog’s experience from negative to positive. Your dog will start to associate the mailman with treats. Also, leave a note with your dog’s name so the postal worker can call your dog by his name.

Do Not Let The Children Get The Mail

Dogs are already naturally protective of their home. All the more with their young family members. Letting your children get the mail will alert your dog to protect against the intruder. Avoid having to deal with this scenario by prohibiting kids from getting to the mailbox.

The mailman’s arrival may shake the entire street with dogs running toward every mailbox. But, as a dog owner, you can do your share to ease the burden of these delivery guys with the information we shared. Remember, you are responsible for keeping your neighborhood safe for every visitor.