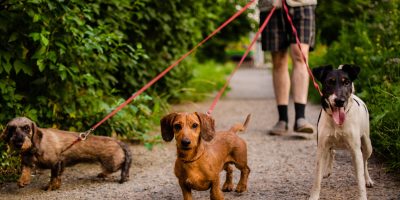 You may have the urge to adopt another dog to accompany your furry friend at home, but do dogs prefer to be with humans or other dogs? This question can confuse pet owners who notice their dog feels lonely, making them contemplate whether or not it needs a new canine friend or more time with their owners.

Aside from that, pet owners can also wish to have another family member, so they tend to get another furry friend. Adopting pets is an excellent idea, but do dogs like other dogs, or will they feel more anxious with new ones? You can read ahead to know more!

Do Dogs Prefer to be With Humans or Other Dogs

Payne et al. stated that symbiotic relationships between dogs and humans were already present 18,000 years ago. Since dogs have already developed strong bonds of relationships with their owners, significantly when they are already together since their younger days, they can prefer being with humans than with other dogs.

Researchers from the Eotvos Lorand University of Hungary published research in the Journal of Neuroscience, contrasting this idea. Their study used fMRI to examine 20 pet dogs and 30 humans to differentiate their brain activities in four different 2-second videos. These videos include one for a human face, one for the back of a human’s head, one for a dog’s face, and the other for the back of the dog’s head.

The data showed that humans and dogs prefer gazing at members of the same species rather than the opposite. The dogs’ brains were more active when they watched other dogs’ faces and back of heads than when they looked at humans. In this case, the researchers found that dogs like staring at other canine friends better than their owners’ faces.

On the other hand, Feuebacher and Wynne found a completely different answer to whether dogs are happier with other dogs. If the previous study favored their furry friends, this research evidence that dogs will prefer their human owners whenever they feel discomfort.

The researchers placed two groups of dogs, owners, and strangers in two places: one in an unfamiliar room on a college campus and the other in their home. The gathered data indicated that the dog spent 80% of its time interacting with its owner in a strange place, while the other spent 70% with strangers in a familiar home.

Feuebacher and Wynne explained that dogs show secure-base effects, where they only have the urge to explore and play with strangers when they are with their owner in a familiar place. In contrast, even if other people and dogs are in an unfamiliar spot, they will still look for their owners.

Studies About Dogs' Love for Their Human

Berns et al. conducted an fMRI study to examine the canine brain responses to human and dog scents if you are wondering if our dogs are happy with humans. They focused on the brain part (caudate) associated with positive feelings and rewards to analyze the emotional reactions of these canines to different stimuli.

The researchers found that dogs will show more positive reactions to the smell of their owners than other people and dogs. It also evidenced that dogs have a more positive association with the scent of familiar humans.

You can read ahead to know why “no” answers the question, are dogs happier with another dog?

Michael Hennessey of Wright State University, with David Tuber, Julia Miller, and Suzanne Sanders of Ohio State University, published a research report in the Journal of Comparative Psychology. They wanted to know how domesticated pet dogs can be and why their orientation is more to humans than other dogs.

The research involved eight 7 to 9-year-old mixed breed dogs living together as littermates in kennels since their eighth week of age. They have become fully socialized since they were young and became comfortable around humans. These dogs only have one human caretaker, which they believe is their owner.

These littermate pairs have not experienced being apart even for a few minutes. They have not also tried becoming separated for a long time in their entire lives. So, the researchers removed one member of each littermate pair. Then, they observed the remaining dogs for four hours to test their attachment.

The researchers expected the dogs to whimper and get distressed once they took their littermates away from their kennel. They also thought that they would only stop showing signs when they became reunited with their canine friends.

In this research, the dogs did not exhibit any sign or evidence of anxiety and distress when the researchers left them alone in their familiar kennel. They rarely paced or barked. Moreover, the stress hormone levels, or cortisol levels, in their blood did not change as they became separated from each other.

In contrast, when the researchers placed them in an unfamiliar pen with their partners, they showed evidence of apprehension, unease, and agitation. Their stress hormone levels also went up by 50%. Hennessey then explained that the increase in their anxiety levels only differed when they were in an unfamiliar place.

When the owner sat beside the dogs in the unfamiliar kennel, these canines stayed with the human to get comfort. This situation is unlikely when the dogs do not feel any assurance and safety from the presence of their partners.

As seen in the study, the researchers figured out that dogs tend to stay, interact, and make contact with their human caretakers more than their littermate partners in times of discomfort and worry. Their comfort-seeking behavior will still look for their owners’ actions and comfort to reduce their anxiety levels.

In the results, the dogs’ stress hormone levels remained normal in the presence of the caretaker, unlike the high levels with their kennel mates. Despite being in the same unfamiliar pen with their partners, they did not seem to get an easement from them.

The researchers then concluded that dogs build stronger relationships with humans than their brothers and sisters despite the long years they have been in company together in the same litter. Even though they did not experience being apart in their entire lifetime, they will not feel worried without their partners as much as they agitate without their owners.

Do Dogs Need a Companion?

Do dogs do better with another dog? Canines are one of the friendliest wild animals in the world. Despite their ability to make friends with their human owners, they can be picky when choosing their fellow canine friends. You can think of adopting a new dog in no time, but you must consider the following things below before getting one.

Your Dog's Behavior With Other Dogs

Even though your dog feels comfortable with its human owners, it can still feel unease with canines. Domestic dogs that did not experience socializing since birth will not go along with other dogs well. They can get aggressive or anxious, so you must not adopt a new furry friend without conditioning your present dog.

Your Dog's Response to Other Pets

Dogs can also feel jealous, protective, and possessive, especially when they see other pets inside the same household. Since they see them as rivals, they can feel threatened, making them growl, whine, attack, or be aggressive to these animals. In this case, do not put your domestic dog with new house pets.

The Behavior of Your Dog After the Play Date

Dogs will show different reactions after going on a playdate. Those canine friends that are fine being alone tend to feel emotionless and laid back, while others become sad and depressed. If your dog is unhappy after going home, you can consider getting another one because your dog wants to have a friend.

Knowing your dog’s temperaments and personality will help you decide whether or not it is ready to have another friend in the house. For instance, dogs with behavioral problems, such as aggression, must not be in the same place with other canine friends because they will not get along.

Like personality, a dog’s gender will also determine its compatibility with other canines. If you put two males in one household, they can be prone to dog fights. They will try to dominate each other. So, you can put one male and one female together while ensuring their sizes are not that different.

How to Develop Your Relationship With Your Dog

If you have already decided about adopting a new furry friend, developing its relationship with your present dog comes next. Making them get along happily will enable you to create a friendlier household. You can follow these tips below to ensure you will not encounter problems regarding your house pets.

Dogs will fight for dominance if there are many of them in one place. In this case, you must act as their pack leader so they will follow you. Research by Benz-Schwarzburg et al. explained that humans are in command of power in dogs. Canines understand and follow their owner’s actions, gestures, and emotions.

Dogs will take time to adjust to having a new dog in the house. The time can depend on their gender and personality differences. While this process is a long waiting game, you must remain patient as they accept each other’s presence. You can also take them on long walks and do new activities to help them recognize one another.

Dogs can feel threatened and aggressive whenever a new one comes in. So, leaving them alone is not the best thing to do. It is better to watch your canine friends on their first days together. It is because they can initiate fights. You can supervise their actions and body postures to prevent unwanted consequences.

If you used to have one furry friend, bringing another can make it feel jealous and unloved. Do not pay more attention to the new dog to prevent things from worsening. It prevents making the other feel left out and ignored. Interacting with both dogs at the same frequency is the most advisable way of making them feel equally loved.

Dogs need alone time and personal space like humans. For instance, you must keep your dogs separated in the meantime to help them understand their boundaries. You can feed them with separate colored bowls in different corners. You can also give separate dog beds and mats so they will not feel threatened.

Since you have already read this article, you have found the answer to the question, do dogs prefer to be with humans or other dogs? You can always proceed with planning to adopt another furry friend for your present dog, but you must note the necessary factors. Otherwise, they can have dog fights you never want to happen.